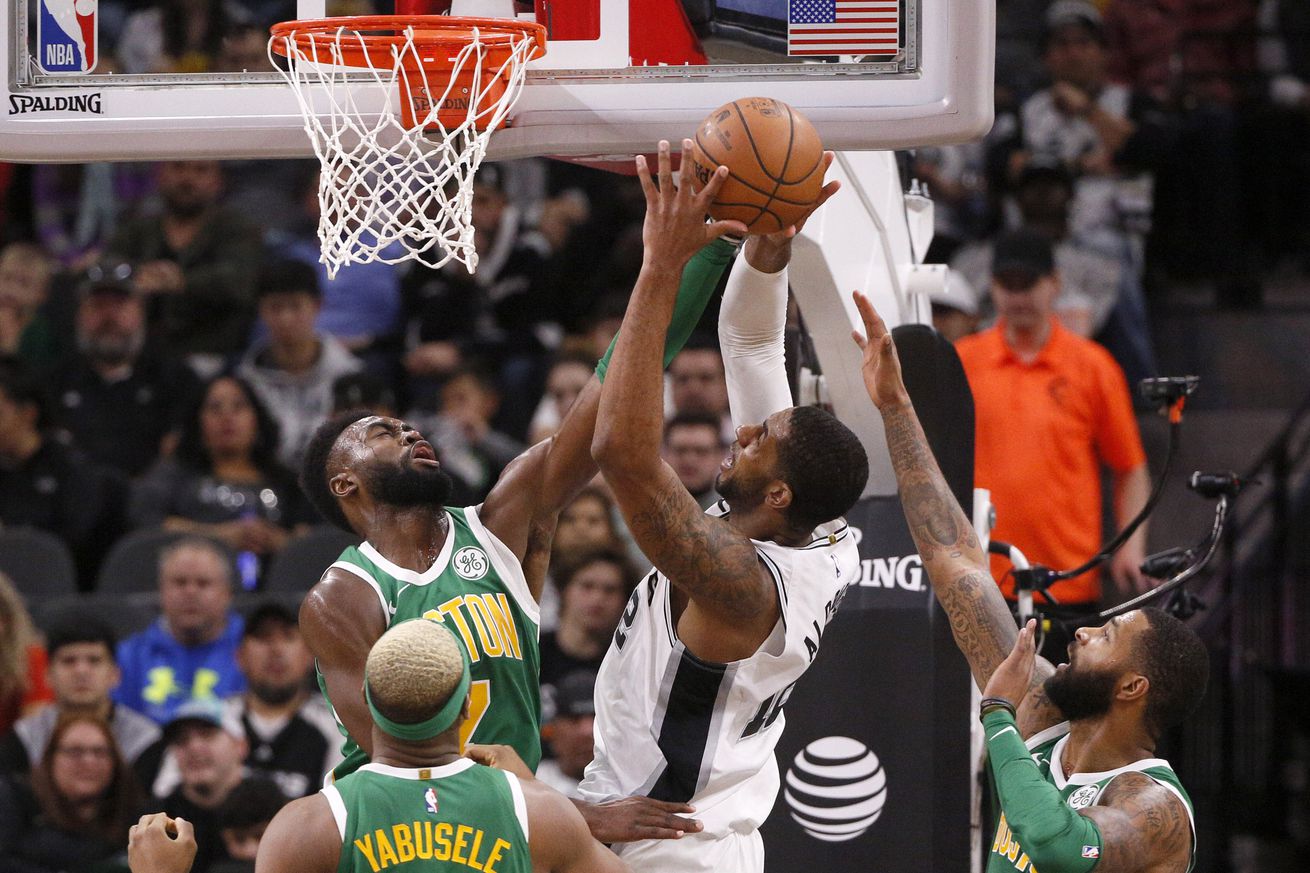 …and other good news about San Antonio’s offense.

Early in the season, teams were doubling LaMarcus Aldridge with impunity, but that time is over. In October and November, Aldridge was taking 6.3 post-ups a game, but making only 42% of the his shots generated on those possessions. That’s not just poor, it’s abysmal. But in December, he made 54% of his shots in 5.8 post attempts per game, which is an outstanding turnaround.

There is a hidden reason for this: early in the season and many times last season, poor passing out of the post and less than ideal weak side movement and finishing meant teams could consistently send double-teams, especially from the weak side baseline.

Recently, he is attacking earlier and more aggressively toward the middle, and consistently making the skip and cross-court passes that punish doubles from the weak side, rather than always kicking it out and forcing the perimeter players to try to swing the ball before the defense adjusts (or worse: forcing contested 17-foot baseline fade-aways himself).

If you compare Tim Duncan’s late career left block post-ups and early San Antonio Aldridge post-ups, you’ll see he is looking a lot more like the old Duncan in his spacing, timing, and passing decisions now than like the old LMA. At the same time, his teammates are doing a better job moving strategically off the ball on the weak side. Again, I don’t have any double-team stats to back this up, but the result seems to be more single coverage and better scoring opportunities out of the post on doubles. (Looking at you, Rudy “I get open corner threes” Gay.)

But early-attacks and improved passing aren’t the only changes of note. Both DeRozan and Aldridge are shooting high percentages on their shots between 5-9 feet from the basket — and they’re shooting from that range at a higher volume. While analytics sometimes lump 5-to-9 shots in with the rest of a team’s mid-range looks, the Spurs proficiency just outside the restricted area bodes well for their performance as defenses tighten up on allowing open lanes and spot-up threes.

DeMar DeRozan is shooting 48% on 5-9 foot shots on 3.2 attempts per game (2nd most in the NBA). Aldridge is shooting 46% on 2.9 attempts (6th most in the NBA), but his December percentage is a blistering 54%. In particular, his right handed baby hook has looked exceptional, and given the smaller size of many teams’ bigs, it’s going to continue to be a high percentage shot for him going to the middle, which is something his game really needed.

Shooting decently from near-midrange improves overall shooting percentages by forcing opponents to be ready to contest earlier, which frees up space for drop-offs and drives into the 0-5 foot range, where Aldridge is shooting 79% in December, Gay 70%, DeRozan 72%, and Jakob Poeltl 65%.

Aldridge is a lethal weapon on his own when he isn’t doubled, but learning to handle the double-teams that bogged the Spurs’ offense down early in the season has opened up an entirely new range of options. If the Spurs keep making the right decisions in these situations, their already-elite offense will actually improve.