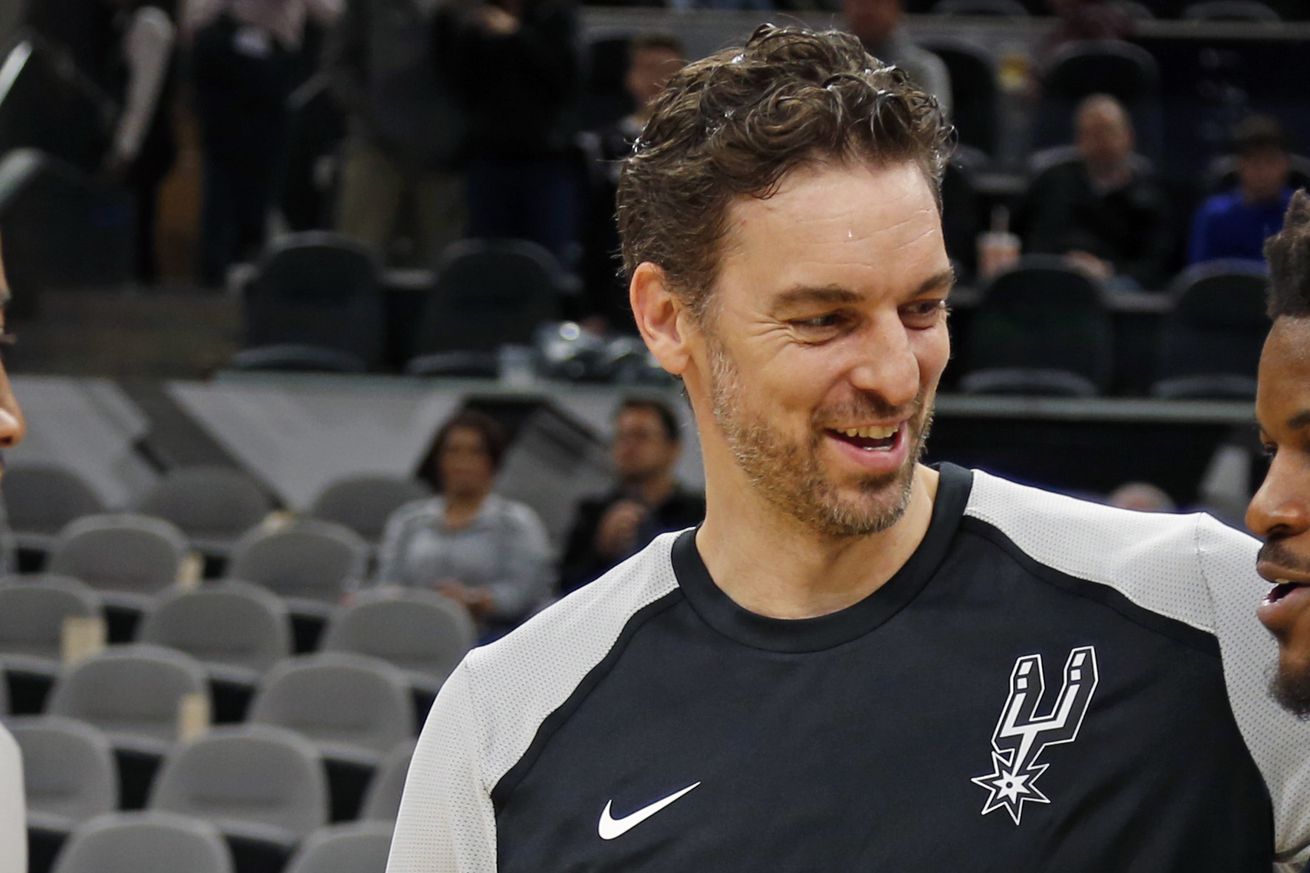 Gasol’s return seems imminent, and finding a way to insert him back into the lineup could be tricky.

Pau Gasol has missed the past 26 games with a stress fracture in his left foot. While the Spurs have yet to put an official date to Gasol’s return, he’s been participating in shootaround and should be back on the court sooner rather than later. What I’ve been trying to wrap my head around lately is whether or not Gasol’s return is good for the Spurs. The Spurs have finally settled into regular rotations, which is something I haven’t seen in nearly two years. The result has been spectacular, as the Spurs have been arguably the best team in the NBA the past three weeks. Gasol had been playing 18 minutes a game before his injury, but finding 18 minutes in the rotation could be difficult given the makeup of the Spurs’ roster.

The Spurs’ rotation is shorter than past seasons

Coach Pop has been deploying a strict nine-man rotation since rightfully deciding Dante Cunningham should not be part of the regular rotation. This is a solid number for the playoffs, but the Spurs have traditionally given 10-11 players regular minutes during the regular season. With that in mind, it seems natural that once Gasol is ready for action, he will be added to the rotation. While this is likely the case, should it be?

Despite the shorter-than-usual rotation, Aldridge’s minutes have gone down from 35 a game earlier in the season to 28 in December. Some of this has been the result of multiple blowouts, but some of it has been due to the emergence of Jakob Poeltl. Before Gasol went down, Poeltl was a non-factor. Some games he never saw the court, and others he only saw the court during garbage time. I remember watching YouTube videos in the summer of Poeltl setting strong screens, diving to the rim during pick-and-rolls, and showing remarkable touch around the rim for a big man. None of those skills were on display early in the season.

The first couple weeks after Gasol’s injury were rough. Aldridge was still logging 36 minutes a game, and a lack of rest seemed to be having a negative impact on his game. Poeltl was still not getting regular minutes, and he was struggling to find rhythm within the Spurs’ system. I can’t pinpoint the exact moment it happened, but I remember watching a game in late November where the Spurs started running the high screen-and-roll with Poeltl, and it was a thing of beauty.

Since then, Poeltl has been playing nearly 20 minutes a game, and has been averaging a tidy eight points, 6.5 boards, 1.3 assists, and 1.1 blocks. Poeltl also is tied with Davis Bertans for the highest net rating of any Spurs’ player. More importantly, his strong play – along with Marco Belinelli regaining his form – has helped resurrect the foreign legion of the past.

The Spurs have found rotations that work, and they have been able to do so without any of their bigs playing more than Aldridge’s 28 a game. That is good news for the Spurs, but it makes it tricky when discussing the return of Gasol.

The foreign legion is back in business

After taking a few years off, the foreign legion is back, wreaking havoc on opposing benches. After a slow start to the season, the Spurs currently have a top five bench in terms of scoring per 36 and efficiency. They are tops in the NBA in three point shooting. The most amazing part of the Spurs’ bench is that they have been able to dominate the opposition without a single bench player averaging more than ten points a game. They play team basketball in a way that looks oddly similar to the “Beautiful Game” Spurs of the past.

During the Spurs recent 8-2 stretch, the bench unit of Patty Mills, Bertans, Belinelli, and Poeltl have a ridiculous net rating of +40 in 73 minutes of action. They have a positive net rating no matter who fills in as the fifth person in the lineup.

DeRozan being the fifth has been particularly impressive. A strong ball-handler, a rim runner, and a plethora of shooters is the definition of the modern NBA offense, and the Spurs are running it to perfection.

It’s hard to say where Gasol would fit into this equation. Gasol’s strongest – and probably only – assets at this stage of his career are passing from the top of the key to a big in the post, spreading the floor, and protecting the rim. His passing wouldn’t be as useful with Poeltl, as post scoring is not a strength of Poeltl at this stage of his career. Gasol’s ability to spread the floor is also not needed, as Mills, Belinelli, and Bertans provide ample spacing, and do it better than Gasol. As far as protecting the rim is concerned, Poeltl does a good enough job. Even if Gasol is a slightly better rim protector, I’m not sure it’s worth eating into Poeltl’s minutes.

Can Gasol and Poeltl coexist?

While I have been ecstatic with Poeltl’s play, he is strictly a center, which doesn’t provide a lot of lineup flexibility. Gasol has the ability to stretch the floor, but his inability to guard players outside the painted area makes for an awkward fit alongside Poeltl. These two didn’t share the court at all before Gasol got injured, so there’s no historical data to make judgements one way or another.

Without any useful data to go off of this season, I decided to see how the Toronto Raptors utilized Poeltl inside their lineups last season. Poeltl played the most minutes – 1090 in total – with Pascal Siakam, who is a versatile stretch four. By contrast, Poeltl played a grand total of zero minutes with Jonas Valanciunas or Lucas Nogueira, the two other traditional centers on the Raptors’ roster last season.

I’m sure Pop will experiment with both Gasol and Poeltl in the same lineup, but I’m not sure playing them together for long stretches will be a recipe for success.

The other option for Coach Pop is to start Gasol alongside Aldridge. The Spurs have been playing small lately, with DeRozan at the three, Gay at the four, and Aldridge at the five. It’s hard to know whether or not Pop has embraced small-ball, or if he’s been playing this way out of necessity. With the Spurs having an 8-2 record with an NBA best +18 net rating over the past ten games, it would be difficult for Pop to make a major change in the rotation for the foreseeable future.

Despite the modern NBA moving away from having two traditional bigs in the same lineup, there are a few teams still utilizing this tactic. The Spurs have been one of those teams in recent years. Just last game the Denver Nuggets played both Mason Plumlee and Nikola Jokic in the same lineup. It’s possible Pop would have countered with Gasol in the starting lineup had he been healthy, but the Spurs’ starters were able to hang with the starting lineup of the Nuggets by staying small.

I believe Pop will toy with Gasol in the starting lineup when it makes sense, but I’m more worried about the games where it doesn’t make sense. There are a couple scenarios in particular that make me nervous.

The first scenario involves trying to fit a square peg into a round hole by moving Gasol into the starting lineup on a more permanent basis. I think Gasol’s passing ability could help Aldridge, but Aldridge has been terrific the past month without Gasol. Gasol starting would push Derrick White out of the starting lineup, and possibly out of the rotation altogether. White is showing us more and more lately, and his perimeter defense is much needed in the starting lineup.

The second scenario is Pop choosing to go with Gasol over Poeltl in the second unit, pushing Poeltl out of the regular rotation. Even limiting Poeltl’s minutes at this point would make me upset. He’s the future of the Spurs, not Gasol.

With no obvious fit in the Spurs rotation, is Gasol expendable?

Gasol is too valuable to be a backup to the backup, but I don’t like the idea of breaking up what’s been a very good thing as of late. Gasol could be used as depth in case of an injury to Aldridge or Poeltl, but that feels like a waste. With that in mind, should the Spurs look to trade Gasol?

While technically DeRozan’s minutes have gone down from 37 in October to 34 in December, his reduction in minutes can be strongly correlated to the Spurs string of recent blowouts. During the games the Spurs have not blown out their opponent, DeRozan has still been averaging over 38 minutes a game. That’s too many minutes over the course of an entire season. It’s possible Lonnie Walker could join the rotation at some point, affording DeRozan a few more minutes of rest each game.

Another option would be to trade Gasol and his mostly-expiring contract for a wing defender. While the Spurs’ defense has been the best in the NBA during the past ten games, it’s been because of excellent team defense. Adding a player with strong one-on-one defensive skills could be important if the Spurs hope to make a deep playoff run. Kent Bazemore comes to mind as an option. He’s making around 18 million this season and next, but he’s a strong defender, and his offense is starting to come around after a slow start to the season. The dream would be Robert Covington, as his fit would be perfect with this iteration of the Spurs, but trading for him would likely be far too expensive.

I’m sure all of the above options will be thoroughly discussed by the Spurs coaching staff and front office, and I trust that they will figure it out. I believe that ultimately Gasol will find a place in the regular rotation, for better or worse. I’m personally not a huge fan of his game, but I do understand what he brings to the team. If it were up to me, I would look to trade Gasol for wing depth, but that’s probably why I’m just a couch GM.