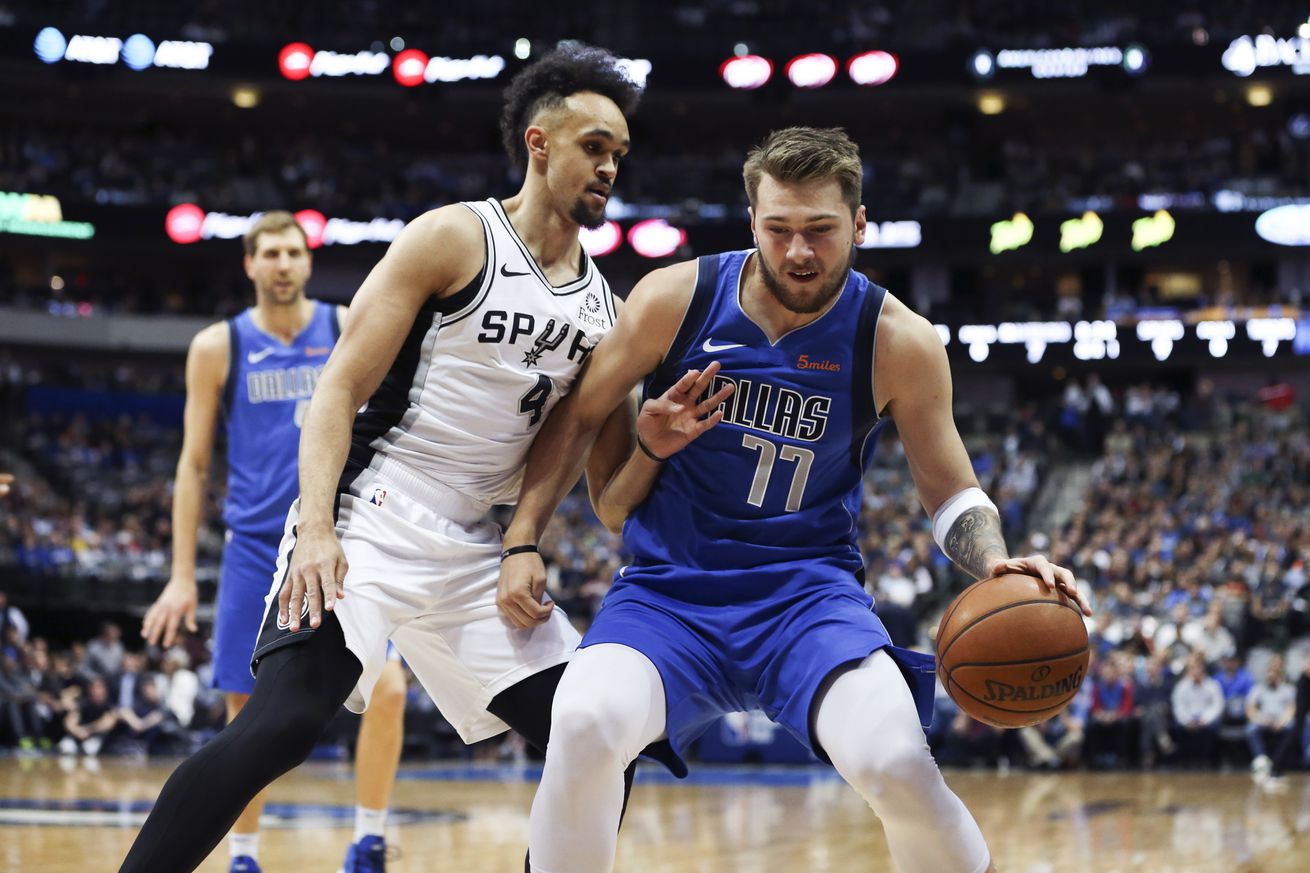 Deflections and steals were a key part of the Spurs win in Dallas.

The Spurs relied on an uncharacteristically active and engaged defense to help extend their season-best win streak to 6 games by defeating the Mavericks on Tuesday night. With 19 deflections and 11 steals, the Spurs repeatedly disrupted the Mavs’ offense.

DeMar DeRozan, LaMarcus Aldridge, and Derrick White each had incredible nights on the other end, combining to score 84 of the team’s 112 points, but their work on defense was just as important. DeMar led the team with 7 deflections and 4 steals, while Derrick was second with 3 of each.

DeMar’s deflections and steals came primarily from jumping passing lanes and while playing free safety on the weak side. He was consistently in the right position and aware of every player on the court, enabling him to get to a lot of balls he normally doesn’t.

That sort of activity is par for the course for Derrick, but he crammed all of his steals into just 35 seconds of game time. Derrick ended the 3rd quarter by poking the ball away from Luka Doncic, then kicked off the 4th by picking off his first two passes. The 2nd of those, which ended with LaMarcus throwing it down in transition, was a beautiful read.

This is the Mavs’ Spain Pick and Roll (again). But unlike the teams’ previous meetings, the Spurs are all over it here.

As Dwight Powell sets up to screen Derrick White towards the right side of the floor, LaMarcus drops deep into the paint to avoid getting backscreened by Tim Hardaway Jr. With no big waiting on the other side of the screen, Doncic would be looking at an open three, but the Spurs execute the guard switch to perfection, with Bryn Forbes running out to Doncic and Derrick veering back to pick up Hardaway as he pops to the left wing.

The most impressive part is how preternaturally aware Derrick is as he recovers. He knows exactly where Hardaway is going and he knows exactly how Doncic is reading the floor. He looks more like a wide receiver running a route than a defender lunging to intercept a pass.

For his part, LaMarcus had just 1 steal and 1 deflection on the night, but that deflection was one of the most important plays of the game.

Trailing by 5 with just 1:30 to go, Doncic uses a drag screen from Powell to try to penetrate the defense.

Derrick fights through the screen and recovers before Doncic can capitalize. Take a look at his footwork. Derrick turns his lower body to run with Doncic but keeps his torso as square as he can, then stops on a dime once Doncic changes direction. LaMarcus, too, was tracking his drive and is all the way down to the restricted area by the time Doncic decides to pull it back out.

Maxi Kleber is waiting at the top of the key to set another screen for Doncic and draws the switch. Derrick doesn’t seem too happy about that, seemingly wanting Davis Bertans to sprint back to Kleber after he hedges and Doncic dribbles back towards half court. But this is the safer answer and despite Derrick’s admirable desire to check the other team’s most dangerous offensive player, Davis does a pretty good job.

Davis stops penetration to his right and stays close enough to Doncic to prevent the step back three, but that leaves him open for a drive to the left. Davis bumps then tries to stay in position to contest if Doncic shoots. Fortunately, Derrick is in excellent help position, having left Kleber in the weak side corner.

Doncic could’ve tried to hit Kleber, but DeMar wreaked havoc on the weak side the entire game on passes just like this. With Davis a half step behind Doncic on his right hip, the kick out to Dorian Finney-Smith on the right wing wouldn’t have been any safer, either. That leaves the drop off to Powell, and to be fair, it should’ve worked.

LaMarcus is far enough in the paint and far enough forward that if Powell makes this catch, he probably dunks it, or at the very least, draws a shooting foul. But LaMarcus uses all 7’5” of his wingspan to get a fingertip on the ball, knocking it just off course. It ricochets off Powell’s right hand and out of bounds, Spurs’ ball.

Derrick promptly drilled a step back jumper on the ensuing possession, giving the Spurs a 7 point lead and scoring what would end up being the game winning points.

There were still a lot of mistakes and too many easy buckets, but at least they were active and engaged, something that hasn’t always been the case this season, especially away from home. But they made the plays they had to, and when the offense is humming like it was in this game, that will usually be enough.