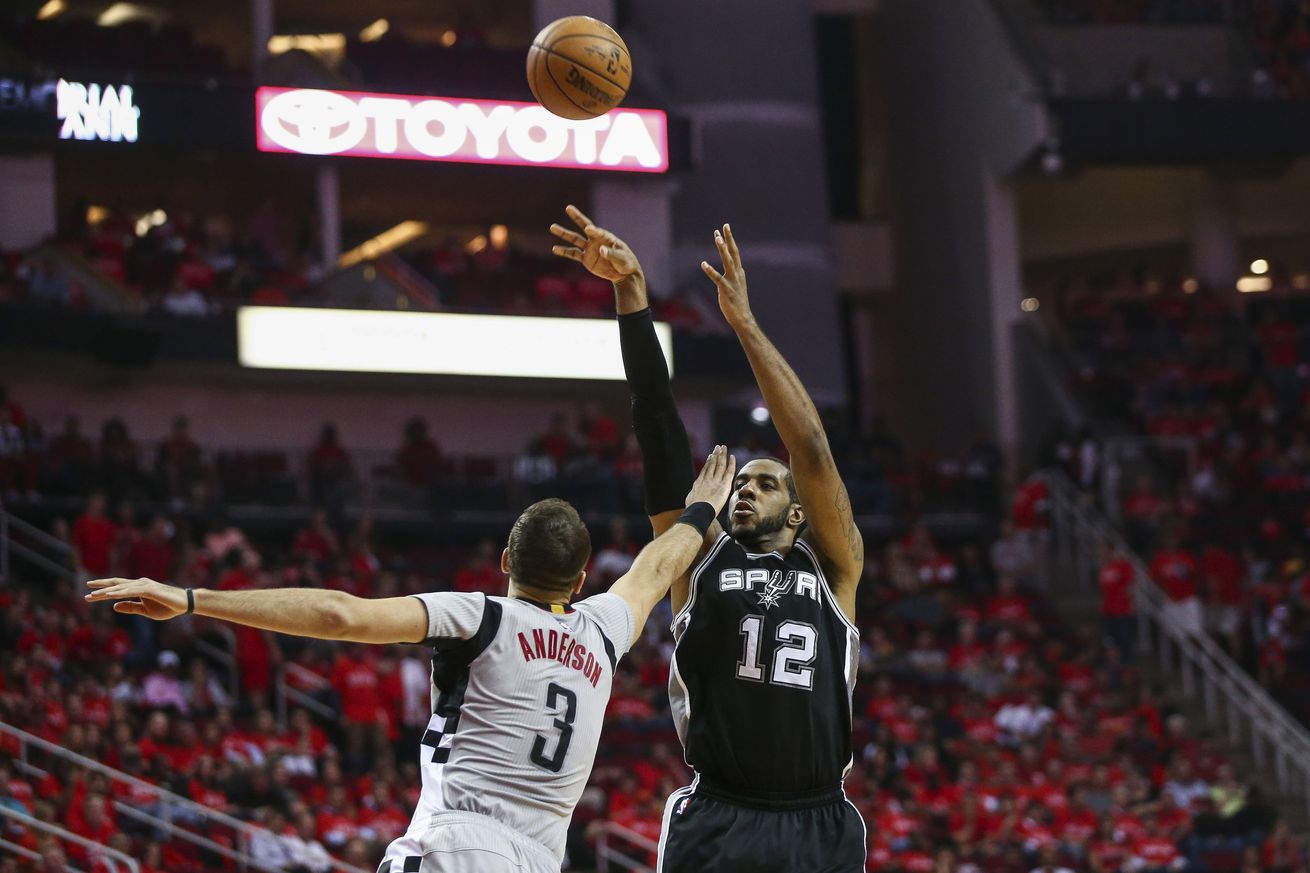 The Spurs dominated nearly every facet of the game in their closeout win in Houston.

If, before the San Antonio Spurs vs. Houston Rockets series began, you had told me that the Spurs would be without Tony Parker and Kawhi Leonard heading into a road Game 6, and that the competitive portion of the game would be over by halftime, I wouldn’t have been surprised. From the outside, it seemed like Gregg Popovich was content to cede Thursday night’s game to better their odds at a Game 7 victory at home. To nearly everyone’s surprise, San Antonio turned in one of its best two-way performances of the season, embarrassing the Rockets on their home floor, 114-75. For those who want to reduce this game up to “the Spurs made shots and the Rockets missed,” you can’t. That simply was not the whole story in this one.

First off, you have to credit the Spurs’ defense for cutting off the Rockets’ greatest sources of offense: fast break points and “open” and “wide open” threes (as defined by NBA.com). Limiting fast break points is simple – just don’t turn the ball over. The Spurs finished with eight turnovers and a Ball Control Index (see the Team Stats table below) of 5.00, their best mark of the series.

First, just look at how far back David Lee is playing this pick and roll!

Green does a great job fighting over the screen and Harden hesitates to pull up (possibly remembering Manu Ginobili’s block from behind at the end of OT in Game 5), and it ultimately leads to a contested long two by Ryan Anderson. When the Rockets got good looks from deep, they actually shot well, hitting 47.1% on open and wide open threes. But since San Antonio’s defense was so suffocating, it forced them into shooting 2 of 12 (16.7%) on tightly to very tightly contested triples.

Not only were the Spurs successful in preventing open threes, they positively barricaded the rim, too. The Rockets shot a miserable 6 for 32 (18.8%) at the rim, thanks mostly to the efforts of Pau Gasol, who led the game in shots defended at the rim, allowing opponents to go just 4 of 13 (30.8%) while he patrolled the tin. We’ve talked about his length before in prior Study Hall columns, but this was his best defensive performance of the playoffs so far.

Offensively, the Spurs’ performance was a throwback to a different era of basketball. Somewhere in Montana, Phil Jackson is cackling maniacally in a peyote-button-filled sweat lodge, because San Antonio definitively won this game from inside the three-point arc. San Antonio outscored Houston 62 to 18 in the paint and 30 to 0 in the midrange! Per NBA.com, the Spurs shot a scorching 12 of 15 on shots that came off a post touch. And, they went 15 of 22 (68.2%) on mid-range jumpers. Both of those figures can be heavily attributed to LaMarcus Aldridge’s ridiculously efficient 16 of 26 shooting performance that likely quieted a lot of his critics (for the night, at least). As Jeff Van Gundy noted in the telecast, Aldridge benefited from getting much deeper post touches than in previous games:

But, it also helped that he was on fire from the midrange. Without Leonard, the Spurs needed somebody to just get buckets, and Aldridge stepped up in a major way. Prior to Game 6, Van Gundy went on Zach Lowe’s podcast and said Aldridge needed to turn and face the basket and take more balanced mid-range jump shots instead of relying too heavily on his fadeaway. Aldridge seemed to take that advice:

There were so many positive things to take away from this game (a playoff high 32 assists, the stellar play of Jonathon Simmons, and I haven’t even mentioned Dejounte Murray’s defense!) that it can obscure the areas where the Spurs still need to improve heading into their matchup with the Golden State Warriors. San Antonio’s disturbing trend of missing “wide open” three-pointers continued, as they went just 1 for 10 on such shots. That’s after shooting 2 for 12 in Game 4 and 1 for 12 in Game 5 on wide open threes. Also, free throw shooting has been a bizarre bugaboo for this team — which is odd since they shot so well from the line through the regular season.

Spurs fans should be ecstatic that this team has been able to make it to the Western Conference Finals (again), especially given their injuries. Hopefully, this Game 6 victory will have given Leonard the time he needs to fully recover, and it will leave the Spurs’ other players feeling empowered and motivated heading into the next series.