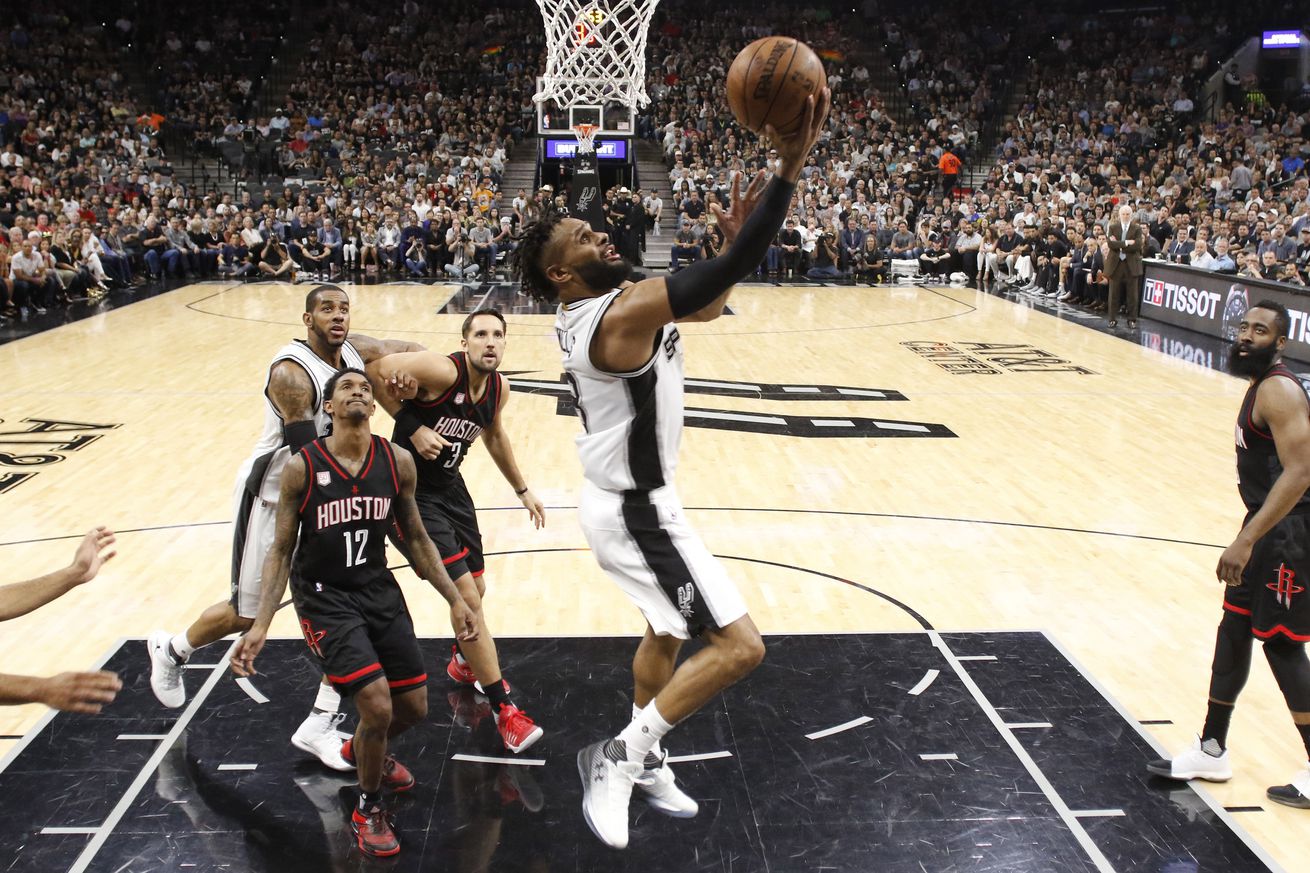 After an emotional Game 5 win, here’s a look at the X’s and O’s behind the plays that decided the game.

Five games into the Western Conference Semifinals, the major adjustments have been made by both teams, which led to the first nail-biter of the series. How did we get here?

Rockets Are Late to React, but Nene Injury Forces Them To

The natural response for Houston was playing Anderson at the five, which we saw in Game 4, although it only came after Nene was injured and Rockets coach Mike D’Antoni was forced to go in that direction. In Game 5, the Rockets started with four perimeter players, and played their five-out lineup (Anderson in for Capela) for a large chunk of the game:

Just look at the spacing in these two clips. You see it all the time in high school and AAU basketball. The NBA is trending in that direction, but the Rockets are a step ahead. This five-out strategy nullified the Spurs adjustments from Games 2 and 3. When you hedge out or zone up, you’re leaving the screener open, at least momentarily. That works when it’s Capela or Nene. And it works at times if you want to gamble on Ariza or Beverley going cold as the Spurs did with Ariza in Game 2. But five games in, those two guys have earned the respect of the defense. You just can’t leave Anderson, Ariza, Gordon, Beverley or Williams wide open right now.

Because of that, the Spurs were forced to revert back to switching onto Harden to prevent completely open 3-pointers. Above, it proves costly as Harden steps-back twice on David Lee. He drove past Aldridge multiple times in similar situations and finished with 33 points, 10 rebounds and 10 assists. This was a net win for the Rockets as Harden got what he wanted throughout the game and Anderson finished plus five with Capela a minus three. By the third quarter, the Spurs started helping more which freed up open perimeter shots. Luckily for the Spurs, the Rockets shot just 16-of-48 (33 percent) from deep, and the Spurs absolutely have to win games in the series when the Rockets shoot that poorly.

The Spurs countered Anderson at the five by going small with Jonathon Simmons and one big. This created room to attack seams and although the Spurs don’t have the pure scoring that Houston does, when they move the ball quickly, driving lanes open up that put pressure on the rim:

Look how far Harden sags off Simmons anticipating a Leonard drive. This gives Simmons room to rev his engine and attack the basket. When he drives, nobody can help as the Rockets get a taste of their own medicine. There were countless examples of Simmons, Ginobili and Green making critical drives that would not have been possible with Gasol and Aldridge on the floor together. Ginobili’s dunk. Ginobili’s drive to tie the game at 101 in regulation. Green’s hoop and the harm in overtime. It’s quite a list.

Another huge factor in this game was offensive rebounding:

Spurs have rebounded 29% of their own misses this series. Would have led league in reg season. Was a clear potential X factor for both teams

The Spurs had 18 offensive rebounds last night, 9 from Aldridge, and out-rebounded Houston overall 52-47. Aldridge was able to take advantage of the Rockets when both teams went small:

In this play, Green drives, and Anderson, the lone Rocket big, has to help off Aldridge, leaving LaMarcus under the basket all alone with Beverley trying to box him out. Aldridge is still not dominating offensively, opting to shoot fadeaways even against mismatches. But his offensive rebounding was game-saving, especially in crunch time.

Although the Spurs size was a key in Game 3 with Gasol and Aldridge effectively running high-low, Anderson at the five has made those lineups less playable. While that might be a slight edge for Houston, Aldridge allowing the Spurs to go small and still have an edge on the backboards helps tilt the equation back towards San Antonio.

The Rockets poor shooting night was Advantage Spurs, but Kawhi didn’t play in overtime or on the final play of regulation. It was a golden opportunity for the Rockets to steal the pivotal road game. But the Rockets were tired after going the whole way with just seven players. They stopped running their offense and Harden looked more like first-round Russell Westbrook, dribbling out of the shot clock before forcing a three, committing an offensive foul or turning the ball over, which he did nine times:

Rockets held ball down the stretch. If it’s by design why? If it’s not, why is D’Antoni not demanding movement? If tired, well you played 7.

On the other hand, with the Spurs’ MVP candidate sidelined, Gregg Popovich trusted a 39-year old and an ex D-Leaguer to run the offense. This hasn’t been a perfect playoffs for the Spurs coach, but after last night the questions go to D’Antoni: Montrezl Harrell can’t spell Capela for five minutes? Sam Dekker can’t give 10 minutes?

The Rockets are still capable of winning this series. But if they lose, they’ll look back at a 99-94 lead at the end of regulation, and an overtime period where the Spurs didn’t score for the first half of overtime, and wonder why they opted to employ a stalled-out isolation offense rather than slicing and dicing for the openings that had been available all game long.

For Game 6, healthy Leonard or not, the Spurs can’t expect the Rockets to miss so many open shots at home, so pulling out Game 5 was critical. Up 3-2 they’re the favorites, but Kawhi’s mobility looms large.