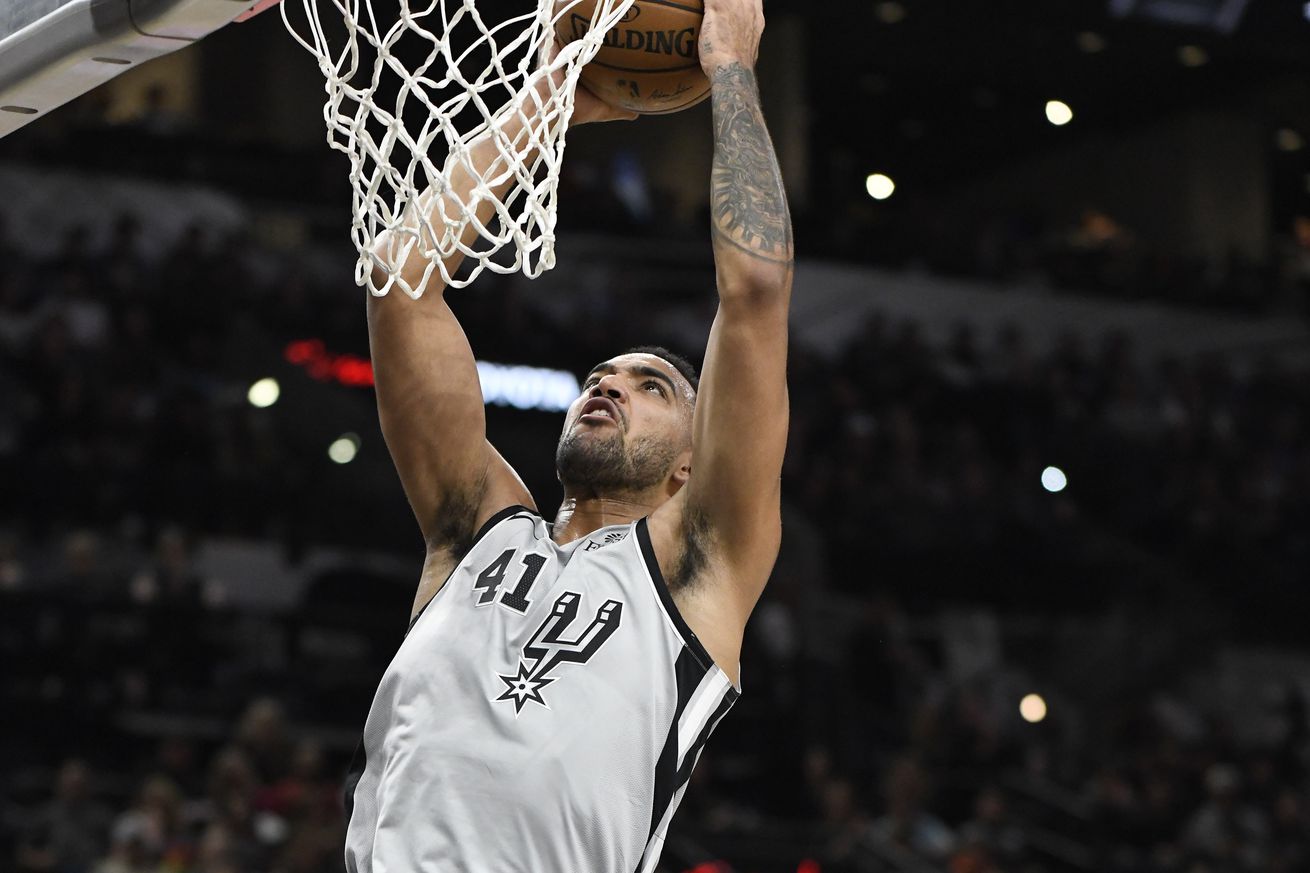 How the Spurs are winning more offensive rebounds than they have on the past.

Through two games of the 2019-20 season, the Spurs have mostly played to type. A team that led the league in midrange shots last season is out front by a comfortable margin again this year. As anticipated, they’ve taken a below average percentage of their shots at the rim and the fewest threes in the league. Despite their antiquated shot profile, they also continue to shoot well, posting the 6th highest eFG% in the league.

The biggest change in how the team plays on offense so far has been a dramatic increase in transition attempts catalyzed by the return of Dejounte Murray, though even that has left them outside the top 10 in frequency of transition plays. A close second, though, is the team’s new found success on the offensive boards.

After finishing last season with the lowest offensive rebound rate in the league, this year’s team has pulled down 33.3% of their available misses, far higher than at anytime in the last 15 years. While that number will certainly go down as the season progresses, there’s reason to believe the Spurs are taking a little more liberty to pursue an opportunity they’ve long forsaken in an effort to prevent fast breaks.

Against the Wizards, the Spurs’ offensive rebounding was especially noticeable because they shot relatively poorly on the whole and went through several cold spells that drew extra attention to their extra chances. The first play of the game was a pretty typical example of how they’ve long approached offensive rebounds, with one small change.

After LaMarcus Aldridge puts up the turnaround jumper, three players (Bryn Forbes, DeMar DeRozan and LaMarcus) start to get back on defense, while Trey Lyles crashes the glass. That’s all pretty common. Dejounte, though, is given a little freedom. Rather than get back, he moves into the paint just outside the scrum and comes down with the ball after Trey tips it out. Dejounte misses the putback and the ensuing tip before Trey comes down with his own board.

Trey kicks it out to Bryn who lines up a wide open three, but he misses, too. Dejounte swoops in for one final shot at the rebound, though he’s a step late and the Wizards bring it down.

There are several aspects of this play that make it a good opportunity to crash the glass. The Wizards don’t have a ton of speed on the court, nor much size. There’s also the fact that four Wizards are below the free throw line when the shot goes up, meaning that even once they get the rebound, it’ll be a footrace. The ability to win that footrace, especially with Dejounte on the court, makes offensive rebounding a little less costly.

The Spurs also sent two to the glass multiple times against the Wizards’ zone defense, which is one of the easiest way to punish zones.

None of this represents a dramatic change to the Spurs’ approach. Sending just one or two players to the glass is pretty common across the league. Whether the apparent freelancing by Dejounte and others is a part of the game plan or subject to a specific set of guidelines isn’t yet clear, but it makes sense that the team would seek to take advantage of their strengths, especially when the timing is right.

Against the Wizards, the Spurs had multiple players who are talented rebounders on the floor the entire game. For their positions, Jakob Poeltl and Murray are two of the best in the league on the offensive glass, and Aldridge, Rudy Gay and Derrick White are all above average as well. Trey has also shown a suprising knack for tracking down the ball given that he’s been a below average rebounder on offense and defense for most of his career.

When the Spurs find themselves with a similar size and speed advantage, it’s a good bet they’ll look to exploit the opportunity. In that respect, allowing Dejounte to gamble on that end makes a lot of sense. He has excellent instincts for the ball and even if he’s out of position to get back on defense, there’s a decent chance he can run down just about anybody on the way back up the court.

It’s just two games, but the Spurs have thus far been much more successful on the offensive glass than at any time in their recent history, despite not making any significant changes to their rebounding strategy. It’s unlikely they’ll continue at their current pace, but there’s enough evidence to suggest they’ll be much better at that aspect of the game this season than in years’ past.