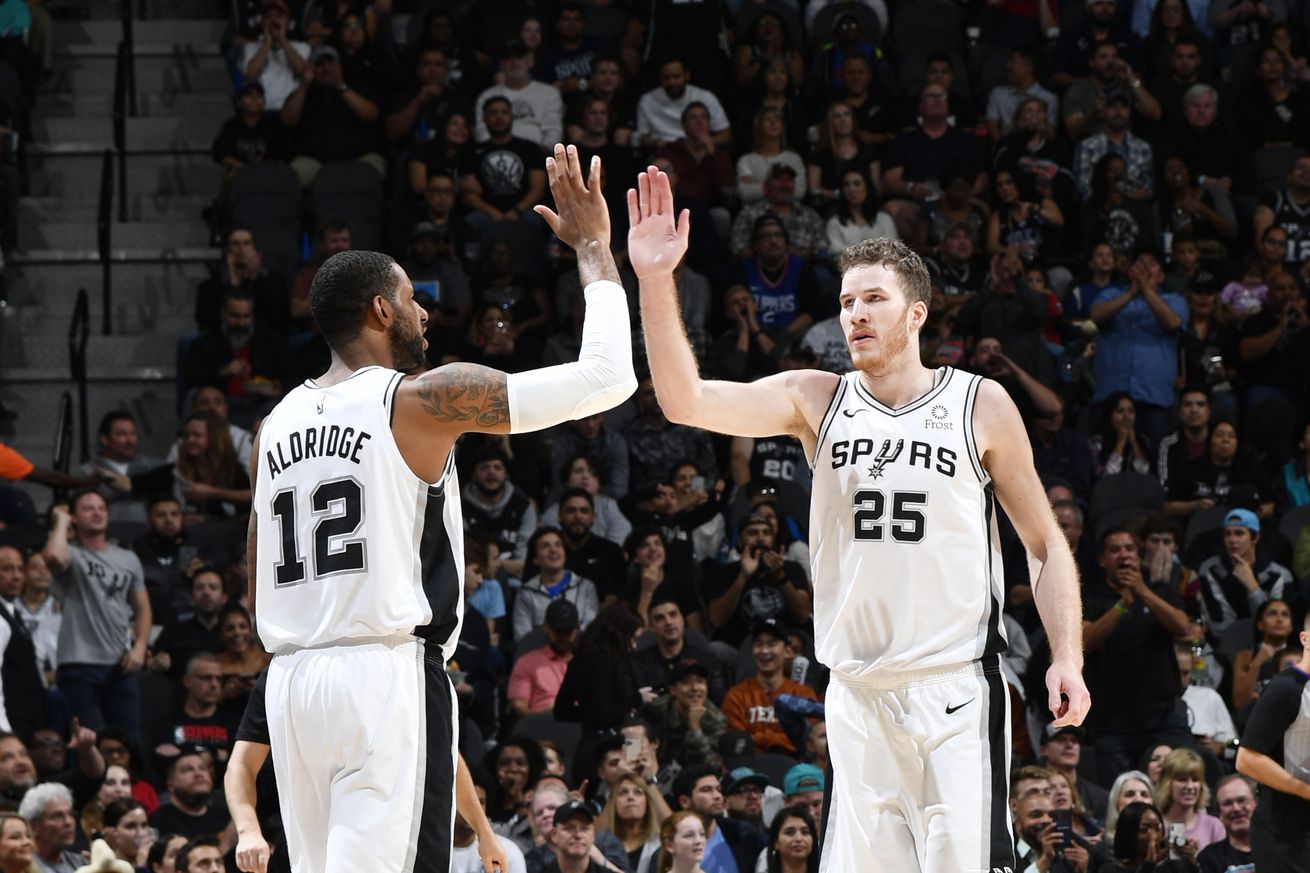 What one little rotation means for the Spurs’ season.

The Spurs’ surprising 107-97 victory over the Clippers on Friday night felt like a new beginning. After playing like a lottery bound afterthought for a few weeks in a row, the team desperately needed a solid end-to-end performance and, more importantly, a win. They got both at the expense of one of the best teams in the league playing at close to full strength and did so in convincing fashion.

One game can’t undo the damage of an eight-game losing streak in which the team dropped several winnable games, but they showed signs in this one of the kind of defensive integrity that would have won most of those contests. It wasn’t quite as dominant a performance as the scoreboard indicated at times – the Clippers were definitely not at their best – but the Spurs’ team defense did more than enough to earn a victory, even on a night when their offense was held mostly in check.

The Clippers’ 97 points on 101 possessions was their 3rd least efficient game of the season and easily the best performance of the year for the Spurs’ defense, especially once taking into account that the Clippers’ entered the game with the league’s 7th best offense. Some of that, at least, had to do with poor shooting nights from their two best players; Kawhi Leonard and Paul George shot a combined 10/34 from the field. But it was clear right from the jump that the Spurs were going to pay extra attention to both of them and live with the consequences.

Over the last three weeks, that would have meant a seemingly endless parade of dunks and open threes, but the Spurs showed a level of team-wide awareness, anticipation and communication in this game that has been so far impossible to rely on. A little over 4 minutes into the 2nd half, they showed all of that on a single possession.

First of all, let’s not get too crazy. This is not an overly complex rotation. Good defensive teams do this stuff consistently. But for the Silver and Black this year, defending as a 5-man unit instead of a collection of individuals has been a rare thing indeed. Still, this is a good example of what they can be, even when all five players on the floor aren’t especially talented individual defenders.

The play starts with Pistol action for Paul George on the right side. Patrick Beverly sets and then slips out of the screen with Ivaka Zubac waiting to flow right into a pick and roll.

Navigating the screen put Derrick on George’s hip, giving him just enough room to turn the corner. LaMarcus Aldridge and Rudy Gay, though, are all over it. LaMarcus is guarding Zubac, so he tracks the penetration and is ready to contest or recover to the Clippers’ big man, as necessary. Rudy’s responsibility as the low man on the weak side is to stop the penetration and block the pass along the baseline out to the corner.

Despite the fact that both are in excellent position, George reads the help early and whips a one-handed bullet on the run right to his intended target. But DeMar DeRozan is closing out to Maurice Harkless while the ball is still in the air, forcing him to swing it to Kawhi Leonard on the wing. For the Spurs, if they even made it this far, that’s usually been the end of a possession like this. The shooter on the wing usually lines up a wide open look and knocks it down. Not this time, though.

Like DeMar, Bryn moved on the pass, arriving just a moment after the catch. Leonard tosses it over to Beverly at the top of the key, but Rudy’s on his horse, tracking the ball as it swings around the arc before recovering to get a hand up as Beverly lets the shot go. It isn’t a great contest, but Beverly’s not a great shooter, either. The ball catches front rim and LaMarcus comes down with the rebound.

Again, this isn’t anything unique or phenomenal as NBA basketball goes, but it’s a dramatic sign of improvement for this team. If they can communicate consistently, help early and recover with pace, they could easily turn themselves into an above average defensive squad. Last year’s turnaround came in similar fashion and was driven in large part by the same group of players.

Of course, their ability to match last season’s incredible December will be inextricably tied to how much they are able to trust the system. For much of the year, one of the key aspects of how the Spurs’ defend has been letting them down. The entire system is built on keeping opponents away from the rim and forcing them to shoot a low percentage when they get there. They’ve done a good job at the first part, but languished near the bottom of the league in opponent FG% within 4 feet of the basket.

Over the last week, though, and especially against the Clippers, the Spurs’ rim protection has come to life. LaMarcus Aldridge is now 6th in the league in blocks with 36, has a pair of 4 block games and a pair of 5 block games already this season, after managing just 1 of each last year. Jakob Poeltl has been even more impressive over the most recent stretch of games, putting up 15 blocks in the team’s last 6 contests to give him 23 on the season.

Blocks in and of themselves aren’t necessarily indicative of good interior defense, but in this case, they appear to be related to how often the Spurs are able to correctly funnel the play to a big without leaving a gaping hole elsewhere on the floor.

It’s not just better play from the two bigs, though that’s certainly part of it. Better communication means few fewer missed switches and open cuts to the rim each game and that means opponents have to deal with one of the team’s bigs just about any time they try to get to the basket, putting LaMarcus and Jakob in position to impact the play more often. That will surely mean more highlights at the very least, but it should also lead to a stingier defense, one that might even win the team a game every now and then.