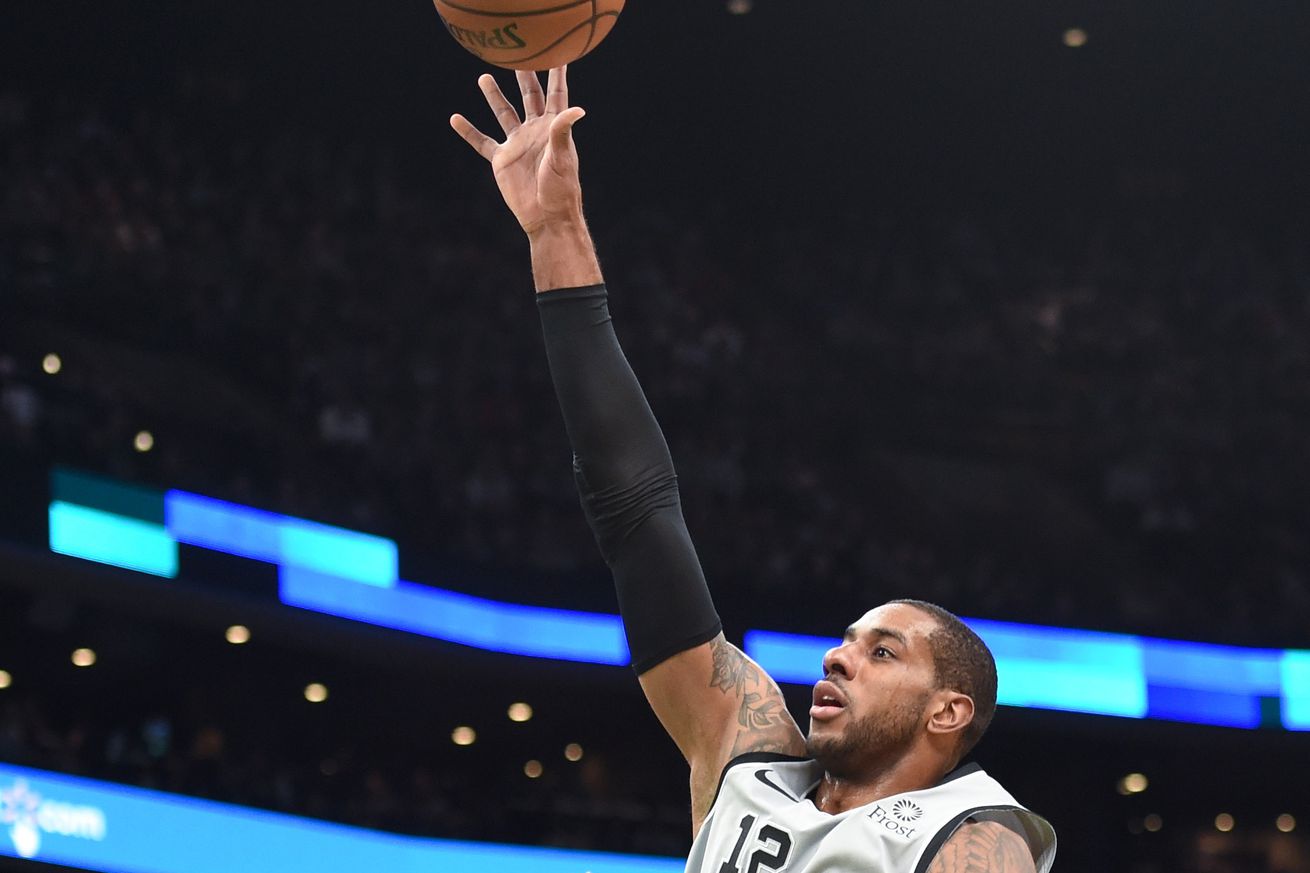 The Spurs took care of business on Sunday night in Boston against a depleted Celtics’ squad. After dropping two in a row, and with their adversary missing three key players, the game felt like a must win.

LaMarcus Aldridge appeared to recognize the need to assert control right from the start. He played all but 6 seconds of the 1st quarter and put up 19 points on 9/15 shooting. It was an auspicious start to what would end up being the 2nd highest scoring game of his career. But there was little about his actual performance that really stood out.

He was dominant in the post, exploiting the absence of Al Horford to the tune of 17 points on 11 shots out of post ups with 2 assists against only 1 turnover. He didn’t miss a single shot at the rim, per PBPstats, and he knocked down his only three, but mostly, he picked Boston apart in the mid-range, hitting 14 of his 25 shots between 4 feet and the three-point line.

The Spurs ran a lot of simple actions for him, cross screens and the like, to get him the ball on the block, and he hustled down the floor for easy opportunities and early seals as usual. It was a quintessential LaMarcus. One more bucket would have made it maybe the most workman-like 50 points in league history. As it was, LaMarcus put up about as quiet a 48 imaginable.

The highlight, really, was how simply and easily the Spurs ran through their actions, taking what the Celtics’ defense gave, with LaMarcus leading the way. As Boston changed its approach, the Spurs adapted in stride, something that was easily visible on a couple of the Spurs’ more recognizable plays.

Midway through the 1st quarter, they turned to the double drag on consecutive possessions.

The first time, Jakob Poeltl set the lead screen and rolled to the basket while LaMarcus set the trail screen and popped to the three point line. The Celtics switch the 2nd screen, leaving Kyrie Irving on LaMarcus and Guerschon Yabusele on Derrick White. Both teams immediately recognize the mismatch.

Just as LaMarcus is sealing Irving at the free throw line, Marcus Smart runs in from the weak side to save him. From the Celtics’ perspective, this is a much better match up, but on this night, it was irrelevant. LaMarcus turns and easily shoots over the top of Smart.

The Spurs switched it up the next time down, with LaMarcus setting the lead screen before rolling to the basket. Bryn Forbes sets a back screen on Yabusele to give LaMarcus a free run at the rim, but Gordon Hayward sags just enough to force Derrick to hold on to the ball.

Marcus Morris switches onto LaMarcus as he sets up in the post, fighting to force him farther away from the basket. Once again, it mattered not at all. LaMarcus calmly backs him down before turning over his right shoulder for a fade away that hits nothing but net.

Having missed the opportunity for a lob that time, the Spurs gave it another go in the 2nd.

It’s the exact same play (and you’ve seen it before), but unlike Hayward, Jaylen Brown doesn’t do anything to deter the lob. Morris is actually in good position to contest, but doesn’t realize what’s happening until it’s too late. Even if he had, though, Derrick White’s pass is right on target, and Morris would’ve had a very difficult time contesting without fouling.

(Editor’s Note: Bonus points awarded to Bryn Forbes for nearly snapping himself in half setting a backscreen on Baynes. While painful looking, it was effective enough to prevent the Aussie from returning to LMA and stopping the oop. -jrw)

LaMarcus employed the same opportunistic approach with his post ups. After putting buckets on every Celtics’ big from the left block, LaMarcus began drawing aggressive double teams early in the 3rd quarter.

Baynes moves to double on the catch, but the weak side help is, to put it mildly, non-existent. LaMarcus turns and zips the easy pass right over the top of the two Celtics’ defenders for the easy layup.

On his next post up, the Celtics brought their help from a more appropriate place, with Brown leaving DeMar alone in the corner. There’s still a moment of confusion, and were LaMarcus in a hurry, he could have fired a bullet to Jakob when Morris was inching over towards him, or hit DeMar in the corner.

But LaMarcus lets it play out a little and tosses the ball to Patty Mills on the right wing instead. Patty spins and flings it to DeMar in the corner, who then attacks Morris’ close out along the baseline. When Brown drops to cut off penetration, DeMar appears to be trapped. But the Spurs’ All-Star big man is on the opposite side dropping to create a passing lane.

DeMar finds him just inside the 3 point line and LaMarcus drains the long 2. This isn’t a great shot, nor the best outcome possible on this play, but when LaMarcus shooting open catch and shoot jumpers is your fall back plan, you’re in pretty good shape.

In the 4th, the Celtics stopped doubling on the catch, and went to a more traditional defensive approach, showing bodies and waiting for LaMarcus to make a move before committing.

Once LaMarcus puts the ball on the floor, Brown begins inching into the paint, and Derrick creeps in right behind him. When Brown make his move, LaMarcus drives middle and Derrick pops free under the rim. Morris drops to help, leaving Davis Bertans all alone at the arc.

For some reason, Davis lifts way farther than he needs to, putting himself closer to Smart than he ought to. It doesn’t matter, though, because Davis is 6’10” with a hair trigger, and he drills the three.

The Celtics’ weren’t at full strength, so there’s no reason to make this game out to be anything other than another road win. Still, as the Spurs make their push for the playoffs, every win matters, and winning the games they’re supposed to is the single most important thing they can do to get in the best position possible. The Spurs will likely be favored in all but 1 of their 8 remaining games, and if their offense keeps humming like this, they’ll have a good shot at a win in every one of them.