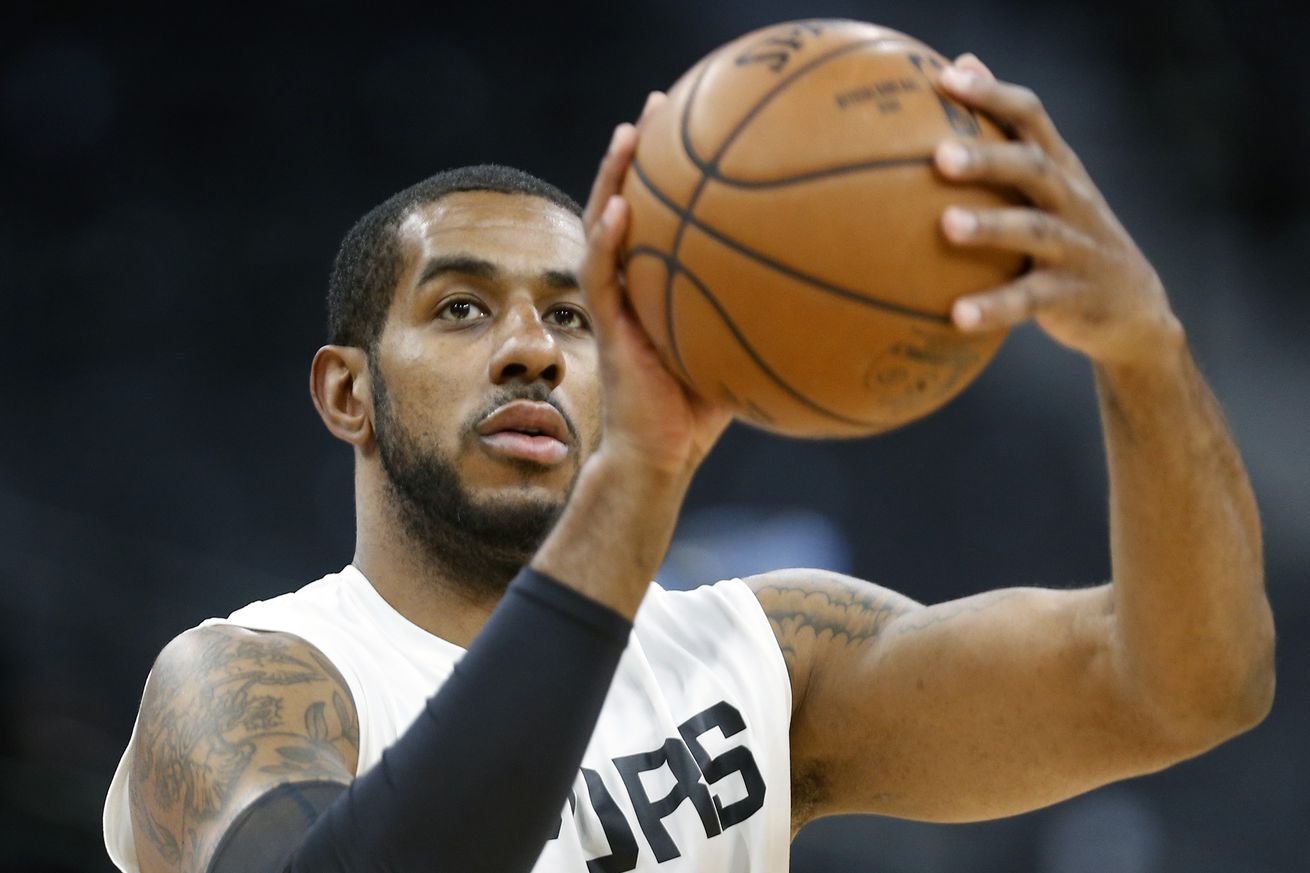 A small step back for LMA is a giant leap for the Spurs’ offense.

Something interesting happened on the Spurs’ 2nd play of the game in their victory over the Bucks on Sunday evening. They looked to be setting up for a DeMar DeRozan post up on the left block, but Eric Bledsoe denied the swing pass to the weak side wing, forcing the Spurs to transition into the 2nd part of the play.

Once Bryn Forbes realizes the pass isn’t there, he curls around LaMarcus Aldridge and clears out to the right corner. DeMar lifts up to the right wing and Jakob Poeltl moves over to the left side of the lane. At the same time, Derrick White heads back up top to run a pick and pop with LaMarcus.

Derrick, who’s become an expert at keeping defenders on his back, drags Malcolm Brogdon deep into the paint before kicking it back out to LaMarcus at the top of the key. LaMarcus, however, isn’t in his typical spot. Rather than float in a step like usual, he’s actually intentionally stepped out beyond the arc.

The Bucks’ don’t appear too concerned with giving him this look, either. There’s no rotation, forcing Brook Lopez to run all the way out from the restricted area to contest. LaMarcus misses, so in this case, that worked out. Whether LaMarcus can start making teams pay for that approach will be critical to making the Spurs’ 2-big lineup a viable option more often.

That wasn’t the only time LaMarcus found himself with the ball at the three point line.

With Jakob in the pick and roll, LaMarcus takes up position in the right corner. As DeMar makes his way into the paint and Lopez starts to cheat in, LaMarcus lifts just as he’s supposed to, giving DeMar an easy kick out pass. If he were Davis Bertans, with a lightning quick release, he could’ve easily taken the shot. But LaMarcus prefers to load up his threes, taking quite a bit more time than he does on twos, so he attacks Lopez off the dribble.

The Bucks were able to play DeMar and Jakob straight up on the pick and roll, that is, defend it with just the players involved without bringing help, so LaMarcus is attacking a set defense with less than 6 seconds left on the shot clock. He rarely attacks from this position in the offense, but he’s still able to get into his turnaround, which isn’t a terrible look given the situation.

Still, he’d likely be better off to lift more aggressively, giving him an angle of attack he’s more comfortable with, or to practice attacking the catch, something both Patty Mills and Marco Belinelli are very adept at.

This play represents one of the more challenging aspects of playing both Jakob and LaMarcus at the same time. DeMar is phenomenal against mismatches in isolation, and the Spurs frequently have another guard set a screen on the wing, just as they do here, to let DeMar go to work against a smaller defender.

He draws help almost every time, and this play is no exception. The problem is that with Jakob in the dunker spot on the weak side, there’s help readily available, and by putting LaMarcus in that corner, the player that then helps down on Jakob is likely the other team’s best interior defender.

Once again, the Bucks don’t treat LaMarcus at the three point line as much of a threat, with no rotation and not even a close out this time. Of course, this play also represents a defensive mistake by the Bucks. Both Lopez and Giannis Antetokuonmpo collapse on DeMar, which is why LaMarcus is so open.

Whether this was just part of the game plan against the Bucks is hard to tell. On one hand, LaMarcus averaged 0.6 three point attempts per 100 possessions before the All-Star break, and he’s up to 1.2 per 100 possessions since. On the other, that’s still just 7 total threes over 8 games.

That step back, though, makes it seem like this is a point of emphasis for him. He didn’t just end up at the three point line and take the shot that was available, he sought it out. If he can start hitting that shot again regularly, it’ll open up more minutes for Jakob, raising the team’s ceiling and adding yet another weapon to the arsenal of one of the most potent offenses in the league.