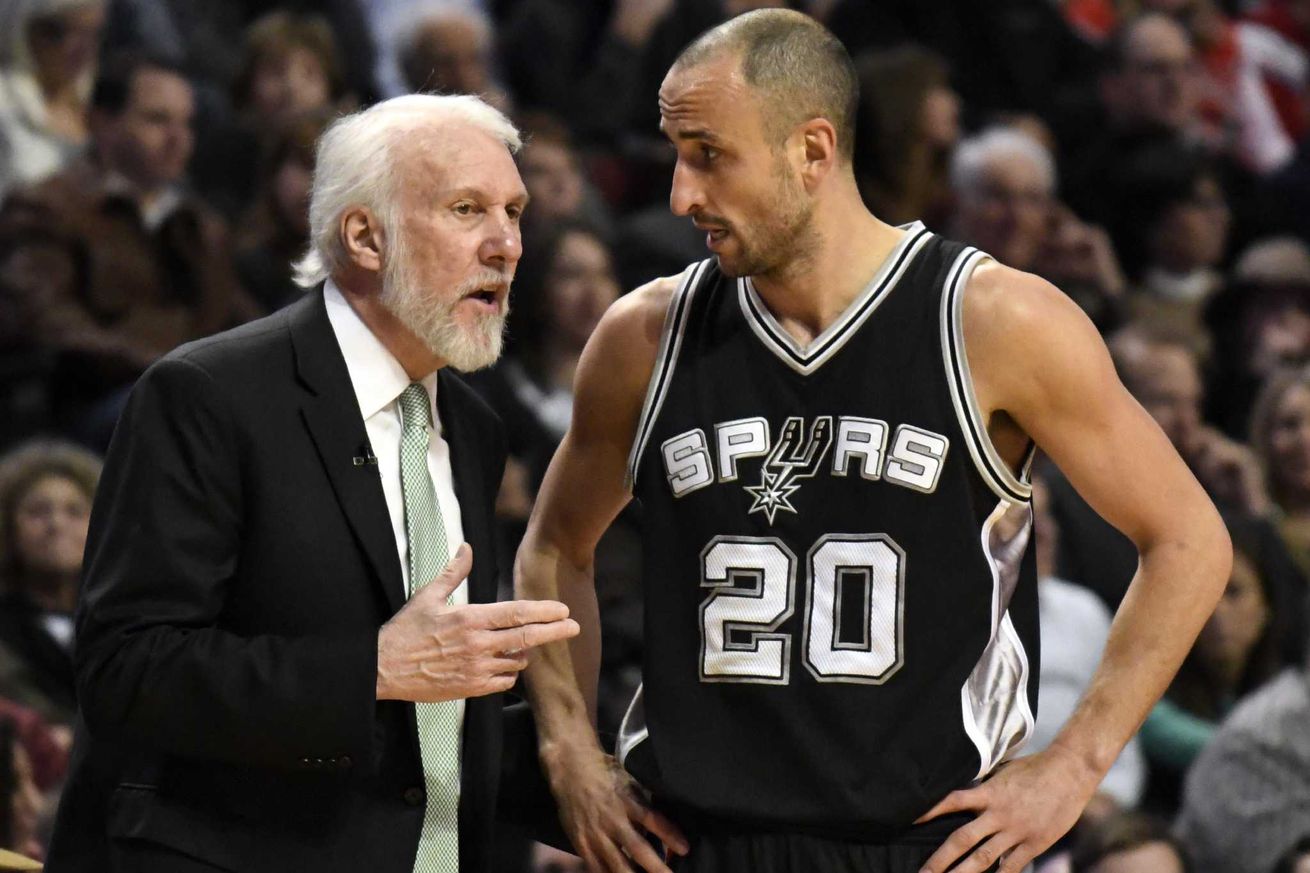 A history of second-guessing, and learning from, Gregg Popovich’s decision-making.

I must confess, I have never experienced a great deal of hardship when it comes to rooting for the San Antonio Spurs. I was born just three days after the end of their last (non-injury-related) losing season, and my first year of life coincided with the rookie debut of a certain David Maurice Robinson. And while 1998 wasn’t terribly long ago, I certainly don’t remember that season at all. Truth be told, I barely remember the championship year of ’99. It was the championship team of ’03, and Tim Duncan’s convincing impression of a real-life force of nature that won my heart as a sports fan. And since that fateful postseason it’s been hard to complain about how things have played out, but that doesn’t mean that there haven’t been moments of heartbreak, or confusion.

Ginobili’s retirement is one of them.

Saying goodbye to Manu, I’m reminded of all the things that I loved about that 2003 team: Timmy’s remarkable poise, and seemingly effortless ability to steer clutch moments, Tony’s wide-eyed gaze and frenetic water-bug motion, a certain Euro-Striding rookie galloping about with the wild gait of a newborn colt, Bruce Bowen crocodile wrestling the opposition and lurking in the corners, Steve Kerr looking like the least graceful athlete in all of creation, until the very moment he hoisted a shot. These are all memories now, albeit wonderful ones.

My heart dove right into my stomach when I saw the news of Manu’s (ahem) ‘conscious uncoupling.’ Suddenly a whole new wave of panic came tumbling down. He couldn’t have waited one more year? What are we supposed to do now? Why couldn’t he do this before they let Tony leave? Who in the hell is supposed to guide this team of newbies and youngsters into this brave new era of Spurs basketball?

That last question is a stupid one of course, but it’s not the first time I’ve had that kind of rash reaction to San Antonio personnel moves. It may surprise you to learn that back in the ’02-’03 season, my favorite Spur wasn’t Timmy, or Tony, or even Manu. (That would come later, during the 2005 Finals) It was a crafty combo-forward by the name of Malik Rose.

Malik was everything I aspired to be as a basketball player, despite my being a five-foot-nothing middle school point guard, and I felt our games mirrored each other’s. We were both alert and willing passers, active (though not extraordinary) rebounders for our size, and smart (yet undersized) defenders. We were also virtually guaranteed money shooting from just inside the arc, and just outside the paint; tailor-made to be role-players in virtually any era of the NBA.

Alas, as expected by those who better understood the family cycle of genetics, my height never caught up with my lofty ambitions. And here I sit (all 5’10” of me), writing articles about the team that I so badly wanted to play for. Which admittedly is still pretty great,

All kidding aside, there was something about Malik Rose that was hard not to love. He was tough, hard-working, strategically shrewd, and there was an irrepressible air of quirky optimism that emanated from him. I’d never seen a crowd cheer so much for a backup taking the court, and already spending much of my time coming off of the bench, I wanted that too. And so, for two-and-a-half seasons there was no Spurs player I cheered for louder than Malik Rose.

But then, halfway through the 2005 season, he was gone, and I was devastated. I didn’t even find out until a day later (I was last in line for the sports page, and we still just had dial-up internet) and disappointment soon turned to rage. All I wanted to do was seize Gregg Popovich by the throat and scream “WE. ALREADY. HAVE. TIM. DUNCAN. WE. DON’T. NEED. ANOTHER. CENTER.” whilst squeezing his windpipe like a Burmese python.

I was wrong, naturally, but apart from homicidal teenage rage and the cardinal sin of referring to Timmy as a center, it wasn’t a totally unwarranted reaction to the news. Rose was a solid contributor, and Nazr Mohammed had already proven to be little more than a steady yet unspectacular big man. But as per usual, PATFO were miles ahead of all of us. Having anticipated that most of the teams the Spurs were likely to play in the postseason either employed two more traditionally-sized bigs (Dallas and Houston) or played a smaller lineup than most (Phoenix and Seattle), Pop decided to invest in a slight increase in rebounding and rim protection, and the move paid off like gangbusters.

I don’t have to tell you what happened next, I’m sure you all remember the ’05 postseason. But what you might not remember is that Nazr Mohammed was second on the team in rebounds and blocks throughout the playoffs, and that he matched Rasheed Wallace in rebounding average in the Finals, while serving as just enough of an offensive threat to distract ‘Sheed and Ben Wallace from constantly ganging up on Tim.

This information and subsequent championship however, did not keep me from second guessing the Spurs brass yet again in 2011, when they traded George Hill for a pick that I largely considered to be the equivalent of magic beans. Nor did it stop me from complaining when they signed a remarkably rotund (and arguably position-less) Frenchman later that season, who had just been waived by the Charlotte Bobcats of all teams!

And then there was the waiving of Stephen Jackson just before the ’13 postseason. Not since the Rose trade had I been so incredibly incensed by a personnel move. Not only was Jackson one of my favorite players from that much-beloved ’03 team, but he also hailed from an area of Texas that I had grown up in. And to make matter worse, ‘Action’ Jackson had been the hottest shooting Spur in the previous postseason (to the tune of a .535 FG%, .605 3Pt%, and .933 FT% in 14 games), and had continued to absolutely rain (.657 FG%, .680 3Pt%, and .833 FT%) against a team that the Spurs were all but guaranteed to face yet again, The Oklahoma City Thunder!

Visions of Pop-strangling danced through my head once again, the previous phrase replaced by: “YOU. DON’T. GIVE. AWAY. VALUABLE. PLAYOFF. CONTRIBUTORS. FOR. NOTHING.” So naturally the Spurs all but swept their way through the 2013 postseason, losing only two games to the upstart Golden State Warriors (that’s called foreshadowing, folks) in route to the NBA Finals. And though we very memorably lost that championship series, in the process of playing it out the length of seven games, Boris Diaw also proved his worth as the key to unlocking the potency of a variety of Spurs lineups (as well as the deserving recipient of Jackson’s minutes), and the result of the George Hill trade began to reveal the heights of his full potential as well.

As it turns out, I couldn’t have been more wrong. Malik Rose was just too small to be what the Spurs needed in ’05. Kawhi Leonard proved to be a steal. (This offseason aside, I’d still trade Hill for a title any day.) Boris Diaw was more than just an overweight has-been. And Stephen Jackson after (and perhaps during) the ’12 postseason became a locker room cancer preventing a Spurs team full of potential from returning to the promised land.

Time and time again I’ve had the wrong idea when it came to personnel moves and team strategies. And at the end of a tumultuous offseason, full of highly impactful decisions, that’s an important thing to remember. Trading for Derozan isn’t something I would have done. (I’ve since come around on that.) And under no circumstances would I have let Danny Green go. But I don’t have the inside track, and I don’t know what these Spurs may need as well as Pop does. For nearly fifteen years I’ve second guessed him, and I’ve been wrong in almost every instance. (I was right about the Richard Jefferson trade, though.)

I think it mostly goes without saying that the 2017-2018 season was a rough one for Spurs fans. For the first time in twenty years our faith in the players, the coaches, and the organization itself was shaken. And while the saga-that-must-not-be-named didn’t resolve itself in the ideal way that we’d hoped it would, after the initial media frenzy had passed, the storm-clouds appear to be clearing at last. And then came Manu’s announcement.

In a world where so many things feel out of our control, sports are often a safe-haven for those who want to believe that sacrifice, hard work, and determination will win out in the end. This is why we watch them in the first place, and especially why we watch the San Antonio Spurs. For an NBA news cycle full of flash and focused on dynamic individual efforts, the Spurs are a fly in the ointment; a nagging reminder that the whole can still matter more than the sum of its parts, and that a sheer abundance of natural talent can, has been, and will again be outworked. This is a hope that we entertain and cling to when the outside world is so often busy indicating the opposite, and it’s why we’ll miss Manu Ginobili so very badly.

What other Spurs player stood as such a grand example of overcoming stark odds and physical limitations only to become one of the most antithetical and idiosyncratic basketball stars in NBA history? Timmy and Tony were both 1st round picks, as was Kawhi Leonard. Manu was always a long shot, a living emblematic beacon who inspired the belief that ‘The Spurs Way’ applied to things even outside the realm of basketball. His absence throws into sharp relief not only the current reality of the NBA, but also that of the world we live in, and that makes it easy to despair the loss.

But just as easily we forget the man behind it all; the man I’ve spent so many years chewing out in the privacy of my own space. Just as so many Spurs teams counted on the efforts of Tim, Tony, and Manu, they also depended on the tactics and the decision making of Gregg Popovich. On championship teams, the talent — and the ability to select, direct and hone that talent — are innately intertwined. And through PATFO’s calm and careful stewardship, Manu is leaving a team that is arguably just as loaded with young talent and veteran leadership as the team he joined in 2002.

If anything, Manu’s willingness to finally hang it up says more to me about the state of this team than any other single thing. He was never the sort to leave us in a time of need, and Pop has never been the sort to put him in that kind of position in the first place.

So after a tumultuous and bittersweet year, I for one am excited to see what this season will bring. It’s time for new stories, variations on old themes, and for some lingering motifs to finally run their course. The Big Three have at last reached the end of their tale, but Gregg Popovich is still penning his. While I don’t know what I’ll do when he finally hangs his scowl up for the last time, after a decade and half, in Pop I trust.