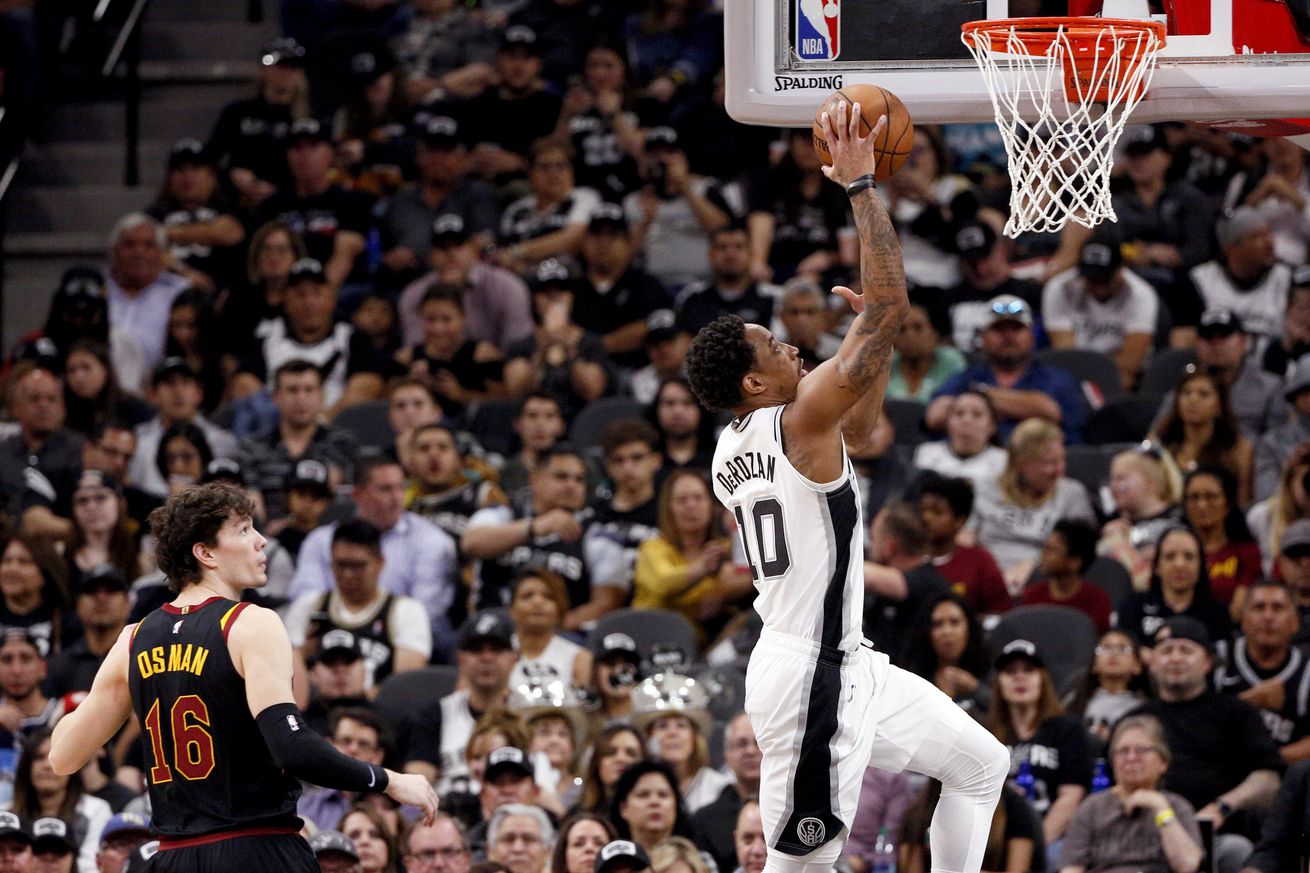 With a little help from his friends, of course.

It may have been Manu’s night, but DeMar DeRozan played the hero in the Spurs’ 116-110 victory over the Cavaliers on Thursday. After a slow first half, the Spurs opened up the floor by starting Rudy Gay instead of Jakob Poeltl to start the 3rd quarter. The move left the Cavs with no answer for DeMar, who dominated the offense for 5 straight minutes as the Spurs scored 21 points on 11 possessions and turned an 11 point deficit into a 3 point lead.

DeMar created every single one of those points, hitting all 6 of his shots and going 3 of 3 from the free throw line with 1 assist and a pair of hockey assists.

The Cavaliers, like a lot of teams in the league, don’t have anyone who can guard DeMar one on one. Those teams have to choose between watching DeMar pick them apart from 4 feet and in or sending help and watching him hit open shooters and cutters all day. For most of the 3rd quarter, the Cavs chose the former, and it didn’t work out very well for them.

Even when they were able to cut off DeMar’s penetration, he created enough rotation to open up seams for others to attack. Bryn Forbes did a particularly good job of taking advantage of the opportunity during this period, twice feeding LaMarcus Aldridge for layups by getting deep in the paint before lofting off-balance passes over the top of the defense.

This feels like development for Bryn. These passes require patience, vision, and a pretty advanced level of touch and feel to pull off. Teams seem content to run him off the line and let him do what he can off the dribble. He’s already shown significant improvement at finishing around the rim, particularly on his floaters and through contact. Adding these types of late passes, especially on the interior, is another step forward.

For LaMarcus, this is what he does when his shots aren’t falling. He screens, he battles, and he’s constantly getting good position trying to make something happen.

Of course, all of that only matters because the Spurs were able to close out the game, and once again, they turned to DeMar to make it happen.

Using a play they ought to run more, and perhaps will in the playoffs, the Spurs space the floor and give the ball to DeMar out close to half court. In this case, DeMar starts on the right side, and LaMarcus runs up from the paint to set a screen to DeMar’s left, back towards the middle of the floor.

Just as LaMarcus is getting set, Larry Nance Jr. shoves him in the back, forcing him right into Cedi Osman.

LaMarcus is able to hold himself up just enough to not get called for a foul, but he’s out of position for the screen he intended to set. But that means Nance is out of position now, too. With LaMarcus on Osman’s back, Nance needs to be able to corral DeMar no matter what direction he goes, but he’s far too high.

It’s hard to tell whether that’s Nance’s fault or Osman’s. The Cavs could have intended to force DeMar towards the screen, in which case Nance’s positioning makes sense. But in that case, pushing LaMarcus in the back unintentionally broke the coverage.

Either way, once DeMar blows past those two, the Cavs’ defense is in deep trouble. Both Kevin Love and Collin Sexton drop into the paint to stop DeMar’s drive leaving open Spurs all over the floor. As DeMar gathers, he’s got open passing lanes to Rudy in the strong side corner, Bryn on the left wing, and Patty Mills in the left corner.

With his momentum carrying him to the left, and just one defender remaining on that side of the floor, DeMar focuses in on those two options.

As he rises into the air, he hits poor Brandon Knight with a vicious ball fake, even shifting his head and eyes to sell the pass, before dropping the ball perfectly into Patty’s shooting pocket. On this night, there was simply no way the Spurs’ longest tenured player was missing that shot.

There’s much to be concerned about with this Spurs’ performance. They have no reason to find themselves in such a close game at home with a team they are clearly better than. But, as has already been covered, it was a weird night, and a win is a win.