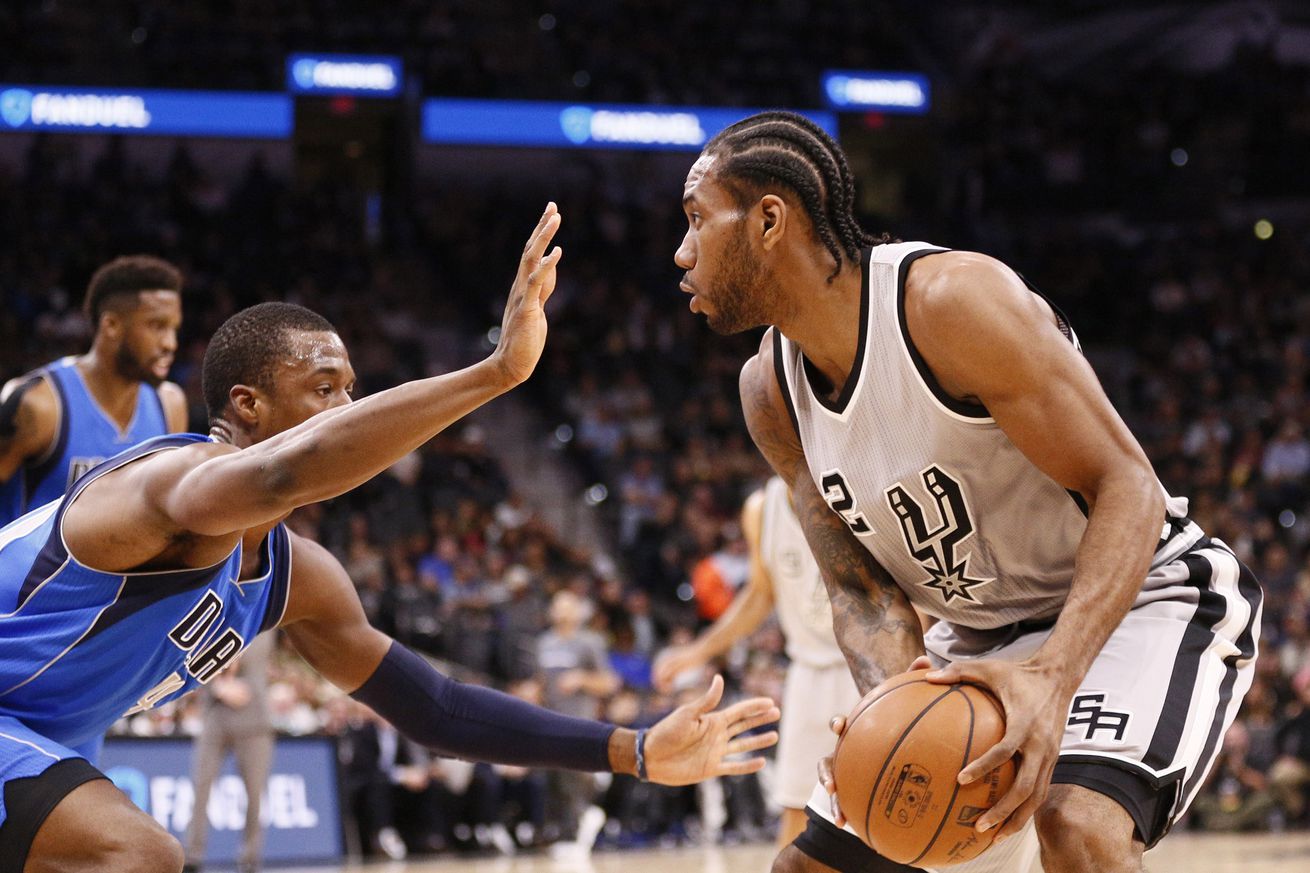 In San Antonio’s last four defeats, three things have been happening down the stretch.

The way the Spurs lost their last two games, to the Pelicans and the Mavericks, probably felt familiar. It’s not hard to draw parallels to the two defeats at the hands of the Bucks and Suns from earlier this month: San Antonio’s offense slowed down in the second half on each occasion, while opponents had little trouble scoring.

The defensive issues are concerning, but largely have to do with poor communication on defense, as Gregg Popovich and Manu Ginobili mentioned after the Dallas game. It’s to be expected with all the new faces and changing rotations and will likely be solved with time. What happened on the other end, however, is much more interesting.

The offense was purring in the first half of all four games, but struggled mightily in the fourth quarter. That’s not a coincidence. All four losses had three traits in common.

1 – In the fourth quarter, the Spurs play slow even by their standards

Pace doesn’t typically say much about an offense. San Antonio tries to get to its sets early and, as we’ve pointed out before, the stat is not typically reflective of ball movement. The Spurs playing at a slow pace is nothing to worry about. But what we are seeing late in losses is not slow. It’s glacial.

In the fourth quarter of their last four losses, the Spurs have used on average 87 possessions per 48 minutes. That’s nine possessions lower than their average pace and would rank dead last in the league with a bullet — an infinitely slow molasses bullet rolling uphill against a headwind.

The same doesn’t happen in wins, in which the Spurs play at an average pace of 95 possessions per 48 minutes in fourth quarters, only slightly slower than they do on average.

To say that the offense has been getting stuck in mud in the fourth quarter would be an understatement. San Antonio has enough firepower to overwhelm most opponents who try to match shot for shot but instead reduces its opportunities to score, leveling the playing field and paying for it with Ls against bad teams.

2- The Spurs are not scoring at the rim

Now, a team could survive playing that slow by being extremely efficient, but the Spurs haven’t been. Their sluggishness is at least partially responsible for that, as well.

San Antonio hasn’t been able to get dribble penetration in the fourth quarter. Here’s the distribution chart from the first three periods of the past four losses, compared to the forth quarter. Focus on the paint.

Since the Spurs rarely push the ball up the floor, they have to face a set defense almost all the time. Shots at the rim decrease significantly, as the defense has time to organize and communicate. Opponents simply pack the paint, often leaving open the one or two Spurs who can’t really hurt them from outside.

The Spurs’ famous execution suffers in a half-court war of attrition. The easy looks they get from confusing opponents with their ball movement early in the clock are gone. Every weakness is exposed, like it would in a playoff game. In the past when they played like that they had an airtight defense. Now they don’t, so they need to score.

Unfortunately, instead of playing with both more urgency and more patience to get them through the rough patches ….

When their normal execution fails, San Antonio resorts to one-on-one play in desperation, which only hurts the offense more.

In the fourth quarter of the losses, the Spurs went ISO a lot. In total they had 35 isolation possessions in those games and 13 of those came in fourth quarters. That means 37 percent of all ISOs came in the final period, instead of the 25 percent that would have been expected had San Antonio used that setting equally over four frames.

Considering the Spurs rank 21st in the league in points per possession on isolation (including passes), that’s not good. Kawhi Leonard, who gets the bulk of those, averages under a point per possession. He can score on jumpers but it’s almost impossible for him to get to the rim going one-on-one when the opponents knows what’s coming. The kick outs don’t yield great scoring opportunities, either.

San Antonio doesn’t abuse isolation play as much as other teams, even in the fourth quarter. But the Spurs do seem to go to it more than they should at times, which contributes to a slower, more predictable and easier to stop late-game offense.

Don’t panic! There’s plenty of time to correct the issues

Now, the Spurs have generated good looks in the fourth quarter of those losses. They’ve just done it less often than in other sections of the game. Part of that has to do with the opponents’ taking advantage of the ultra slow pace to set up on defense and part of that has had to do with the Spurs simply settling for jumpers and going one-on-one more often than they do earlier in games.

The good news is that it all seems fixable. Getting into sets quickly should be a priority even late on games and even when the Spurs are leading. Trading some ISOs for pick and rolls and post-ups for Leonard and Aldridge would be smart. Ideally the Spurs would put shooters around those two but if they don’t, the stars have to either take the shot themselves or kick it out early, in order to allow for a secondary action which could trigger a defensive breakdown.

Ultimately it might all come down to just making shots. If some of the good looks the Spurs generate go in, it would change everything. As the cliche says, it’s a make-or-miss league. The strategy of packing the paint doesn’t work at other points in the game against the Spurs and it wouldn’t in the fourth quarter if a few more three-pointers go in, no matter the pace. Still, San Antonio needs to play at its normal speed and execute instead of hoping for better luck.

It would be premature to say that fourth-quarter offense is a problem for the Spurs now. Not long ago, they were the clutchest team in the league. With some small tweaks and sharper execution, they could go back to dominating the end of games.