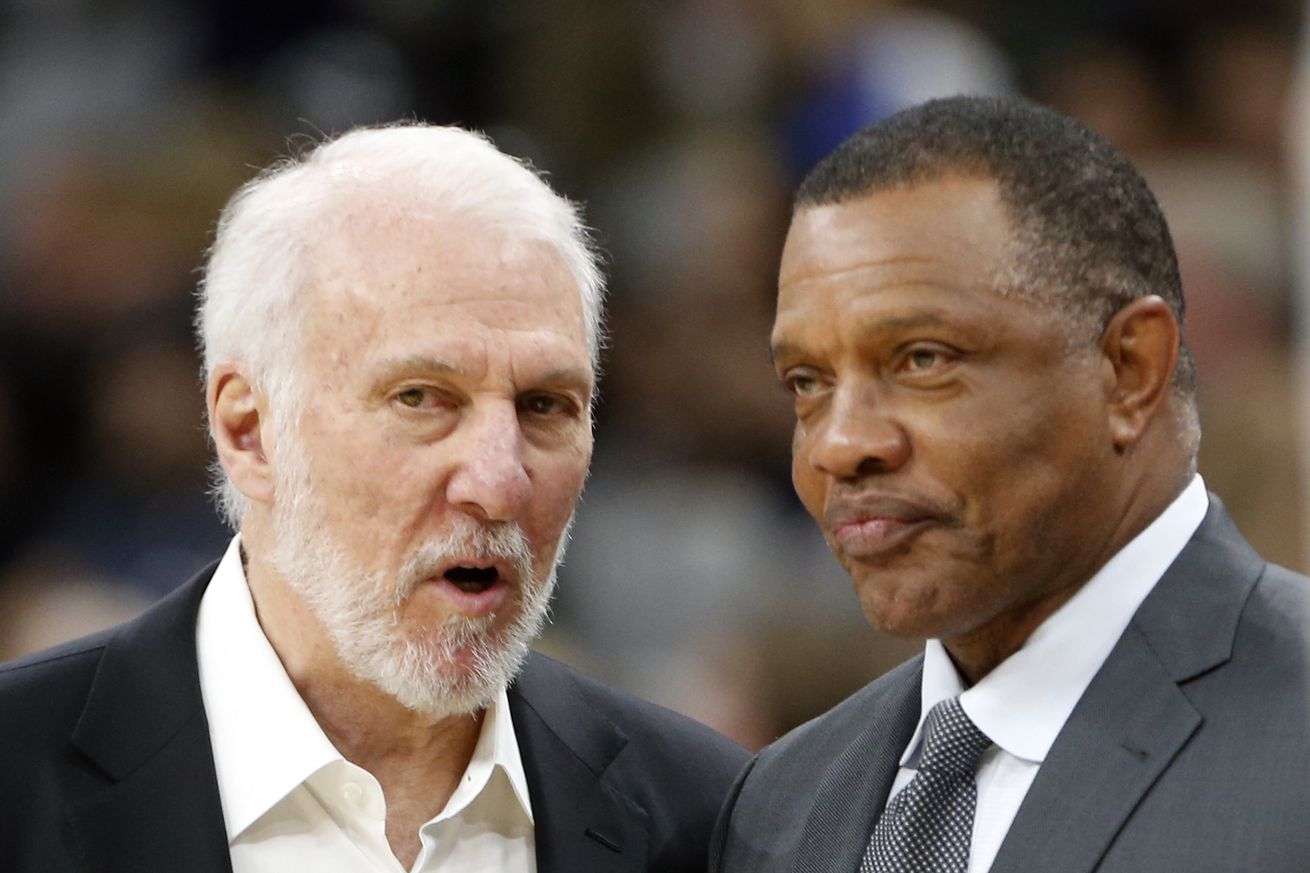 There’s something to be said for San Antonio’s starting power forward.

We are three games into the NBA season, and questions abound regarding line-up decisions, rotations, etc, because apparently everyone else knows better than the GOAT head coach who has been leading the Spurs organization longer than any other head coach has led one team.

So it’s time for me, Chatty Pop (the imaginary version of Gregg Popovich who is willing to have a long conversation to make my point) to answer the most burning question of the week: why is Trey Lyles starting? Below is the pretend media scrum and my answer to that question.

When looking at the box score, it’s hard to explain why Trey Lyles is getting any playing time, much less starting. Can you explain what you’re seeing from Lyles that makes you comfortable running him with your starters?

Is that a serious question? What box scores are you looking at? You are really asking me this, huh? Alright, you guys like these “analytical” stats, right? Let’s start with the things *I* see in the box score.

Let me see here, what is that stat you guys like? Plus/minus? Well, for starters, Trey’s +13 in his role as a starter. As a team, we are +14. If I understand this crazy creation correctly, that’s not bad. In fact, I’ll give you the benefit of the doubt and assume you know that his +13 in 22 minutes per game compared +1 in 26 minutes per game without him isn’t a bad thing.

Second, he’s averaging 8.7 rebounds per game. 11 + 7 + 8. Divided by 3. That’s how you calculate it. His 8.7 rebounds per game lead the team. I’m going to go out on another limb here and assume you know rebounding is an important part of the game. So and that helps my comfort level.

These two points — his plus minus and rebounding — speak to his overall effectiveness and his contribution to the team, respectively. So, THAT’S what I see in the box score. Where do you get your box scores, btw? In the Express News? I guess that would explain a few things…

It isn’t explicitly in the box score, but I think it is worth pointing out that he is also leading the team in rebound rate. Which, for your information, is rebounds per minute. So Trey is really busting his butt getting after it on the glass.

Now, let me talk about the other things I see. There is only one ball on the court. This is a very important concept in basketball that gets overlooked. As a starter, Trey is playing with LaMarcus, DeMar, and Dejounte. We run a lot of offense for LaMarcus and DeMar. And, obviously, Dejounte runs the point and pushes the ball in transition. Trey’s job and Bryn’s job is to run the floor and space the court. I expect zero dribbles from either of them, but especially Trey. And I’m certainly not going to call a play for him. His usage rate is the lowest on the team and, given that LaMarcus and DeMar have the highest usage, I’m okay with that.

And before you ask, there’s probably someone out here who thinks I should be playing Rudy with the starters, so I’ll address that too. Another important concept that’s often overlooked is the fact that NBA games are 48 minutes. Again, there is only one ball, but we do want that ball going into the basket for those 48 minutes. As the coach, I try to help the team make that happen. I do that by not putting five guys on the floor at the same time who can’t score.

How do you think a lineup of Trey, Patty, Marco, Jakob, and Derrick is going to score? Derrick is the only player comfortable taking his man off the dribble or of using a pick and roll to create. Carrying that responsibility every trip would be a tremendous burden on him. In addition, none of those five can be isolated and expect to produce points. There’s a reason Sean Elliott calls Rudy “The Point Shark.” Rudy will go get you buckets.

All this isn’t to say Trey’s play is perfect. His shot isn’t there and he is new to the system, so he is missing defensive rotations and not always in the correct spot on offense. But, those will come in time. Then, you might even see him closing games. I can’t wait for you guys to start asking me questions about that!