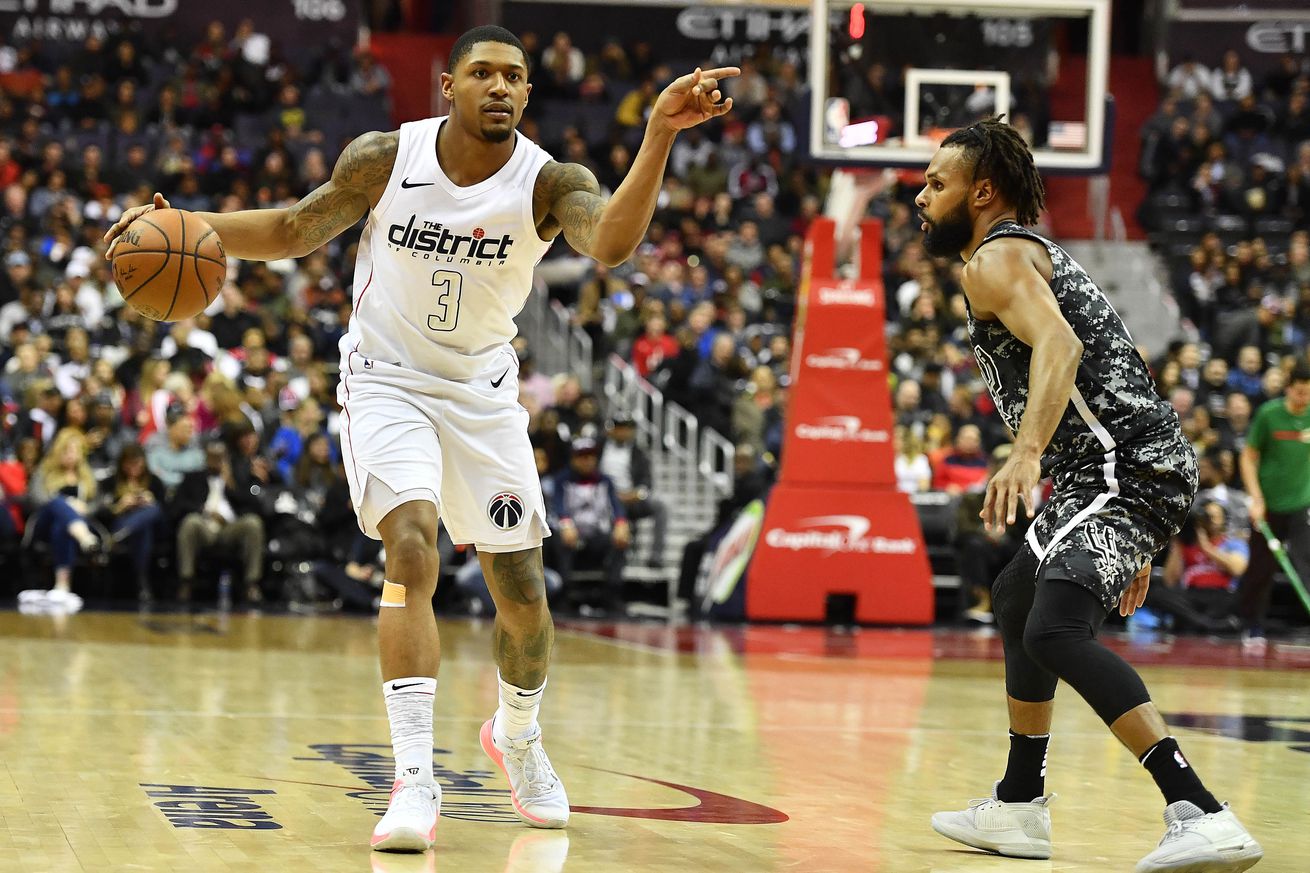 The Spurs kick off a 4-game home stand against the Washington Wizards.

The Spurs are back home after a quick 2-game road trip, and it can’t come at a better time. 3-4 in their last 7 games, with some pretty bad losses in there (looking at you, Philly Collapse!), this return home coincides with a 4-game home stand just before the Rodeo Road Trip kicks off. First up is a Wizards team that has been playing slightly better basketball (7-4, including a win Friday night against the Orlando Magic and a defensive rating of 105.6 in January, good enough for 4th) since it was confirmed that point guard John Wall would miss the remainder of the season to have surgery on his Achilles.

Beal, whose name has popped up in trade discussions because of the Wizards having a let-down season and because he has both youth and a much more friendly contract than backcourt mate Wall, has seen most of his per game stats go up in January, where he is averaging 28.2 points, 5.8 rebounds, and 6 assists per game on solid shooting (45/40/80).

Beal, unlike Wall, is a very capable shooter and with Wall out, he is getting his chance to shine. It will be important for the Spurs to limit his long-distance looks (he’s launching 8 a game in January while hitting an above average 40% of them, 7.2 attempts and 35.4% on the season). He also has shown a love for the pull-up jump shot, with 8 of his field goal attempts a game being that type of shot.

If I had to guess, top 100 player Derrick White will get the assignment.

DeMar DeRozan was fantastic shooting the ball against the 76ers on Wednesday. If he’s able to suit up tonight, it’d be great to see him get into that flow once again shooting the basketball. DeRozan wasn’t hesitant to take the jumper when teams went under the screens on the free throw line pick and rolls that he so often runs with LaMarcus Aldridge. A variety of drives to the hoop and some Dream Shaking all contributed to his 26 points Wednesday night:

DeMar DeRozan finished with a team-high 26 PTS and added 9 REB & 2 STL in the @Spurs road game versus the @sixers!#GoSpursGo pic.twitter.com/6yo17QzDu9

What he needs to cut down on is some of the turnover issues that have plagued his game recently (4 a game in January). He often gets caught trying to make a pass in the air, and that indecision will lead to lost possessions for a Spurs team that needs to play their very best every night to pile up wins in a stacked Western Conference.

Small steps on a big ladder

The Spurs have had plenty of opportunity to move up in the Western Conference standings. Sitting at 7th with a 28-22 record, they can’t afford to take any team lightly. While Washington hasn’t played lights out all season, they will still present a challenge to most teams on any given night. With 3 of the 4 teams on this home stand playing less than stellar basketball on the season, it will be important for the Spurs to pad their record a bit before heading out on what could be a grueling 8-game Rodeo Road Trip that is only broken up by the All Star break.

Hopefully, that means they get the party off right tonight with a W against Washington.

Remember, this game will be Military Appreciation Night. The Spurs and USAA are teaming up for “Operation Gratitude” which will look to send care packages to service members that have been deployed. You can bring items to the game to donate, a list of which can be found here.