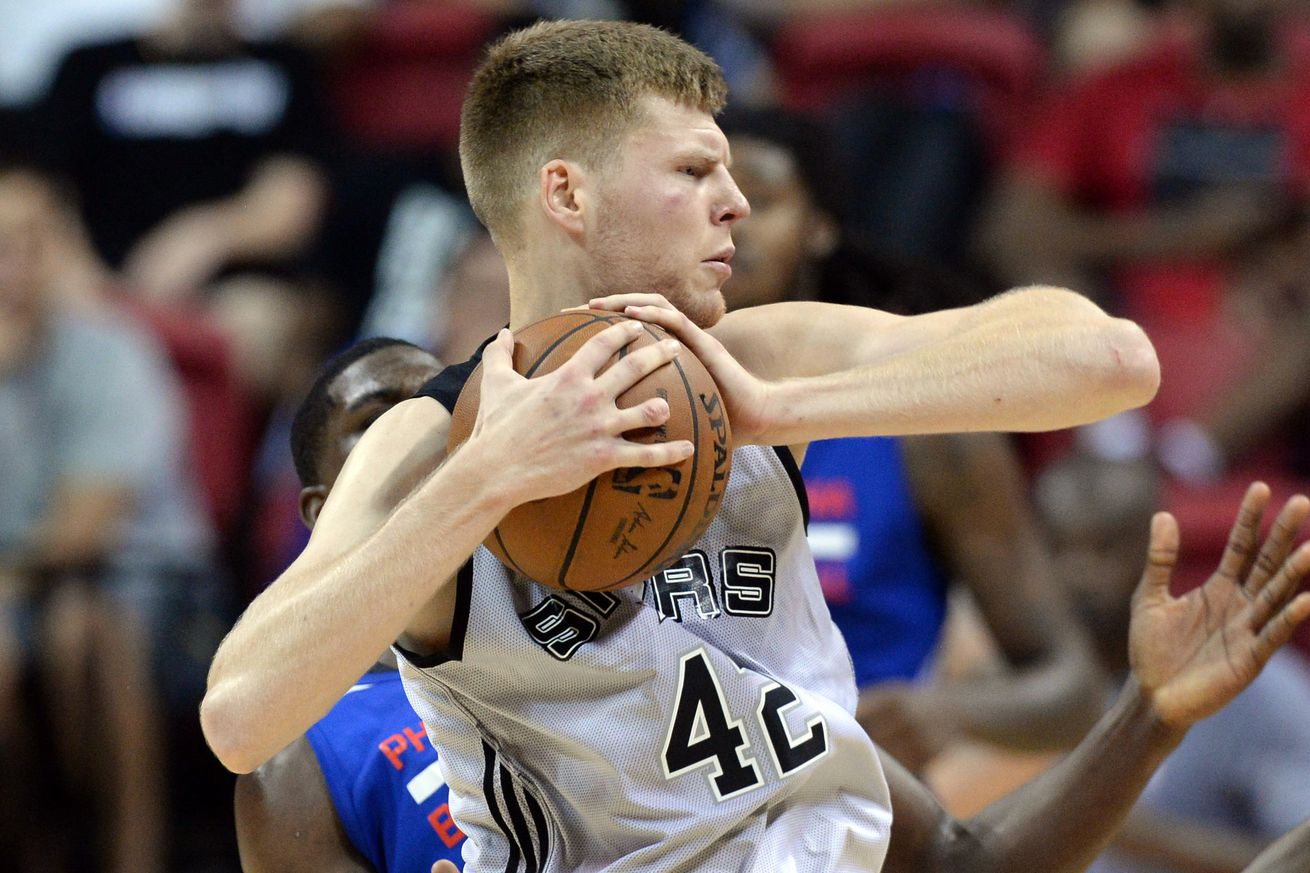 In their first matinee of the summer season, San Antonio faces the 1-1 Portland Trail Blazers and their two first round draft picks Caleb Swanigan and Zach Collins. The Spurs leveled their Vegas record to 1-1 as well after defeating the 76ers Sunday night by a score of 101 to 95. Bryn Forbes once again dominated the scoring with 35 points while Davis Bertans added 20. After this third game, all teams will be seeded into a tournament running through the Championship Game on July 17. Each team is guaranteed to play two games in the tournament.

The Kings drafted Zach Colllins, a one and done out of Gonzaga, with the 10th pick before trading him to Portland. Perhaps the Vegas native needs to change tables as he’s shot 4 for 20 in the first two games. However, the 7-foot center has performed well on the defensive side of the ball. Portland’s 26th pick, 6-9 power forward Caleb Swanigan out of Purdue, is off to a much better start averaging 14 points and 10 boards. Other notables include R.J. Hunter, a 2014 first round pick of Boston, and second-year player Jake Layman.

White sat out the Philly game for purposes of rest so should be ready to go against Portland. The Spurs’ 2017 first round pick and 29th overall will look to improve his shooting.

Expect Murray to play more than the 14 minutes he played against Philly. This will provide the Spurs’ first round pick in 2016 and 29th overall some time to improve on his shooting and cut down on turnovers.

Forbes leads the Vegas League in scoring with an average of 26.5 points per game after dropping 35 on Sunday night. The only thing that can keep him from scoring is not playing. And after playing 29 and 28 minutes over the weekend, does Forbes perhaps play less or even sit out against Portland? Regardless, his dexterous shooting can take over a game. One note, while he only had 1 turnover against Miami, he had 8 against Philly.

Jaron can impress on occasion with his jumping ability. Against Philly, he contributed 3 points on 1 for 2 shooting with 6 boards. Hopefully, he’ll find more opportunities to highlight his skills.

Whittington followed his 16 point, 4 rebound performance against Miami with a 13 point, 6 rebound showing against Philly on 5-of-7 shooting. Arguably Shayne has shown the greatest improvement since the first game in Utah.

Hanlan, a second-year guard out of Boston College, made some noise for the first time this summer with 7 points, 3 boards and 4 assists. Can he build on this performance, which included some strong defensive play as well?

Not too much may be gleaned from the fact that the Spurs and the Trail Blazers faced two common opponents this summer as Portland defeated Utah 72 to 63 and Utah beat San Antonio 87 to 74. Additionally, while the Spurs defeated Boston 81-70, Boston beat Portland 70 to 64. For the Spurs, they showed toughness by holding on to the lead late in the game against Philly. However, ball security at critical moments remains a challenge. Finally, the defensive presence of Zach Collins presents an enhanced challenge to San Antonio’s scorers.