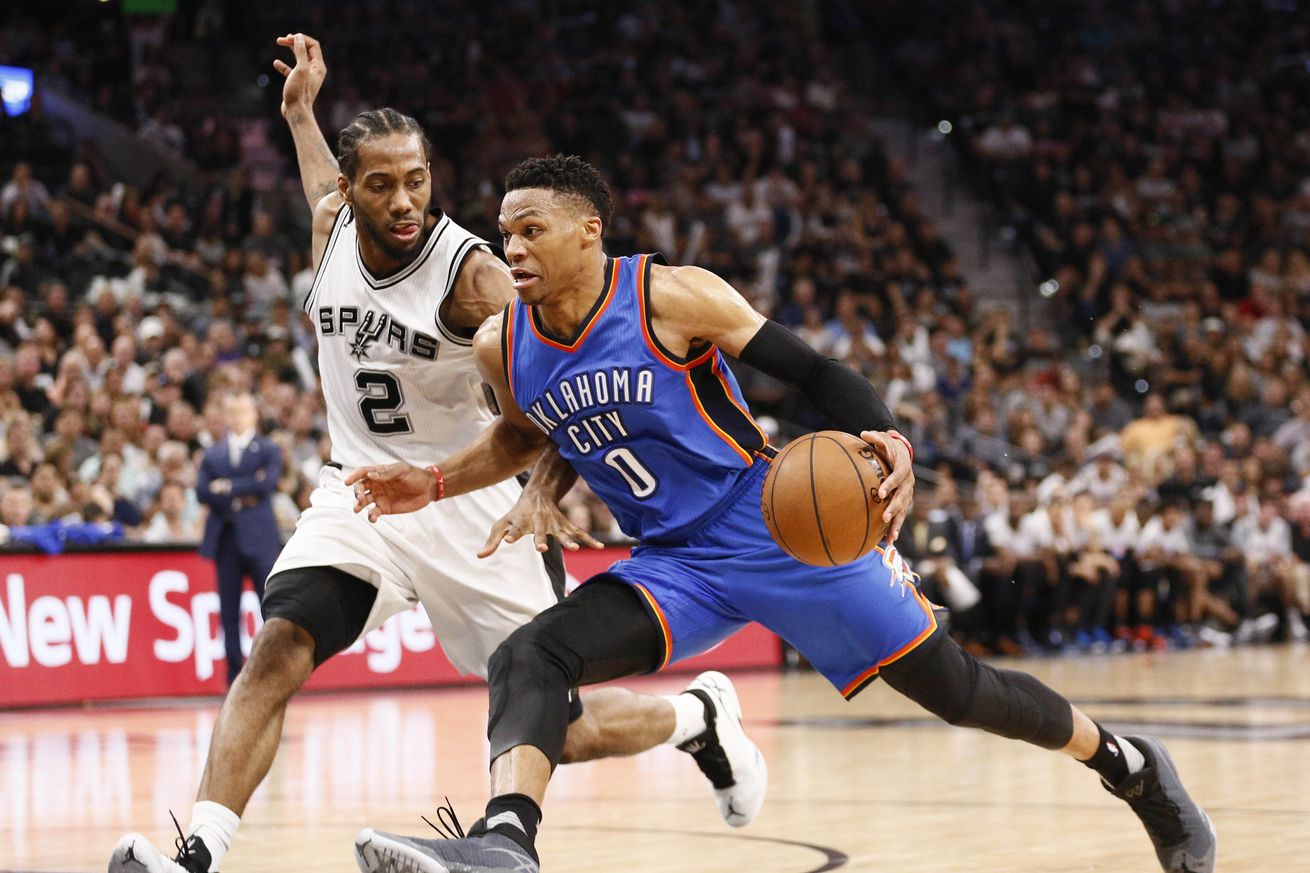 San Antonio battles the Thunder for the first time since Durant left for Golden State.

The Spurs are reeling — well, as much as a team on pace for 63 wins can be “reeling.”

San Antonio dropped its last two games to division foes (New Orleans, Dallas) by a combined 20 points. Neither team is in playoff contention, though the Pelicans sit just three games back of the Nuggets for the final playoff spot. This two-game skid ties the Spurs’ longest losing streak of the season.

Tuesday night the Spurs welcome the Oklahoma City Thunder to the AT&T Center for their second of four home games this week. It’s the first meeting between the teams since last year’s Western Conference semifinals, when Kevin Durant and Russell Westbrook combined for 65 points in the series-clinching victory. (That happened to be Tim Duncan’s last NBA game, too. I’m sad now.)

Things have changed quite a bit in the last eight months. Durant spurned the Thunder for the Golden State Warriors, which would be huge news if you emerged from a coma in the past week.

Durant’s departure means there is a gaping hole in Oklahoma City’s scoring hierarchy. When Serge Ibaka was traded to Orlando last offseason, that left Westbrook as one of the last holdovers from the 2012 Finals team.

This year’s iteration of the Thunder feature new players acclimating to the system in Victor Oladipo, Domatas Sabonis and Jerami Grant — all acquired in trades or the draft.

But let’s be real. The headliner is Westbrook, who is putting together one of the most memorable individual seasons in NBA history. He’s averaging 30.8 points (leads the league), 10.6 rebounds (first among guards) and 10.2 assists (third) this season, along with 24 triple-doubles (tops by a wide-margin). His Player Efficiency Rating (29.1) is the highest in the NBA and he’s assisting on 56.2 percent of his teammates baskets (also a league-best) when he’s on the floor this season.

Oklahoma City, despite losing a four-time scoring champion and its significant roster turnover, currently sits in the sixth spot in the conference because Westbrook is single-handedly setting the NBA world on fire each and every night.

Under Westbrook’s tutelage, the Thunder offense has hovered around league-average this season, while its defense has consistently been a top-10 unit. Without Durant, and the gravity that he attracts, Oklahoma City has remained in playoff contention by getting to the free throw line early and often, crashing the offensive glass and allowing Westbrook to be Westbrook. It’s a simple formula that works against most teams.

Enes Kanter’s extended absence (out two months with a broken forearm) means that formula will be a bit compromised. He’s a big part of the reason why the team rebounds 26 percent of their misses, the sixth-highest offensive rebounding rate in the league. Both the Thunder’s offensive efficiency and offensive rebounding rates decline precipitously when Kanter isn’t on the floor.

And now Oklahoma City doesn’t have the luxury of sitting Westbrook and having Durant, a MVP-caliber player in his own right, manage the offense in his absence. This season the Thunder are scoring 98.4 points per 100 possessions when Westbrook is on the bench compared to 106.6 when he’s on the court. That eight-point gap is the difference between the last-ranked offense (76ers) in the league and a top-10 offense (Milwaukee). It’s huge.

But it’s nothing Westbrook can’t handle. He’ll arrive at the AT&T Center Tuesday night for his first Spurs-Thunder game in the post-Durant Era, ready and willing to fire away. Nothing has changed in that regard.

For the Thunder fans’ perspective, visit Welcome To Loud City.