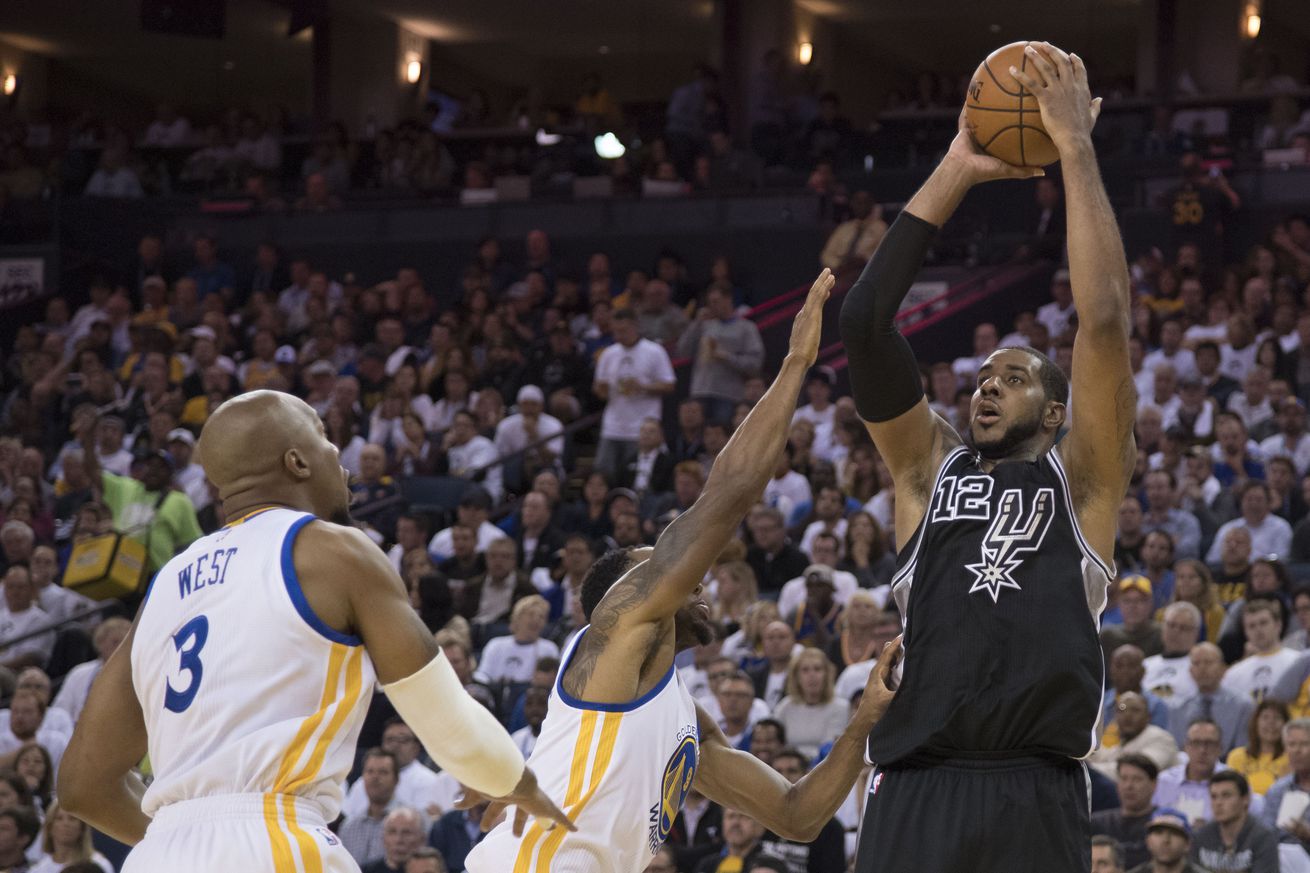 Round II of this heavyweight basketball matchup tips off tonight in San Antonio.

Round II between the San Antonio Spurs and Golden State Warriors is tonight.

These teams last met on the first day of the season, when this whole Kevin Durant playing for the Warriors was still a new thing. The Spurs throttled the Warriors out of their own building, 129-100, in what remains its largest defeat of the season. Durant put up 27 points and Stephen Curry added 26 points.

We expected fireworks that night — a team with Curry, Durant and Klay Thompson is privy to such expectations. Instead, the Warriors sizzled — missing 26 of 33 3-point attempts — and Kawhi Leonard provided a glimpse of what was to come with his first 30-point game of the season. Since his departure from Oracle Arena, with a dominating victory in hand, Kawhi has reached the 30-point threshold more times (23) this season than accomplished scorers like Curry (16), Durant (15), LeBron James (15) and Carmelo Anthony (15).

San Antonio was the talk of the NBA world for all of one day, as the media reveled in the Duncan-less Spurs soundly beating a Warriors team that won 73 games, blew a 3-1 lead in the NBA Finals, then added one of the best scorers of all-time to the roster.

It didn’t matter. Because Spurs.

But you should consider the extenuating circumstances at the time which engendered a blowout victory in the first place.

For one, this was Golden State’s first real opportunity to implement Durant into the offense and work out the kinks. Incorporating a career 27 point scorer into the rotation is not a seamless transition and it showed. The Warriors seemed especially un-Warriors like for much of the game, opting to make Durant comfortable rather than running its deadly offense at full capacity. The tension, media scrutiny and resounding questions about this unprecedented experiment bubbled over with an uninspiring effort against the Spurs Borg. At that time in the season, the Warriors’ worst opponent imaginable happened to be San Antonio — a calculating, unflinching, unrelenting gauntlet in its own right.

San Antonio won. Golden State lost. We’ve moved on since then — can you believe that was five months ago? — and the Warriors are better.

Once the Durant news settled and stabilized, Golden State turned into a juggernaut. Durant was shooting a career-high 53.7 percent from the field before his knee injury. Curry broke out of his shell and delivered some Curry-esque moments reminiscent of last season. Draymond Green continues to yap and yap and yap at everybody, while playing world-class defense. Klay Thompson is Klay Thompson.

So it’s safe to say the Warriors have recovered from the 29-point drubbing in Round I by the Spurs.

San Antonio is better, too, with Leonard making another leap in his evolving game. LaMarcus Aldridge is putting up comparable numbers to last season. The Spurs are 14-3 since inserting Dewayne Dedmon in the starting lineup, a gambit which unlocks the team’s defensive ceiling and props up Pau Gasol’s shooting efficiency. San Antonio sports the league’s fifth-best offense (109.6 points per 100 possessions), top defense (100.8 points per 100 possessions) and the fourth-best point differential (+8.0) in Spurs history.

Which means Saturday night will be a glorified preseason game, only with real stakes. 1.5 games separate these teams in the standings. A win for the Spurs clinches the head-to-head tiebreaker and shaves the margin to 0.5 games with a month left in the season.

Let’s take a look at some numbers since February 24, which is a totally random date with no importance whatsoever.

Player A is Pau Gasol. Player B is Steph Curry.

Since Gasol moved to the bench on February 24 — ok I lied, the date is relevant — he’s been firing away at a ridiculous efficiency. For context, he’s made more 3-pointers (13) in this two-week stretch than his first five seasons combined (10).

We may have a serious Like Mike situation on our hands here. Did Gasol steal Curry’s powers? If so, how did he get Curry’s own shoes to become infused with his basketball magic and grant him the power of shooting? Is he the new Steph Curry? Is Steph Curry the old Pau Gasol? Is this real life?

I don’t know, but I’ve been told numbers never lie.