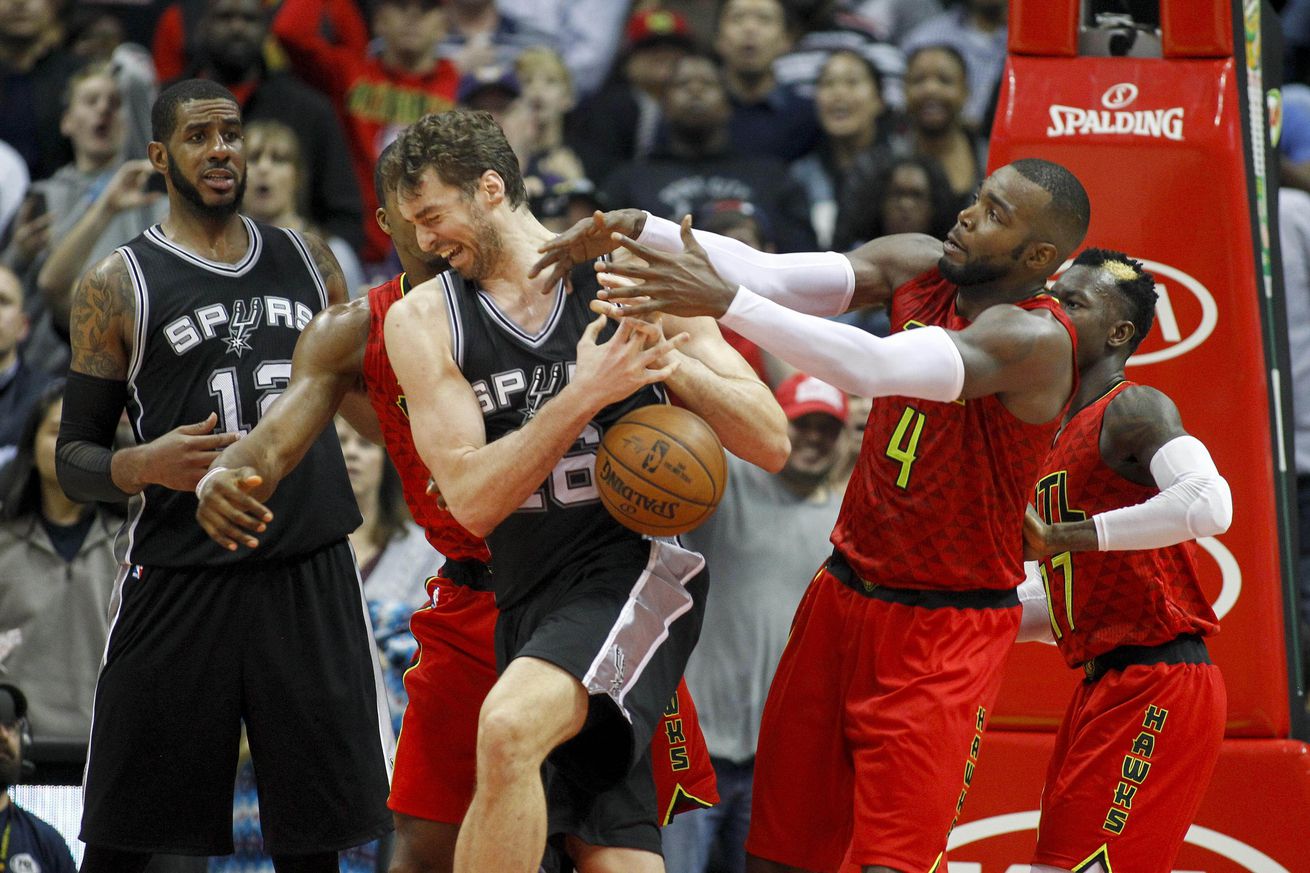 The Spurs face the fifth-seeded Hawks in another nationally televised game.

Back in 2015, the Atlanta Hawks captivated the minds of small-market NBA teams idling on the treadmill of mediocrity.

Atlanta showed it was possible to build a contender from the ground-up without a franchise player on the roster. The Hawks wrestled the No. 1 seed away from LeBron James’ Cavaliers that season, with no one averaging more than 17 points per game. Mike Budenholzer, in his second season away from San Antonio, won the 2014-15 Coach of the Year award for his efforts in successfully replicating the Spurs model in the Eastern Conference. In fact, Budenholzer’s Hawks won more games in 2015 (60) than the Spurs (55).

That Hawks team shared the ball, assisting on a league-high 67.6 percent of its field goals — a mark better than the “Beautiful Game” Spurs. Paul Millsap led the team in scoring (16.7 points per game), followed by Jeff Teague (15.9 ppg) and Al Horford (15.2 ppg). In all, the Hawks featured six players averaging double-figures in scoring.

An Eastern Conference Finals berth against Cleveland meant Atlanta had arrived. LeBron averaged 30.3 points, 11.0 rebounds and 9.3 assists in a four-game sweep, but the foundation for future success was in place.

Two years later, Atlanta is a mediocre basketball team regardless of how you slice it. The elite defense remains intact — only San Antonio, Golden State and Utah allow fewer points on a per-possession basis — but the once free-flowing offense that captured the imagination of the league is in a state of free-fall. As it stands, Atlanta is scoring a lowly 103.1 points per 100 possessions, spotting them 26th place in the league. The Lakers (20-45) and Suns (22-44) score more efficiently this season.

This year’s team looks nothing like the 2015 Hawks. DeMarre Carroll left for Toronto. Al Horford signed with Boston last offseason. Atlanta traded Jeff Teague to free up minutes for Dennis Schroeder. In January, the Hawks completed their teardown by sending Kyle Korver to Cleveland.

Except this isn’t a 76ers-style teardown. Atlanta will make the playoffs this season. They might even be able to earn home-court advantage in the first-round.

But the franchise trajectory flatlined in 2015 and is declining with each season. Signing Dwight Howard to a three-year, $70 million contract to replace Horford was a confusing gambit, because his timeline doesn’t fall in line with the other pieces on the roster. His history of being a disgruntled teammate doesn’t make matters easier. Schroeder is a hot-head with some potential. Millsap, still the team’s best player, remains in a murky long-term situation with the franchise. He’s a frequent player mentioned in trade rumors and the Millsap-Howard pairing barely breaks even (+0.3 net rating) when they share the court together.

Atlanta spent the past few seasons exorcising the quality character guys and high IQ basketball players needed to run a Spurs-esque offense. It worked in 2015, because the pieces in place subsumed its ego for the greater good of the team. That’s why Atlanta won 60 games.

This year’s squad is on pace for 45 wins, though its meager point differential (-0.4) fits the statistical profile of a sub .500 basketball team and not the fifth seed in the East. The offense is in shambles. A first-round exit is likely.

Budenholzer earned his first win over his former boss back in January. It took five quarters to get the job done, with Kawhi uncharacteristically missing two big shots in the waning seconds. (His shot at the end of the fourth quarter touched every part of the rim, before falling out.)

The game was in Atlanta. That is an important distinction to make, because the Hawks fare much worse when they play in San Antonio. Since Tim Duncan was drafted, way back in 1997, Atlanta is 0-18 against the Spurs in San Antonio. They’ve been outscored by 15.9 points per game in these meetings.

The Spurs started Carl Herrera at power forward the last time the Hawks won a game in San Antonio.