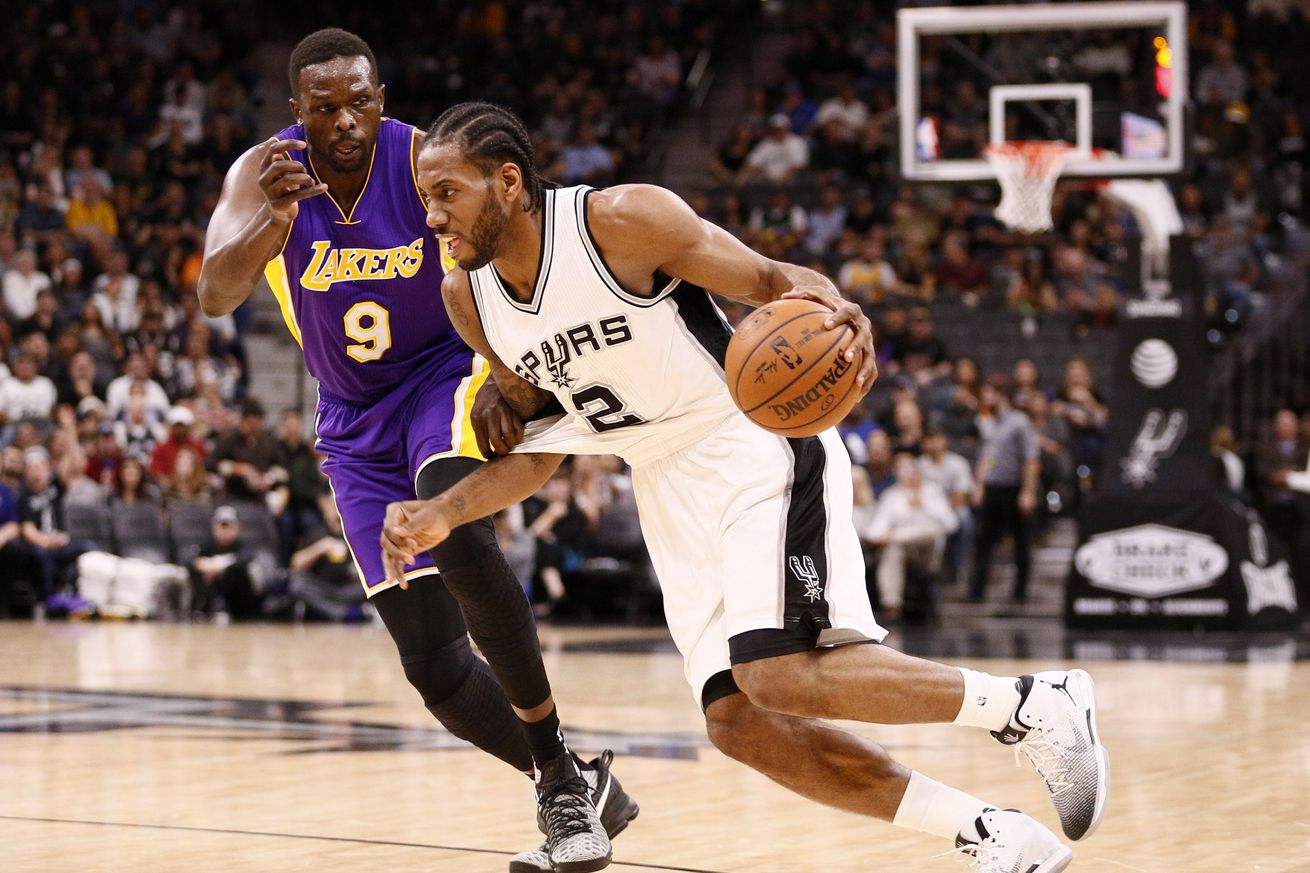 In the last game of the Rodeo Road Trip, the Spurs play a matinee with the Lakers.

The stakes remain high for the Lakers, in spite of a 19-40 record that places them far outside the periphery of playoff contention.

Three-fourths of the regular season is complete, meaning losing is the new winning for bottom-feeders like the Lakers.

Los Angeles would owe a first-round pick to the Philadelphia 76ers if it fell out of the top three picks, incentivizing Luke Walton’s team to lose games to increase its chances of securing the selection. If the Lakers finagle themselves into a top three pick this season, the pick would become the 76ers’ next year regardless of standing.

By then, the thinking goes, Walton will have another year of seasoning with a young core, highlighted by D’Angelo Russell, Julius Randle, Brandon Ingram, Jordan Clarkson and Insert Rookie Selection Here.

Keeping the pick this season ensures the Lakers add another asset to its cupboard — in preparation for a free agent run at Paul George — and improve its win trajectory in 2018. In theory, the 76ers would get a worse pick next season because the Lakers figure to be better. But stranger things have happened in the NBA.

The Lakers aren’t catching Brooklyn (9-48) in the standings, but the tank battle between its division rival Phoenix Suns (18-40) carries even more contextual significance. Just a half-game separates the two teams before a final matchup in March. The team with the second-worst record has a 55.8 percent chance of picking in the top three; the percentage plummets nine points to 46.9 percent for the third-worst team. Beating the Suns — or, in this case, losing — should be a legitimate course of action for a Lakers team trying to find its way back to NBA relevancy.

That’s the big-picture. On a small scale, there is still basketball left this season. San Antonio’s last game of the Rodeo Road Trip comes against a beleaguered Lakers team, sporting a 9-30 record since December 1. Only Brooklyn has a worse record in this span.

An encouraging 10-10 start in the first month was mired by an eight-game losing streak in early December. The goodwill for Walton’s tenure receded. Los Angeles’ offense, an early bright spot, regressed to a bottom-third unit. The defense continued to allow opposing teams a free pass to the rim, ceding a 65.3 field goal percentage in the restricted area, the second-worst mark in the league. No team has allowed more points (111.6 per 100 possessions) since December.

This is a bad basketball team — and that might be encouraging for the Lakers future.

Dedmon in the starting lineup?

Pau Gasol returned to the lineup Friday night, after missing a month of game action. He began the game on the bench, while Dewayne Dedmon continued to start alongside LaMarcus Aldridge. (Two months ago I made the case for Dedmon to start instead of Pau.)

The lineup configuration worked well. Dedmon corralled 12 rebounds, swatted four shots and alleviated the defensive pressure on Aldridge. On two possessions in particular Friday night, Dedmon was switched on to Chris Paul and he didn’t waver. Paul hoisted two contested mid-range shots over Dedmon’s outstretched arms that clanked off the iron. Gasol contributed a double-double (17 points, 12 rebounds) in his first game off the bench since 2013. He made 5 of 7 shots, including three 3-pointers.

San Antonio outscored opponents by 8.9 points per 100 possessions with Gasol in the starting lineup. (That’s very good.) Insert Dedmon in Gasol’s place and the Spurs’ net rating climbs to 18.0 points per 100 possessions. (That’s very, very, very good. Golden State’s net rating this season is 12.7, for context.) With Dedmon, the Spurs grab a higher percentage of offensive and defensive rebounds. The defensive rating stabilizes without the offense taking a noticeable hit, too.

Which begs the question: Will Pop maintain the status quo or re-insert Gasol in the starting lineup? But, first, let’s examine a few possible reasons why Pop brought Gasol off the bench Friday night.

Perhaps we’ll see some clarity to this situation this afternoon.

For the Lakers fans’ perspective, visit Silver Screen and Roll.