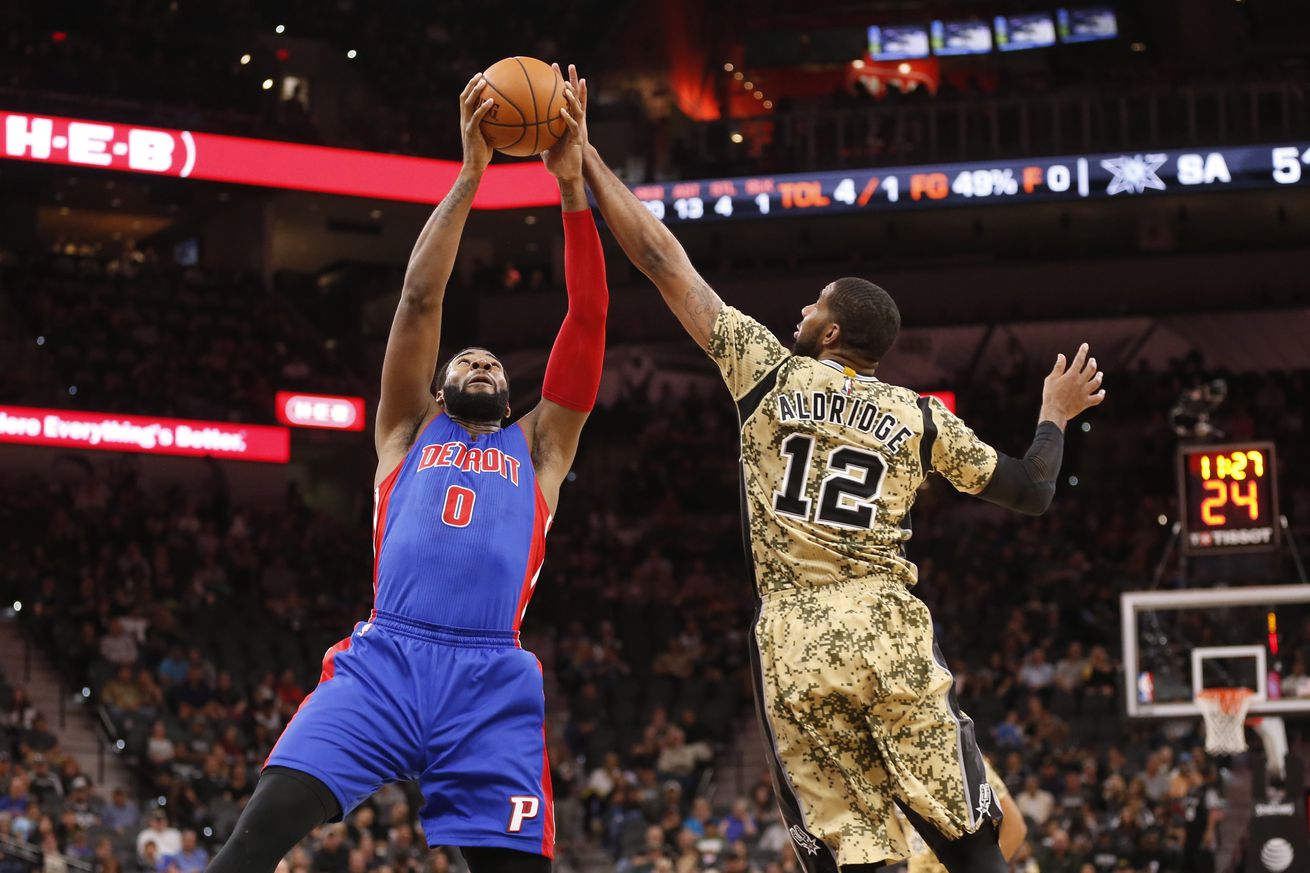 The Spurs look to improve to 2-1 on the Rodeo Road Trip as they roll into the Motor City.

Fresh off an eight-point win against Philadelphia Wednesday night, San Antonio continues its 7,400 mile trek around the country in Detroit.

The Pistons are treading below the .500 mark for the season, though a 25-28 record is still cozy enough to earn a playoff spot in the Eastern Conference.

Stan Van Gundy’s squad is buoyed by its 10th-ranked defense (allowing 105.0 points per 100 possessions) and a stranglehold on the defensive glass. Its league-leading defensive rebounding rate (80.5 percent), low turnover rate (fourth in the league) and slow pace allows Detroit to limit the total possessions in each individual game. That’s especially important when the Pistons offense is ranked 21st on a per-possession basis — in the same tier as bottom-feeders like Dallas (20th), Phoenix (23rd) and the Lakers (24th).

Detroit’s Pythagorean win expectation — a metric that uses point differential to calculate an expected win-loss record — puts them at 26-27 this season, but there is reason to believe that the Pistons could be outperforming its record by an even larger margin.

Why? Because the Pistons are terrible in “clutch” situations, defined by NBA.com as the last five minutes of a game with a five-point margin or fewer. They’ve lost 14 of its 23 close games, the fifth-lowest winning percentage in the league. For context, teams are expected to win about half of these games regardless of talent level. What’s more: Detroit’s field goal percentage plummets to 39.4 percent in these situations. With these peripheral statistics it’s no surprise that the Pistons are being outscored by 24.9 points per 100 possessions — the worst mark in the NBA. Perhaps this trend is because of Drummond — shooting 43.6 percent at the foul line is a liability down the stretch — or perhaps the sample size isn’t large enough. But it’s certainly a factor in why Detroit is below .500 this season.

This Pistons team is well-coached and stocked with quality rotation-level players. There’s six players on this year’s roster averaging more than 10 points per game. Each player is under 27, too. Drummond has warts, but he’s still a force that requires attention in the pick-and-roll (though he only averages 1.9 possessions per game). Kentavious Caldwell-Pope, up for restricted free agency next year, is gonna get paid. He’s fourth among shooting guards in ESPN’s real plus-minus (RPM) and he’s one of 15 players this year averaging at least 14 points, 2 3-pointers and one steal per game. Tobias Harris and Marcus Morris can oscillate between both forward positions giving the roster additional utility. Reggie Jackson is an inefficient scorer, but there is still some value in having a player that can unlock the pick-and-roll with a low turnover rate.

San Antonio has failed to reach 100 points in just 12 games this season. One of these instances occurred against Detroit in a 10-point Spurs victory at the AT&T Center back in November.

So as long as Van Gundy is coaching, it won’t be easy sledding for the Spurs offense.

Detroit plucked Marjananovic away from the Spurs for three-years, $21 million last offseason. Thus far, he’s averaging just 6.8 minutes per game and he has nearly as many DNPs (31) as field goals (32) this year.

Year One of the Boban Experiment hasn’t been a seamless transition and it may be in danger of ending entirely with reports surfacing about potential trades. Detroit currently has a logjam in the frontcourt; Marjanovic is competing for minutes with Drummond, Aron Baynes and Jon Leuer. There simply isn’t enough time for him to excel, so a change of scenery may be ideal. His per-36 numbers (20.4 points, 17.0 rebounds) and Player Efficiency Rating (26.1) are still excellent if that means anything.