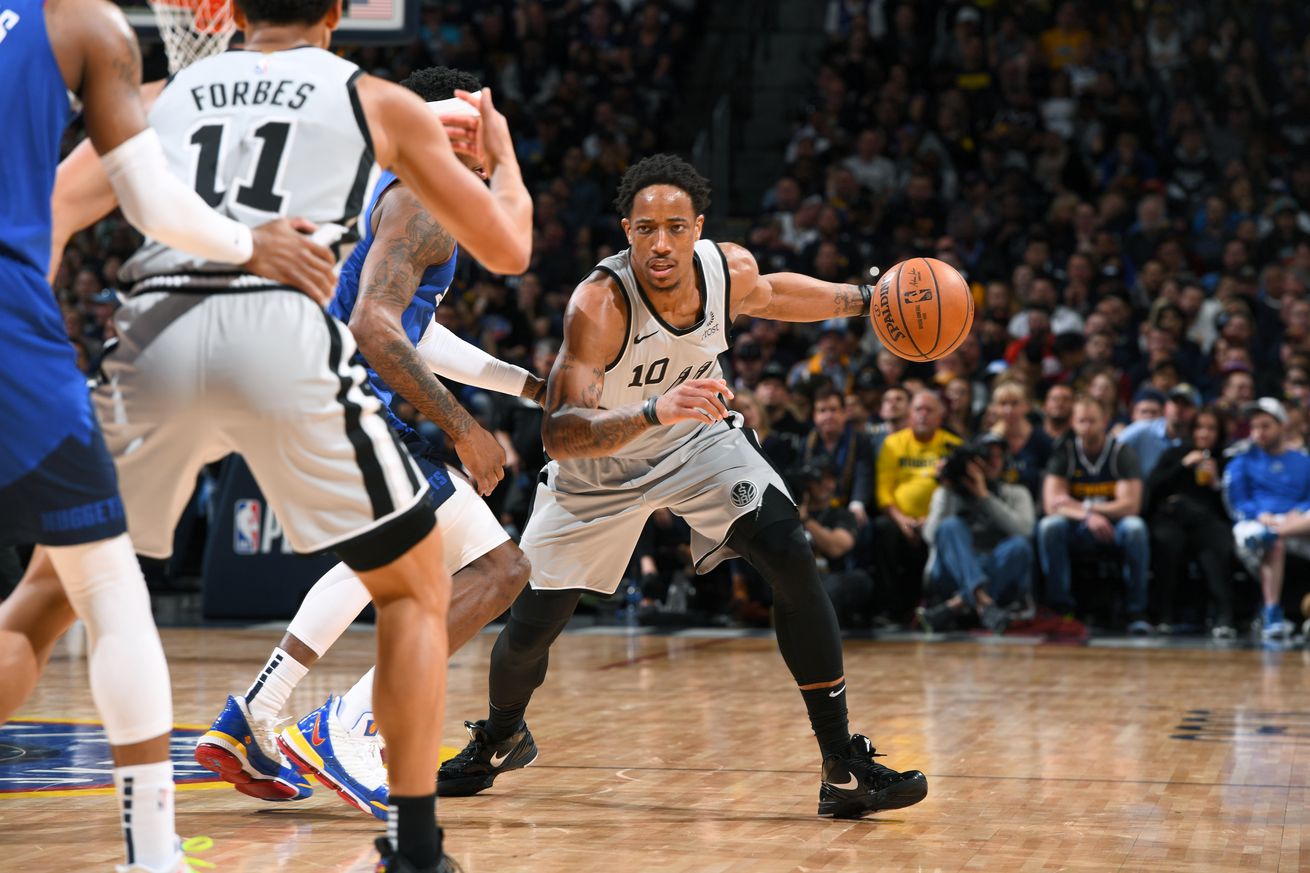 Can the Spurs get greedy and head home up 2-0 against the Denver Nuggets?

The Spurs, the worst road team in the Western Conference Playoffs, found a way to buck that trend. Holding Denver to well below their season average at home (just 96 points) was a phenomenal accomplishment, especially when factoring in the altitude factor that comes with playing at Mile High. They shot exceptionally well from beyond the arc, were able to neutralize the Nugget’s transition attack, and managed to win the overall battle on the glass.

While there was a lot to love in Game 1, there’s still plenty the Spurs can clean up ahead of tonight’s Game 2.

Show more focus on the glass

Though the Spurs won the rebounding battle (47-46), Denver was still able to pull in 13 offensive rebounds, which is one more than their regular season per game number. As noted by PtR’s CharlieOCharles:

Those 17 points are huge and a lot of them came down to guys simply not boxing out, like this early offensive board to Nikola Jokic:

Jakob Poeltl guards the move perfectly, but fails to follow through and box out Denver’s #1 rebounder. Patty Mills sneaks in as well but doesn’t even touch Jokic, who is able to go right back up with another shot attempt before getting fouled.

Offensive rebounds can also lead to wide-open 3’s. Late in the first quarter, Will Barton missed a 3-pointer that found its way into the hands of Jamal Murray, who found Paul Millsap on the right wing for a wide-open 3 that he missed:

Millsap had all day to line this one up, but still missed. DeMar DeRozan (who actually had a very strong rebounding game, leading SA with 12) looks like he’s in position to give up another board to Barton, but the ball clanks towards Bryn Forbes instead.

A play late in the 4th quarter showed that just grabbing rebounds isn’t enough, you have to follow through. With the Spurs clinging to a 6 point lead, Murray had his shot partially blocked by Derrick White and Rudy Gay came up with the rebound, but was completely unaware that Murray was still in the picture:

Jamal Murray took it back and got an and-1 pic.twitter.com/g9N6vSL1jM

Hopefully some film prep and coaching by Gregg Popovich can help them to lock-in more effectively on the glass and avoid some of the silly offensive boards they gave up to Denver in Game 1.

Will Denver shoot that poorly again beyond the arc?

The Nuggets hit just 5 of them.

Part of that may have been by design. San Antonio possibly figured that they could live with Barton, Millsap, and Jokic taking 13 threes, of which they went just 1-13. Of that trio, Barton and Jokic shot 34% and 30%, respectfully, on the year and Millsap is by no means a volume shooter. Their two best shooters, Malik Beasley and Monte Morris, were a combined 1-3 from three in Game 1. Murray, who shot nearly 6 threes per game this year at a 37% clip, went 0-6, with none being classified as wide open.

Wide-open shots are typically something you don’t want to give up as a defense, but San Antonio found a way to barely hang on in Game 1 going that route. While it likely won’t be a sound strategy going forward, the numbers would seem to indicate that it’s worth it to risk giving up shots to guys that are meh from certain spots on the court and either preventing them from taking higher percentage ones or letting someone else take those same shots.

The Spurs need THIS Derrick White (and more)

If the Spurs are going to win this series, they will need Derrick White to be more or less what he was in Game 1. From casually pump faking defenders to get to his spots to stealing the ball away from Murray to effectively steal Game 1, White had the entire package on display in Game 1. He scored 16 points and played a large part in shutting down Murray. He also had the highlight of perhaps the entire opening weekend of the NBA Playoffs with this vicious dunk on Millsap:

That being said, he can be even better. He had to sit early after picking up his second foul just 2 and a half minutes into the game and had what could have been a very costly turnover near the end of the game.

White has exceeded expectations all season, and it was awesome to see him make his first playoff start come not far from where he played college basketball with both the Colorado-Colorado Springs Mountain Lions and Colorado Buffaloes. It will be important for him to continue to show out and help ease the load on DeMar DeRozan and LaMarcus Aldridge.

The Spurs grabbed the homecourt advantage with their win in Game 1, and while they were spectacular at home themselves this season (32-9), there would be a certain dominance afforded to them by winning tonight and taking a 2-0 series lead home with them to San Antonio. It’s easier for young guys to win at home, and Denver, which is comprised of a lot of playoff first-timers, was the best home team in the league this season.

While the Spurs were pretty bad on the road, their victory in Game 1 showed that they are at least capable of winning games in that setting. An 0-2 deficit could have this young Denver team frazzled and San Antonio primed for the upset.