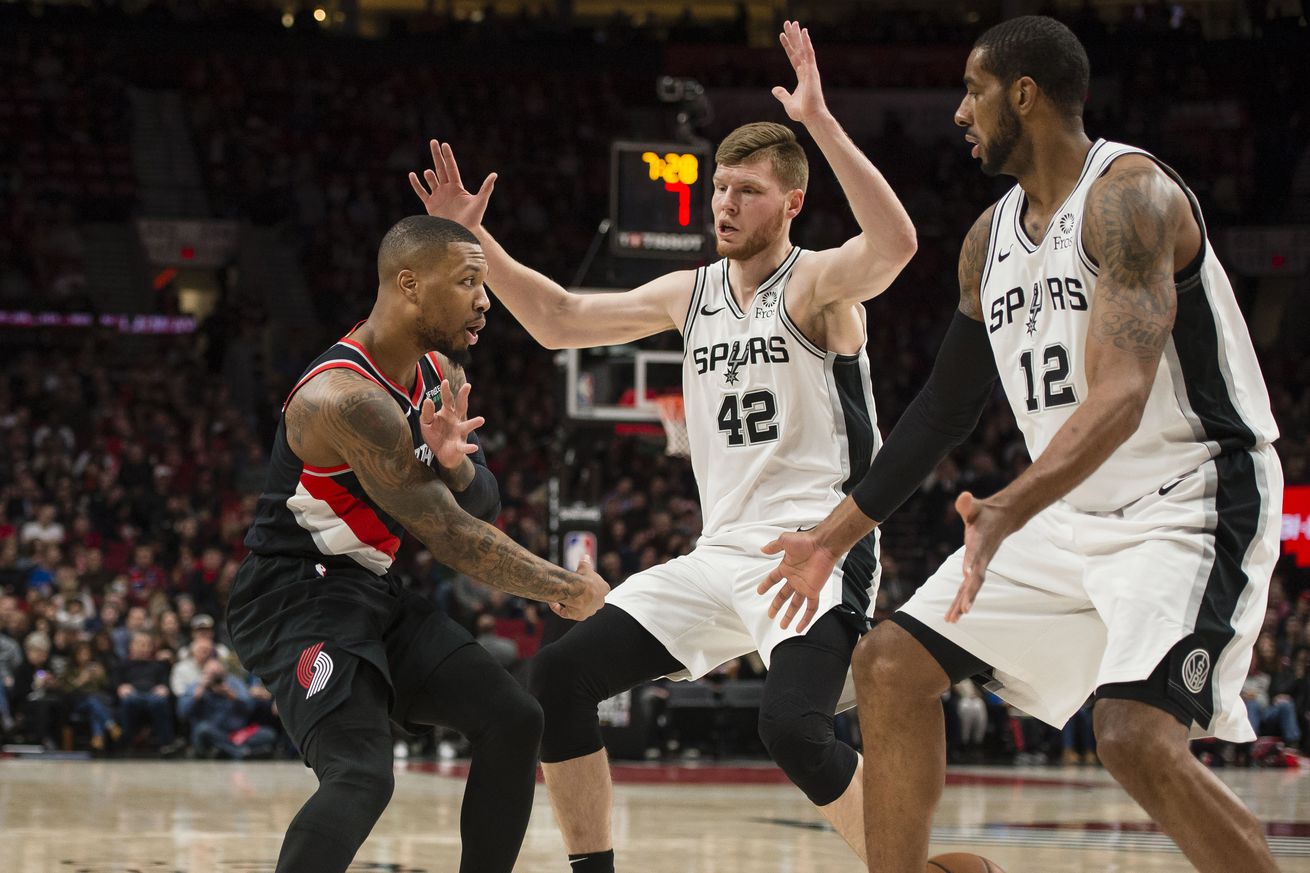 On the second night of a back-to-back, a tough matchup awaits the Spurs.

The Spurs suffered a pretty frustrating loss the last time they met up with the Blazers back in February. In spite of 35 points from DeMar DeRozan, they were unable to keep Portland’s duo of Damian Lillard and C.J. McCollum from getting anything they wanted in route to a 127-118 defeat. They also decided to allow Jusef Nurkic go off for a cool 22 points, among many other defensive travesties. All in all, not a great game plan from the Silver & Black.

The loss up in Portland also came near the beginning of the Rodeo Road Trip and what we now understand to be the low point in the Spurs season. Hopefully. Knock on wood. Things have certainly turned around since then for the Spurs, currently in the midst of a seven game win streak that has seen them clear a little space between themselves and that dreaded nine spot that would have them on the outside looking in with regards to the playoffs for the first time since the Clinton administration.

So, yea, the Spurs are in a much better place heading into tonight’s rematch with the Blazers. They are still sitting pretty in the 6th seed, two games back from the Thunder and two and a half back from their Saturday evening visitors. The playoff push is in full swing and things are as tight as ever.

The Blazers also happen to be rolling into San Antonio on the second night of a back to back following their 120-110 victory in New Orleans Friday Night. They are winners of three straight and have also proven to be one of the most consistant teams in the league throughout out the season, although SEGABABA rules indicate that any and all momentum, reason and logic can generally be thrown out the window on nights like this.

Damian Lillard isn’t going to win the MVP this year, but he is right outside the conversation and is about as electric of an offensive player that the Spurs will see outside of anyone wearing a Golden State jersey. C.J McCollum is extremely dangerous and the rest of Portland’s roster is full of guys capable of beating you on any given night. Jusuf Nurkic has caused the Spurs problems in the past and it will be interesting to see if the big lineups Popovich has been starting with lately will have any effect on that.

The Spurs are playing about as well as they have all year. Normally, having to see a team like the Blazers on the back end of a double header would be a pretty tough look, but Friday night’s matchup with the Knicks didn’t really see anyone have to sweat too much. They’ve gotten a decent amount of rest lately, are pretty much injury free, and should be as close to full strength as you could possibly want at this time of the year.

It’s always a little interesting when LaMarcus Aldridge is matched up against his old team and there has been more than a little buzz surround him and his former teammates lately. Hatchets have been buried and there’s even whispers of a late career reunion down the road being bandied about. Who knows what to believe anymore, but there will definitely be plenty to observe for any and all body language doctors tuning in tonight.