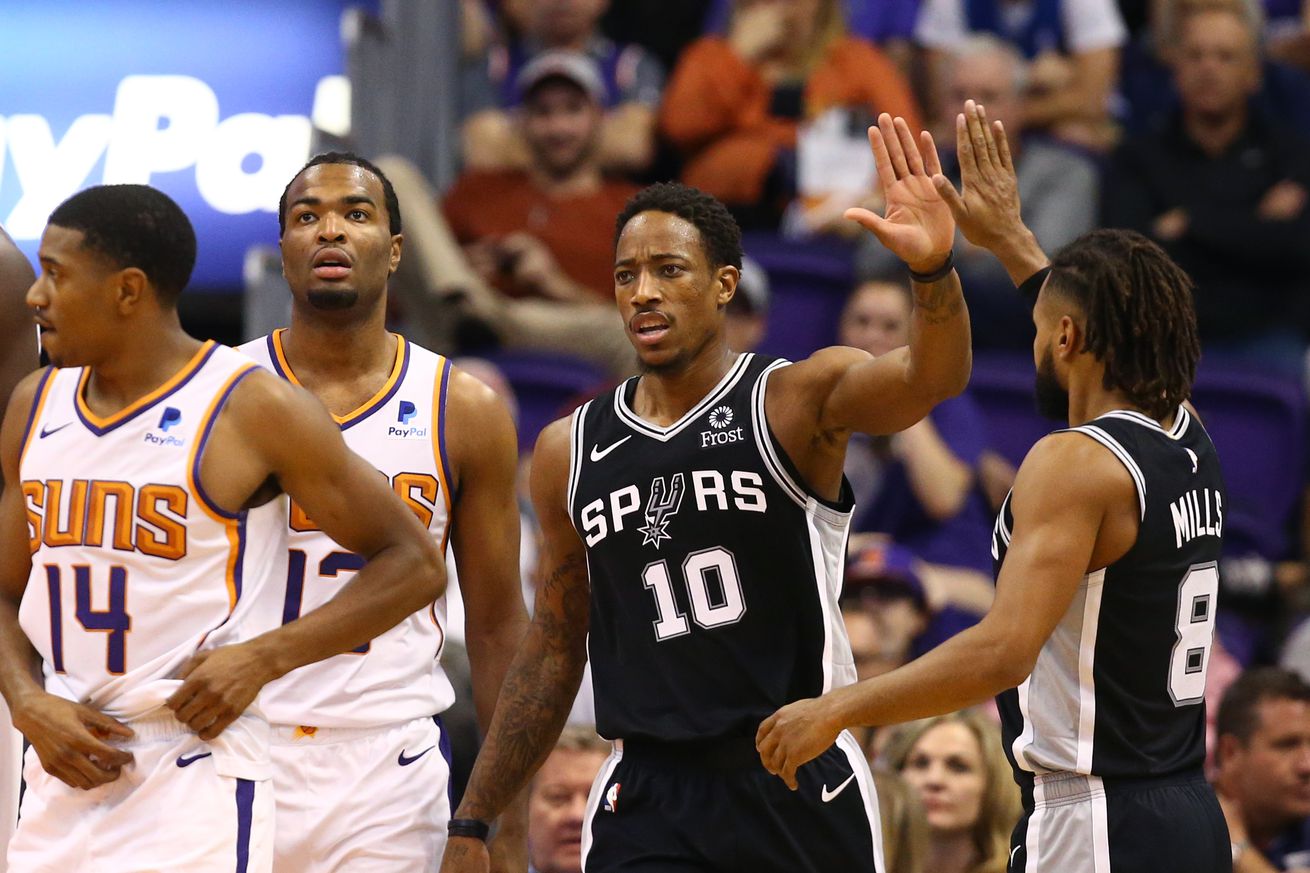 The Spurs have a chance to extend their home winning streak against a banged-up Phoenix team.

The times they are a-changing.

Would you believe that it’s been ten years since the height of Spurs–Suns rivalry? In back-to-back to playoff series (2007 and 2008), the Phoenix Suns and the San Antonio Spurs were embroiled in a stylistically-opposed tug-of-war that produced some of the most memorable moments for Spurs fans. We laughed as Pop employed the Hack-a-Shaq on the first play of the game, shivered at sights like Steve Nash’s horror-movie makeup nose explosion and Robert Horry’s you-call-it-dirty-I-call-it-savvy hip check, and stood in awe of the most clutch three in Spursland since a certain Memorial Day in 1999 . . .

Nowadays, those memories are just that. Memories. The cores of both teams are all retired and Mike D’Antoni took his turbo-powered offense to Houston (with some rather unfortunate pit stops in New York and Los Angeles). The only remnant of those bygone days that you’ll see at the AT&T Center on Tuesday when the Suns come to town is old man Pop, like an oak tree unfettered by the noisy wind, rooted long ago in philosophies of “team defense” and the arcane “Spurs way.”

*Cue Montell Jordan’s “This is How We Do It”

As Bruno Passos noted, the Spurs stuck with what they know best on offense Sunday against the Jazz, taking just 14 three-point attempts on the game, which is the second least amount by any team this season. Rather, the duo of DeRozan and Aldridge was humming again, both topping the 20-point-mark and providing the steady baseline for the offense. The surprise contributor was Rudy Gay, who finished with just his third game scoring at least 20 this season. He made a huge impact banging down low with the Jazz’s sky-high frontcourt of Derrick Favors and Rudy Gobert whether that be in terms of heat-seeking dunks (of which he had three on the night) or securing a season-high 15 rebounds.

Chief, this ain’t it.

While the Spurs have spent the season trying to keep their head above water in the Western Conference playoff race, it appears that the Phoenix Suns were anchored with 50-pound weights this whole time. With only four wins on the season, Phoenix hasn’t been able to get it done on either side of the floor, ranking 28th in both offensive and defensive rating. Their past six games have been all been double-digit losses, and it looks like they’ve got another put-off veteran with news breaking earlier this week that they are looking to move Trevor Ariza. Simply put, this team stinks.

All that being said, it must be noted that one of those four wins was a 116-96 blowout against this Spurs team. Circumstances are bound to be different this time around: Phoenix will be missing their go-to scorer Devin Booker, and T.J. Warren and DeAndre Ayton (who beat up the Spurs last time for 27 and 17 points, respectively) are both battling injuries (ankle and illness) and may be on minutes restrictions. All in all, this seems like one where the Spurs flex their revenge muscles and clamp down to string together three wins in a row in the Alamo City.

For a Suns fan’s perspective, visit Bright Side of the Sun