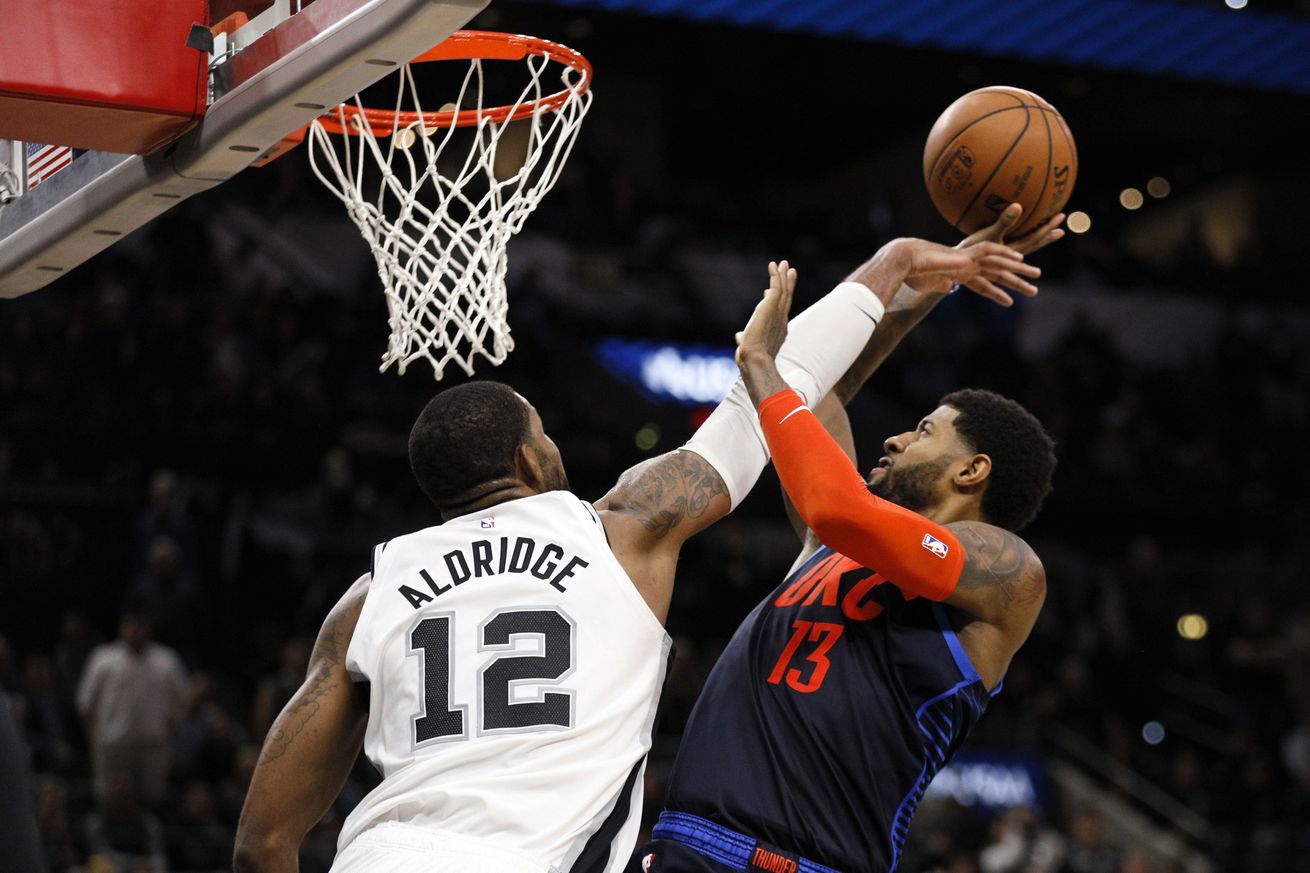 Game 2 of a 3-game homestand brings the Oklahoma City Thunder to the Alamo City.

Leaving a woeful February behind, the Spurs got off to a good start with their first post-All Star break win with a 105-93 victory over the Detroit Pistons. They’ll see their resolve put to the test tonight when they welcome an excellent Oklahoma City Thunder team, who find themselves sitting in 3rd in a loaded Western Conference with a stifling defense ranked 4th in Defensive Rating (106.3) and an offense that’s received a boost from creating turnovers, a career year for potential-MVP and DPOY candidate Paul George and the triple-double contributions of wily guard Russell Westbrook.

The Spurs and Thunder have faced each other twice this season, a home-and-away series that produced a double overtime classic in which LaMarcus Aldridge scored a career-high 56 points in a Spurs win and an away loss that saw them start strong and fade in the second half. To beat this team, they’ll have to control the ball, cover up the few very good shooters that OKC has, and avoid an atomic blast from George.

White missed the entire first half of the Rodeo Road Trip with left heel pain. Coming back for the 2nd part of the road trip on a minutes restriction, White looked unable to find a rhythm in the first 2 games of his return, as he knocked off the rust and fought in his limited playing time. That changed when he was given nearly 30 minutes against the Pistons and used each of them well. In early transition, he runs a quick pick and roll with Poeltl and gets to his spot around the elbows, taking and making a pull-up jumper:

Earlier, he ran pick and roll with Aldridge and drove to around the same spot, pulling both Andre Drummond, Bruce Brown, and the eyes of Reggie Jackson and Blake Griffin with him, leaving Aldridge wide open for a jumpshot, that he missed.

Aldridge misses the shot, but White sets him up perfectly pic.twitter.com/lvubhuT4I5

Here he makes a quick decision as soon as DeMar DeRozan kicks the ball out to him on the wing. Pump-faking Brown as soon as he goes to closeout, White drives right through the teeth of Detroit’s defense and dumps the ball off to Jakob Poeltl, who gets fouled.

Most guards have a tendency now to hold the ball for a second or two too long at times on the catch when they could be benefiting from making a quicker decision to attack a defense on its heels. This is one of the qualities that sets White apart and shows his maturity when it comes to the game. The Spurs will need him to score tonight and match-up with Westbrook on the defensive end to have any shot of winning.

This game features the top team in taking care of the ball (Spurs average the fewest turnovers per game this year with 12.4) and the top team in causing turnovers (OKC forces 17.5 turnovers per game). The Thunder have the leader in steals per game (Paul George, 2.3), the runner-up (Russell Westbrook, 2.1), and a third guy in the Top 15 (Steven Adams, 1.6). They average 18.7 points per game on the fastbreak, no doubt fueled by this ability to make their opponents cough up the ball. It’ll be important for the Spurs to show discipline when moving the ball, be it with the pass or the dribble. A turnover like this one:

Will almost surely lead to Westbrook or George leak-outs for crowd-killing dunks. The first one shows Patty Mills going to make his move before he fully catches the ball, the second shows a lack of awareness on the part of Rudy Gay, who was completely clueless about Reggie Jackson going behind him to chase White.

The Thunder will be very aggressive going for the ball and it’ll be on the Spurs to make sure they don’t let OKC have too many gimmes.

On most MVP rankings I’ve seen, Paul George finds himself in the top 5 and is usually firmly in the top 3. He’s had a fantastic season scoring and shooting the ball (career high 28 ppg on 45/38/84), setting up teammates (4 assists a game), and playing a smothering brand of defense that is both aggressive and technical. On offense, he’s capable of scoring in all three phases, either on a catch and shoot, ISO, or a standstill shot with no dribble or movement, like he does here against the Denver Nuggets:

He’s also shown how capable he is of setting his teammates up for shots. Here he plays a little Spurs-style ball and creates offense for Jerami Grant out of the pinch-post:

The aggression of Westbrook and the completeness of George as a scorer and ball handler make OKC more dangerous than you’d expect from their ranking as 14th best offense per 100 possessions, although they do rank 2nd in points per game. While they only rank 18th in 3 point percentage at 35%, there’s no doubt that’s brought down by the brick-laying of Westbrook (who is jacking five 3s a game and sinking just 27% of them), as George, Grant, and Terence Ferguson are all shooting very good percentages.

The Spurs will have to do a better job of guarding George in the pick and roll than they do here when Bryn Forbes gets caught on a screen and Aldridge is too far back to contest a Wayne Ellington 3:

He also has a great sense for the ball and solid fundamentals, as highlighted by his #1 steals per game rank. Here, he gets his hands up as he closes out on Paul Millsap’s attempted pass before going off to the races:

The Spurs will be able to live with Westbrook shooting jumpers for the most part, but they need to make sure they aren’t giving George anything easy. Though undersized, I wouldn’t be surprised to see Derrick White match up with him on occasion when the Spurs go to their man defense.

Who starts for Forbes?

Bryn Forbes left Wednesday’s win over the Piston’s early in the first quarter when he collided with Blake Griffin going for the ball. The starting guard for 62 of 63 games this season, Forbes is likely to miss tonight’s game with that calf injury, in which case Pop has a few options. He could roll with a White/DeRozan/Gay/Bertans/Aldridge lineup that would have plenty of height to keep mismatches minimal, though it would leave the bench a little thin. A call-up to Lonnie Walker, who has killed it his last few games down in Austin, could resolve that issue though in terms of bodies.

I have a feeling, though, that Mills will get the start and struggle to contain Westbrook.

For the visitor’s perspective, check out Welcome to Loud City.