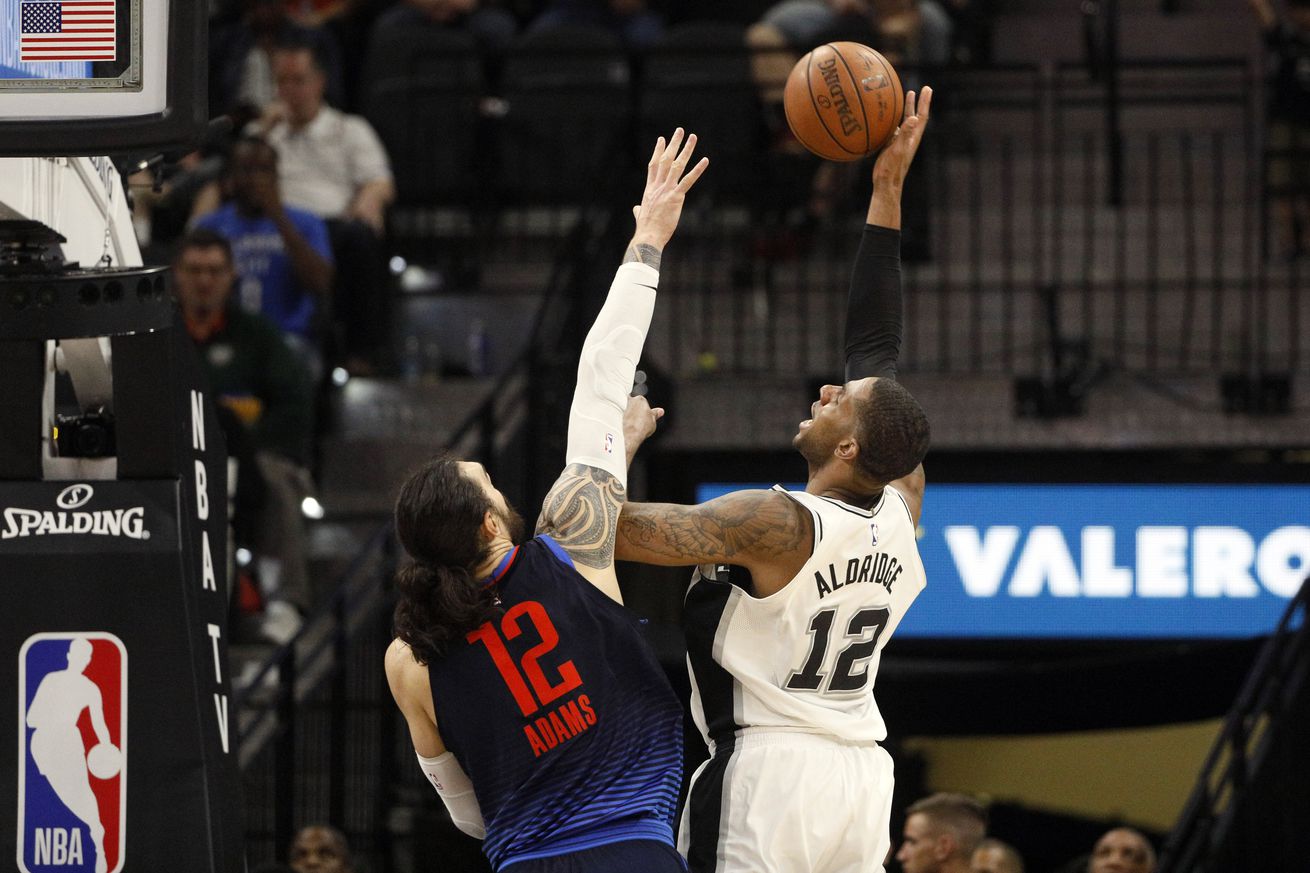 The Spurs play the first half of yet another home-and-away, this time against the Thunder.

Separated by just a few games in the standings, the home-and-away series that the Spurs are starting tonight and concluding Saturday against the Thunder could prove to be very important in terms of seeding. With only 3 games against OKC this season, two wins in a row against their rivals in from the Northwest Division would give the Spurs the advantage in any tie-breaker situation, should seeding come down to that come playoff time. It is imperative that the Spurs take care of business tonight against an OKC team with a Russell Westbrook who has struggled with his shot all season and losers of two in a row.

While the Spurs are slowly coming into their own on the defensive end as the season has gone along, the Thunder have been locked in at that end of the floor since the beginning of the season. Spearheaded by the defensive talents of Paul George and quarterbacked by, “The Last Samurai,” Steven Adams, the Thunder are tops in the league with a defensive efficiency rating (per 100 possessions) of 103.3. The Spurs, by comparison, rank 17th at 110.5, though they’re trending upwards since January. OKC likes to cause havoc and force turnovers, where they also rank first at just a tick under 17 a game.

Luckily for us, the Spurs have been on fire offensively, regardless of a reliance on, shall we say, less than ideal shots according to certain pundits of the game. Sitting 5th overall in offensive rating at 113.9 points per 100 possessions and 11th with per game averages of 111.9, San Antonio has built their offense to get the best shots possible based on their personnel, limit turnovers, and shoot a high percentage overall. San Antonio will face a true test tonight against the best defensive team that they’ve faced all year, but one that they should be well equipped to beat.

For years, Westbrook has been a thorn in the Spurs’ side. Uber-athletic and unfashionably stylish (in my humble opinion), it always feels like the Brodie has big games against San Antonio, who have often been helpless to guard his forays to the rim. Though he is once again averaging a triple double and has played better defense than he has in the past, Westbrook has struggled all season shooting the ball from basically everywhere on the court:

That’s a LOT of red for a player long considered an elite offensive talent. Westbrook is shooting a career low 63% from the line on the lowest attempts of his career since his sophomore season. From beyond the arc, no one who has attempted at least 2500 attempts has a lower 3-point percentage than Westbrook, though he doesn’t hesitate to launch nearly 5 a game from there this season.

Despite all of this, he is still to be feared in transition and at the rim, with back-breaking athleticism and a hunger to gobble up rebounds. It will be key for the Spurs to get back in transition off of misses and to box Westbrook out whenever OKC gets up any type of shot. In the end, he’ll probably end up with a triple double, but if San Antonio can force him to shoot anywhere outside of the paint, get more defensive than offensive rebounds, and turn the ball over a lot, they should be ahead of the game.

Move the ball, clean the glass

For the Spurs to win, they’ll have to focus on rebounding as a whole. Great box-outs for defensive boards are imperative, as OKC, between Westbrook, Paul George, Jerami Grant, and Steven Adams (especially Adams, who grabs nearly half of his rebounds on the offensive glass), is top 3 in grabbing offensive boards on the year. Preventing 2nd chance looks for a team that is middle of the pack offensively will be crucial.

San Antonio has been whipping the ball around the court as of late (sometimes non-conventionally) and ball movement will be crucial to attacking this OKC defense in the half-court. Post-ups for LaMarcus Aldridge should be strictly within the restricted area when going up against Adams, who is the type of big, physical center that Aldridge struggles with at times. There are no places for weak, lollipop passes to one another that are prime for picking against an OKC Thunder team that finds life in forcing turnovers (10 steals a game, again tops in the league). If the Spurs play like the team that is first in limiting turnovers and move the ball with purpose, they’ll find holes in an overly-aggressive Thunder team.

For the visitor’s perspective, please check out Welcome to Loud City.