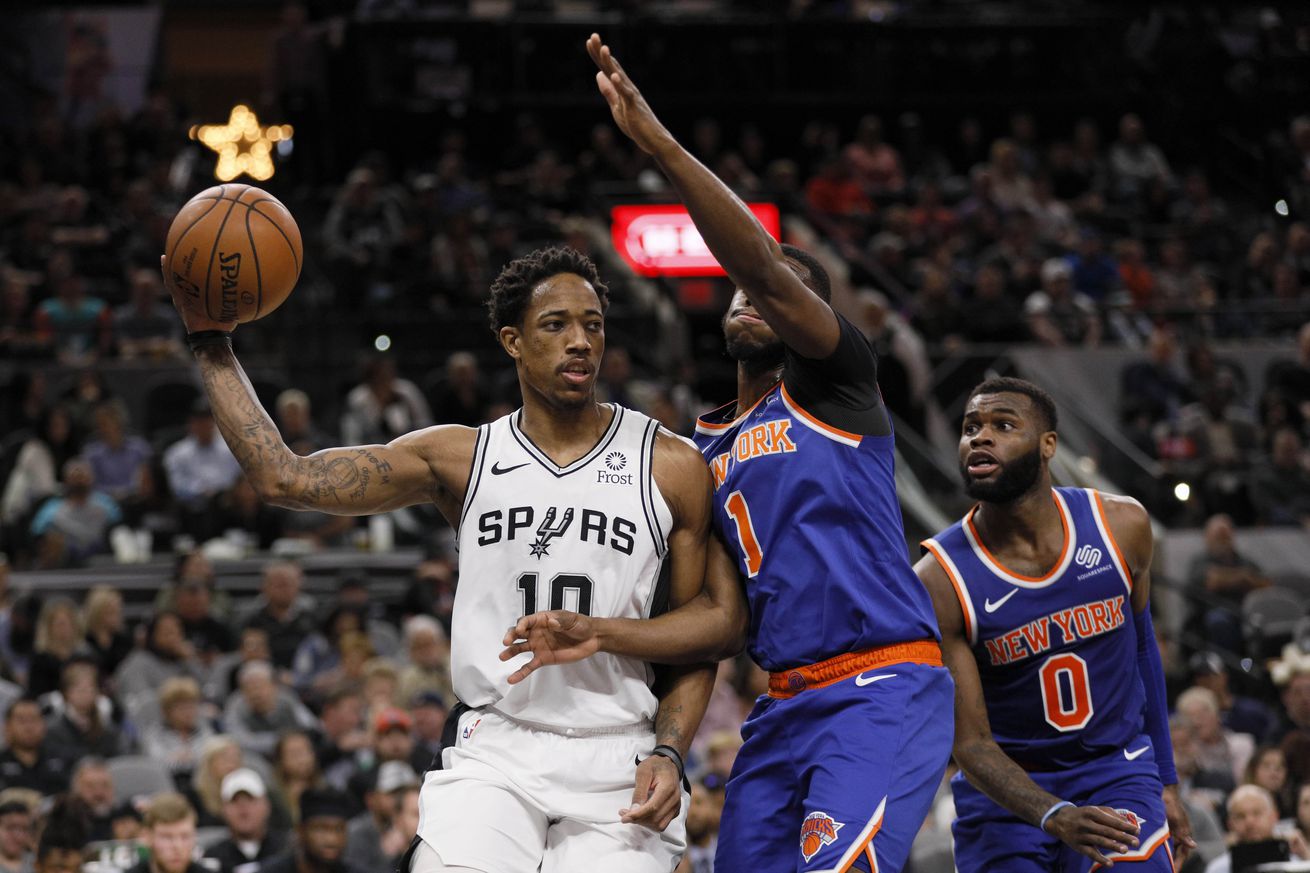 The wait is finally over! It’s been almost 6 months since the San Antonio Spurs last played meaningful basketball, 6 long months since they played an ugly winner-take-all game in the first round against the Denver Nuggets in last April’s playoffs, coming up short and closing the curtain on a season that was marked by arguably the most uncertainty head coach Gregg Popovich has ever had to deal with since taking over the reigns in San Antonio all those years ago in the BD (Before Duncan) era of Spurs basketball.

There’s plenty of uncertainty heading into tonight’s opening night tilt with the New York Knicks (to which we have tickets available!) as well, but it’s of the positive variety. Aside from the Marcus Morris signing drama (who would have thought he’d be playing in the Spurs’ opener after all?), the Spurs were their usual, chaos-free selves this summer. There were no big free agent splashes (although the signing of DeMarre Carroll should pay dividends, and they did re-up with Rudy Gay as well), partly because their books were nearly full and mainly because they truly believe in the promise of this young core that they’ve drafted the last couple of seasons, as their recent, “Spurs’ Stories,” series on Dejounte Murray, Derrick White, Lonnie Walker IV, and Bryn Forbes would appear to suggest.

The youth, athleticism, skill-set, and growing experience these guys bring to the table, combined with the veteran leadership and games of proven players like the ever-steady LaMarcus Aldridge, 2nd-year Spur and professional scorer DeMar DeRozan, a healthy Gay, the wildly energetic Patty Mills, all led by the smarts of a coaching staff helmed by arguably the greatest coach in the history of the game has the Spurs thinking they can improve on last season’s 48-win, first round exit campaign.

Aside from their well-known shot selection last season, the big thing that stuck out about the 2018-19 Spurs was Pop’s decision to start big with Aldridge and Jakob Poeltl in the front court. The Spurs’ starters last season were already thin on shooting from beyond the arc, and adding Poeltl (a traditional big man) to the mix further congested the court for them.

Throughout the preseason, Pop tried 2 key things out with the starting line-ups when Aldridge suited up. The first was the usual Aldridge/Poeltl tandem from last year, while the second was the insertion of another summer free agent signing, Trey Lyles. While Lyles is almost the same height as Poeltl, he is also a willing 3-point shooter, averaging 2.6 attempts from beyond the arc per game for his career. While he had a very down year last season in Denver (shooting just 25.5 percent on 3.1 attempts), he was just .3 makes per game off from his best volume shooting season in 2016-2017 (1.1-3.0 compared to last season’s 0.8-3.1).

The threat of Lyles from beyond the arc is something that has likely been taken into consideration. It allows the Spurs to stay big, provides DeRozan, Murray (who is a developing shooter, but still unproven) and Aldridge some much-needed room to operate, solidifies the bench Center position with a very skilled big in Poeltl, and it lets Pop use Gay as a bench scorer, something that he’s shown a fondness for since Gay has been there.

Lyles got the nod in the Spurs final 2 preseason games, both wins, and even though he scored just 2 points in those games combined and missed all 5 shots he took, he was still in plus-territory in the Real Plus/Minus statistic.

Let the young dogs run and turn defense into offense

Last season, the Spurs were at the very bottom of the league in both transition possessions and points scored in transition, accounting for just 11.8 of their possessions and only 12.9 of their points. They were also last the in the league in steals per game (6.1), which did nothing for their transition attack. They were, for the most part, a grind-it out, scrappy, half-court offense, relying mainly on vets not exactly known for their defense and young guys.

The return of Murray alone should give them a boost in all of these categories. Murray, the youngest player to ever make an All Defensive Team. is a disruptive defensive player, using his long, wiry frame to play the passing lanes. He is also part of a Spurs stable (alongside White and Walker) that is young, athletic, hungry, and ready to be let loose.

This year’s Spurs have the talent and athleticism to run with some of the best teams in the league, and they could show off these traits in the very first game of the season against a younger Knicks team.

“Appropriate Fear,” already? Why not?

You hate to see a very good team lay an egg and stink it up against a team that you KNOW they should beat. The Spurs laid more than their share of eggs last season (including to these same Knickerbockers). Pop is constantly preaching appropriate fear to his players, and I think it’s fair to say it’s just as important in Game 1 of an 82-game regular season as it is in Game 7 of the NBA Finals.

The Knicks have been one of the worst teams in the league for years now, and while they did make some solid moves this off-season after striking out on big-name free agents, most pundits expect them to miss the playoffs once again this year, even in a much weaker Eastern Conference. It will be up to the Spurs to get off to a good start for the 2019-20 season and handle their work tonight against a team that they should beat, because the early schedule doesn’t get much easier when you play out West.

For the Knicks perspective, please visit Posting and Toasting.