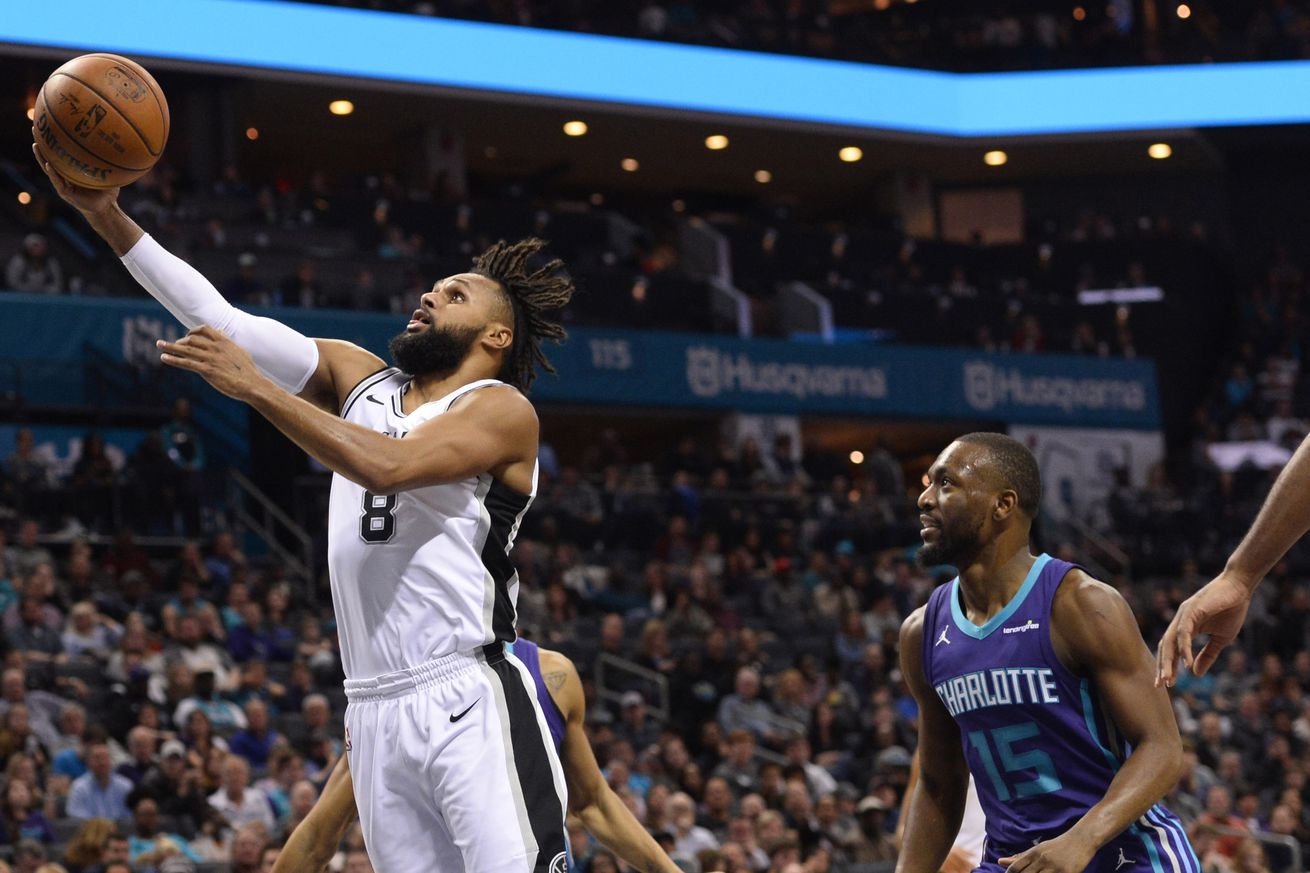 The Spurs will look to spoil a couple of returns Monday night.

Monday’s contest against the Charlotte Hornets should spell a victory. The Spurs are rolling and have only dropped one of eight games against Charlotte since their rebrand back to the Hornets moniker in 2015. This season, the Hornets are 2-11 against Western Conference opponents and are 5-15 in games on the road this season. Their roster is sorely lacking high-end talent outside of Kemba Walker

The contest does hold intrigue, however, if only because of one man. His jersey may say “Hornets,” but written on the hearts and the bootleg T-shirts of those watching in the stands, he’s a Spur for life. You might have heard of him . . . his name is Tony Parker.

Unlike the other members of the Spurs Mt. Rushmore, Parker chose not to retire with the silver and black. Instead, seeking a new challenge, he went along with former Spurs assistant and first-year Hornets head coach James Borrego to Charlotte to shore up their bench unit. But don’t get it twisted; this is worlds apart from the acrimonious Kawhi departure. Parker had played 17 years in San Antonio (almost half of his life) and his continuing role was unclear as Pop needed more minutes (rightly so) for Derrick White, Bryn Forbes, and (audible sigh) Dejounte Murray.

In Charlotte, he’s no slouch either. Even with the miles on his 36-year-old legs, his under-the-rim playing style lends itself to short, productive bursts. Parker’s per-36 minutes stats say as much: his points per game of 18.2 is his best in years, and a 7.4 assists per game total is the best of his career. Additionally, Parker was rested in the Hornets’ Saturday loss to the Sacramento Kings in order to make sure that he was fully revved for his return to the Alamo City.

The Key is Kemba

Though all eyes will be on the former Spur, the Hornets’ most potent threat is the man ahead of him in the depth chart. Star point guard Kemba Walker is already the best player in Charlotte’s collective franchise history. Averaging 20 points a game over seven seasons for a league afterthought will do that for you.

Though he may not have the same name-recognition as a Kyrie Irving or a Damian Lillard, Walker’s elite ball-handling and shot-making abilities put him on their level in the hypothetical point guard hierarchy. What’s more impressive is the workload that he carries for this team. He’s third in the league in field goals attempted and ninth in usage rate. As far as the Spurs gameplan goes, if DeRozan can break out of his mini-slump and match Walker’s production, San Antonio’s supporting cast should be able to pick up the rest.

Although the Spurs are a markedly better team than the Hornets on paper, there are a couple of factors that could make this a trap game. In addition to it being TP’s return, it’s also Coach Borrego’s first game against his former mentor, Pop. He’ll have something to prove and will definitely have his team in the right mindset for this one.

That being said, I can’t imagine the Hornets stopping the Spurs offense from rolling tomorrow night. LaMarcus Aldridge, Pau Gasol, and Jakob Poeltl should feast on the opposing frontcourt of Bismack Biyombo, Marvin Williams, and Willy Hernangomez. Altogether, after a nice tribute video and loving handshakes, the Spurs will show Tony that while his time here may be appreciated, life and basketball go on.