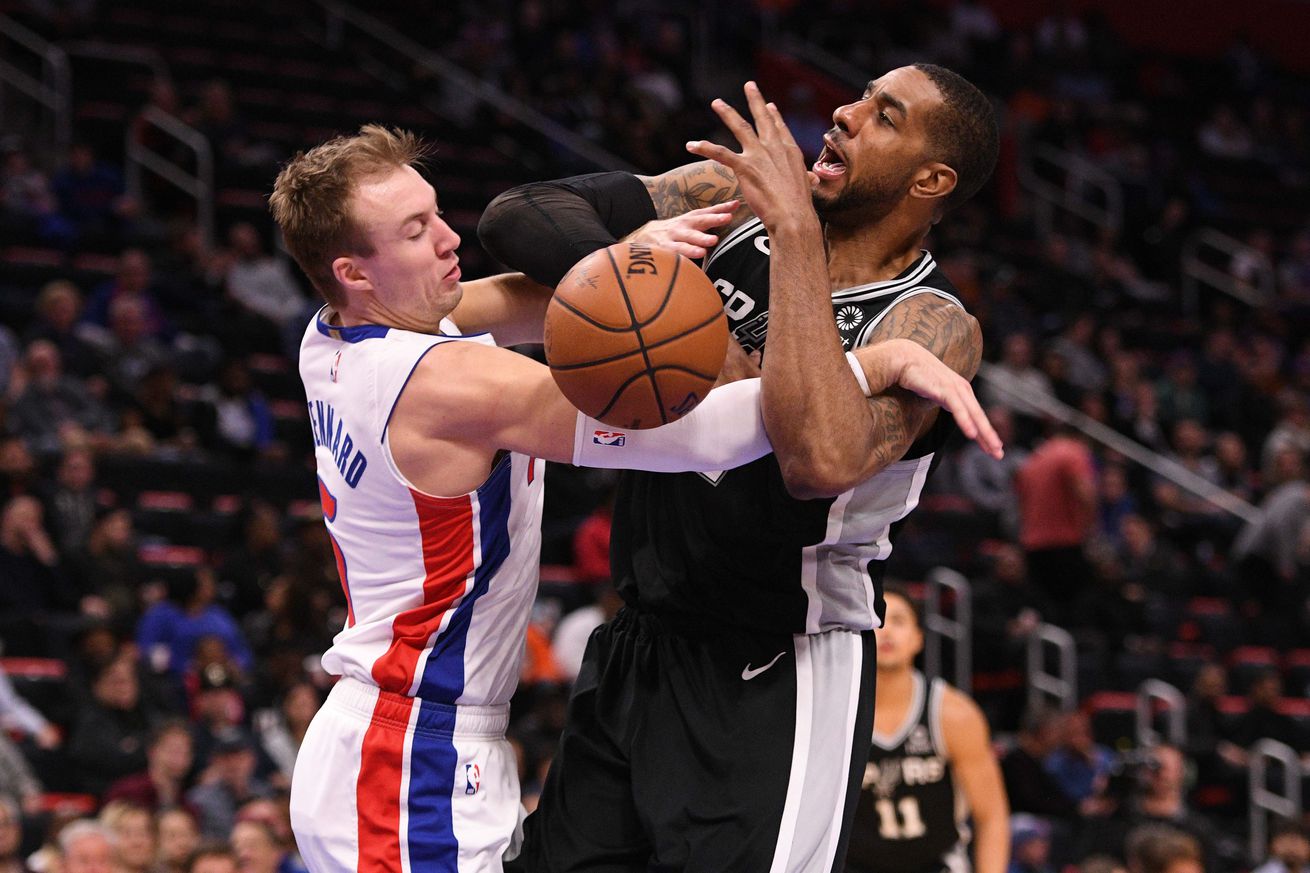 The Spurs return to the friendly confines of the AT&T Center after a disappointing Rodeo Road Trip and will look to salvage their season, starting with a game against the Detroit Pistons.

February has not been kind to the Spurs. A 2-7 record overall highlighted by a 1-7 Rodeo Road Trip (their worst mark since the 02-03 season when it became a tradition) has them in the 8th seed in a loaded Western Conference. Losses to the tanking Knicks and 1-point wins over a Memphis team that traded away one of their franchise cornerstones, a defense that is regaining it’s November form of Swiss cheese, and a minutes-restriction on Derrick White have not done a great deal to inspire confidence in this group moving forward.

Once considered a shoe-in for a playoff spot, with the possibility of even having home court in the first round, the Spurs return to the AT&T Center fighting for their playoff lives. Now home for a 3-game homestand, they’ll start with a team that has won 8 of their last 10 and is sitting in 7th themselves out East, the Dwayne Casey-led Detroit Pistons.

In their loss to the Nets, Pop inserted Davis Bertans into the starting line-up and had Rudy Gay come off the bench, which is a change from what we’ve become accustomed to seeing most of the season. I’m not entirely sure why Pop made the switch, seeing as Gay has been just as good as Bertans in February from beyond the arc (14/26, 54% as opposed to 15/35, 43%) and is a much more rangy defender than the Latvian Laser. Gay’s ability to post-up is also in line with how the Spurs run their offense (inside-out), but it’s possible he wanted to free up more of those opportunities for LaMarcus Aldridge and DeMar DeRozan.

Whatever the case, it’s something to watch for.

It’s not often that you see an NBA team play zone defense for long stretches of a game like you do in college. When you do see it, it’s usually mixed in with a good dosage of man to man, just to give the opposing team a different look defensively. Zone defense tends to help hide poor defensive players, and when they are exposed it puts their teammates in a better position to help guard them.

It’s no secret by now that the Spurs are a bad defensive team. They rank 24th in Defensive Rating, giving up 112.4 points per 100 possessions and are at a major disadvantage out on the perimeter with minus-defenders in Patty Mills, Marco Belinelli, Bryn Forbes, and DeMar DeRozan. While some of that comes down to effort (DeRozan typically dies on screens), these guys lack the tools to be great defenders and need guys around them to help minimize the damage. Mills and Forbes are undersized guards and Belinelli is just too slow to keep up with most perimeter players in the NBA. That’s why Pop was quoted as saying they really needed Derrick White to get back when he went out earlier this month with his foot injury.

All of this considered, it should be no surprise that they went to a zone once again early against the Nets and it’s not the first time we’ve seen them resort to it. CharlieOCharles wrote recently about the Spurs going to a triangle and two zone look in their loss to the Jazz on the Rodeo Road Trip. Here the Spurs play a basic 2-3 Zone and the Nets basically just swing the ball around the horn until they find someone wide open, which happens to be Allen Crabbe (39% on the year) for the short corner 3:

The pass to Rodions Kurucs causes DeRozan to leave his spot, even though Kurucs is only shooting 30% on the year from 3. The quick ball fake gives him just enough time to free up Crabbe who gets a wide open look.

Here’s another clear example of the 2-3 in action, this time ending in a miss.

Notice how Jakob Poeltl does not come out to chase Napier once DeRozan comes under the screen. He hedges a bit, just in case Napier is deciding to commit and go to the rim, but continues to play his spot in the zone. Even though Napier misses the shot, this is an example of DeMar’s lack of aggression defensively. He takes entirely too long to manuever this Jarrett Allen screen and doesn’t bother Napier’s shot whatsoever.

Zone defense can be effective in spurts, but I believe that the Spurs have too many players to hide defensively. It’s likely that a guy like Luke Kennard (38% from 3) will find his way to the corners and torch the Spurs off of any penetration, especially if they help off the wrong guys as DeMar does in the first example.

When they go away from the zone and guard the perimeter man to man, their guards are usually at a disadvantage. Look how easy this D’Angelo Russell jumper is over Patty Mills early in the 2nd quarter:

We can see it’s man because of how Poeltl is playing the pick and roll, ready to come up and contain the drive of Russell a bit should he get by Mills, but also ready to sink into the lane to limit Allen on the eventual roll. Russell calmly gets to his spot and drains a pull-up jumper right over Patty, who does his best to bother him, but just isn’t big enough.

Reggie Jackson hasn’t been as good as Russell has been all season, but he’s still shooting close to league average from 3 and has been known as a Spurs killer in the past. If young guys like Kevin Knox and Dennis Smith Jr. were able to light up the Spurs defense, I’m afraid to think of what a seasoned guard like Jackson will do.

As I stated earlier, Forbes, Mills and Belinelli just are not good defenders for a variety of reasons. What warrants their playing time is the pressure they put on opposing defenses with their ability to hit the long-ball, which means if they’re going to be out there, they have to make sure they hit open 3s like this one:

While the Mills shot is tough (it’s off the dribble), he still gets enough space that he should hit this, rather than hitting the front of the rim. Forbes gets wide-open, but misses left.

I’m not saying that these guys need to hit 100% of their shots. Nobody does that normally, but because they’ll be targeted on the defensive end, we need to see much better shooting performances than 2-14, 1-7, 2-5, etc.