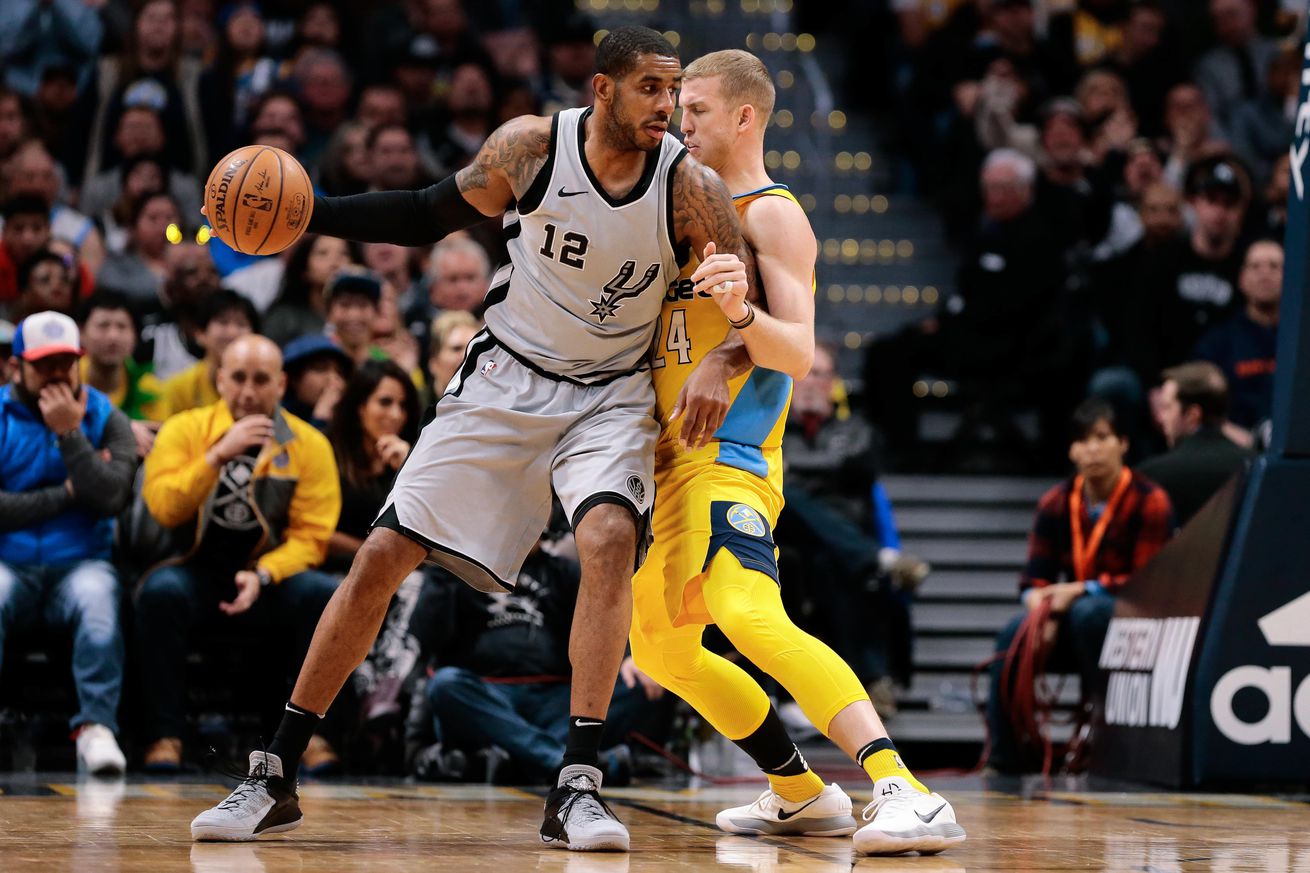 Full of Christmas dinner, the Spurs will look to take the first of two consecutive games against the West-leading Nuggets.

“The Redemption Tour,” was a moniker we’ve been running with going back to the Spurs’ most recent homestand. Since that time, they managed to beat most of the teams that had either given them a rough time in November or at least come close to doing so (the Bulls game notwithstanding). After a three-day Christmas break to be with their families, the Spurs will begin a “prove yourselves,” stretch, with home-and-away match-ups against the Western Conference-leading Denver Nuggets, a road game against the game LA Clippers, and then they go back home for games against the Boston Celtics and the Toronto Raptors, both contending teams in the East.

Denver Nuggets: Isaiah Thomas (OUT), Paul Millsap (OUT), Gary Harris (OUT), Will Barton (OUT)

The Denver Nuggets: Leaders of the Pack?

Surely no one thought the Nuggets would be as good as they have been this season, right? Even as good as they are, I bet some are looking at the West as a whole, as tight as its ever been, and are thinking that Denver’s 21-10 start to the season is, if not a fluke, certainly not sustainable. I would argue that the truth is somewhere in the middle. Denver has several good guards, a physical big man in Mason Plumlee, and a do-it-all star with the “the Joker,” Nikola Jokic.

The most impressive thing about Denver’s start to the season is the number of games that players have lost due to injury. That number currently sits at 139 games for Denver, 49 more games than the team with the 2nd most games missed due to injury (the defending champion Golden State Warriors). Denver has been without the services of defensive savant Paul Millsap and shooting guard Gary Harris for much of December. They also are lacking the scoring punch of 6th Man of the Year candidate Will Barton, not to mention Isaiah Thomas who will likely miss most of the rest of season, with Thomas having yet to suit up and Barton only playing 2 games so far.

Back to the boards

The game was there for the taking against the Rockets on Saturday night for the Spurs. After a horrible 3rd quarter that saw them give up 40 points for the first time in what feels like forever, the Spurs were able to fight back and even briefly lead in the 4th quarter.But the Spurs did a poor job on the defensive glass, allowing Houston to grab 2nd and 3rd opportunities. Fatigue might be to blame, as San Antonio just looked completely unable to fend off Rockets’ players from crashing the offensive glass to the tune of 19 offensive boards that led to 26 2nd chance points (NOTE: The Spurs lost by just 7. SEVEN!). With 3-days off, effort should not be something keeping the Spurs off the glass.

A Tale of Lumbering Styles

San Antonio has played at a methodical pace the last few seasons, and that hasn’t changed much this year either. The Spurs rank 25th in pace this season, with an emphasis on the post and working the shot clock in order to find the best shot possible. Right behind them is Denver, who rely on the passing acumen of big man extraordinaire Nikola Jokic out of the post to act as the hub of coach Mike Malone’s offense. Ball security and great shot selection will be key for the Spurs in their first of a home-and-away series against Denver this season.

The Spurs’ highest draft pick since Tim Duncan way back in 1997 has been working his way back with the Austin Spurs from a torn meniscus that he had surgery on before the season. For the first time since he started playing in Austin, Walker has been called up to the big leagues, along with Chimezie Metu, for today’s game. Walker has displayed complete tools to have a great offensive game and has expressed a desire to compete on the defensive end of the floor. Hopefully Pop can find some minutes for the young player.

Vegas Prediction: [to be updated]