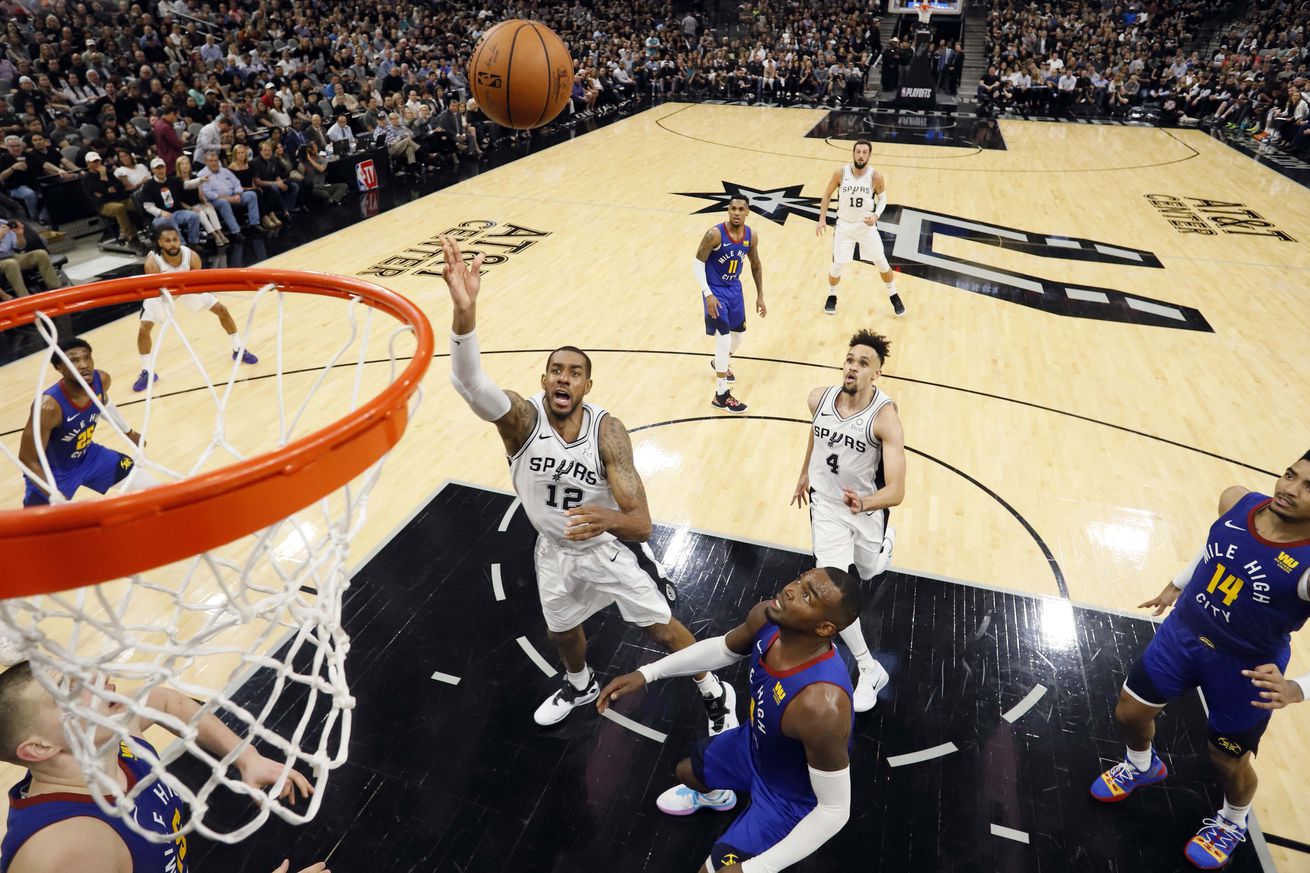 The Spurs will look to push Denver to the brink tonight in Game 4 from San Antonio.

Admit it, you were nervous on Thursday night after what happened in Game 2 of a series that continues to feel like a battle between two rugged fighters. You were nervous when, after ending on such a high note at the end of the 1st to lead Denver 31-22, the Spurs allowed the Nuggets to go on a 16-0 run in the first 3 minutes of the 2nd quarter, fielding a line-up of Patty Mills, DeMar DeRozan, Marco Belinelli, Rudy Gay, and Jakob Poeltl. Pop called two timeouts within about 2 minutes of each other, subbing in Derrick White for Mills and the Spurs were off and running again, taking a 61-58 lead at halftime after White made the AT&T Center his personal playground in the 2nd quarter with 16 points on 6/9 shooting.

Winning Game 3 has historically been a good sign for teams. The team that wins Game 3 73.5% of the time in a best of 7 series tied at 1-1 goes on to win the series. Surely, though, we know that has not always been the case for the Spurs, having won a Game 3 in a tied series in 2013 against the Miami Heat in the Finals, in 2015 against the LA Clippers, and in 2016 against the Oklahoma City Thunder, with San Antonio losing all 3 of those series.

With the breakout of Derrick White and the continued strong play of DeMar DeRozan and LaMarcus Aldridge and a quiet dominance within the confines of the AT&T Center, there’s a real chance that the Spurs will push Denver to the 3-1 brink tonight. Let’s hope that they can pull it off.

While Spurs’ fans have known for most of the season about the special guard from Colorado, this series has been a coming out party for Derrick White. His approach to the game is fascinating and was on full display in Game 3, as Nuggets coach Mike Malone even alluded to in his post-game presser. Feeling that he was at fault for Jamal Murray’s 21-point explosion in the 4th quarter of Game 2, White took it upon himself to hound him, limiting Murray to just 6 points on 6 shot attempts after he got up 9 shots in just the 4th quarter of Game 2 alone.

One play in particular during the second half illustrated just how much White was in Murray’s head:

If that wasn’t enough, he had a career-high 36 points in just his third start of his young playoff career. White’s 26 first half points put him in the same company as Spurs’ legends Tim Duncan and Tony Parker. Scoring on a variety of drives to the hoop and a diet of free throw line jumpers, White had the entire bag out for the whole world to see.

It’s been exciting to watch White do his thing this season. It’s been something completely different watching him do this on the highest stage, the NBA postseason. Hopefully he continues to show out throughout this series.

Jakob Poeltl needs to stay out of foul trouble

Poeltl played 30 minutes last night after logging just about 20 in that Game 2 collapse and he came up big for his team. Posting final lines of 10 points, 7 rebounds and 3 assists, Poeltl had the best plus/minus after the White/DeRozan/Aldridge trio doing his usual thing, which includes doing the little things on offense and playing tremendous defense. He spent much of the night guarding Nikola Jokic, making him work for everything that he ended up with, but also showed how competent he is when matched up against quick-footed guards.

Poeltl lifts a significant defensive load from LaMarcus Aldridge at that 5 spot. By matching up with the big Jokic, Aldridge is allowed to spend his time doing much less banging on the smaller Millsap and while he hasn’t shot the lights out yet in this series, he still seemed fresh at the end of Game 3. It will be important for Poeltl to continue to play this role while staying out of foul trouble going forward.

The trio of Mills, Belinelli, and Davis Bertans has been underwhelming

It has been a largely disappointing start to the NBA Playoffs for 3 guys that were huge for the Spurs most of the season and I think Gregg Popovich knows it. Patty Mills and Davis Bertans have seen their minutes decline in each of the first 3 games, while Belinelli saw a minute reduction in Game 3 after playing 22 minutes in Game 2.

All 3 of these guys, while able to do special things at times, need to be hitting their shots if they’re going to warrant minutes. Mills and Belinelli have two of the worst defensive ratings of anyone seeing regular time in this series for the Spurs, with Bryn Forbes (who often plays with both of them in super small backcourt lineups) being sandwiched in between the two of them. Davis Bertans, who only saw 5 minutes on Thursday, has no shot at matching up with the aggressive versatility of Paul Millsap.

Pop did a great job of making sure that one of White, DeRozan, and Aldridge was out on the court for most of the night. If he can keep TWO of them out there for a chunk of the game, they have an excellent shot at heading to Denver up 3-1.

DeMar DeRozan and LaMarcus Aldridge need to continue to be great

It may be tough for some people to remember, in the midst of a career night for Derrick White, that DeMar DeRozan and LaMarcus Aldridge were both spectacular for the Spurs in Game 3. DeRozan has shredded the “DeFrozen” moniker from his time in chilly Toronto, pacing the Spurs in the 3rd quarter with 19 points (63% of the Spurs’ 30 3rd quarter points) while Aldridge chipped in a double-double with 18 points, 11 rebounds, and 5 dimes to go along with his usual great defense.

The Spurs want nothing more than to close this series out Tuesday night in Denver. Another great game from DeRozan and Aldridge tonight should help ensure that they’re in position to do just that.