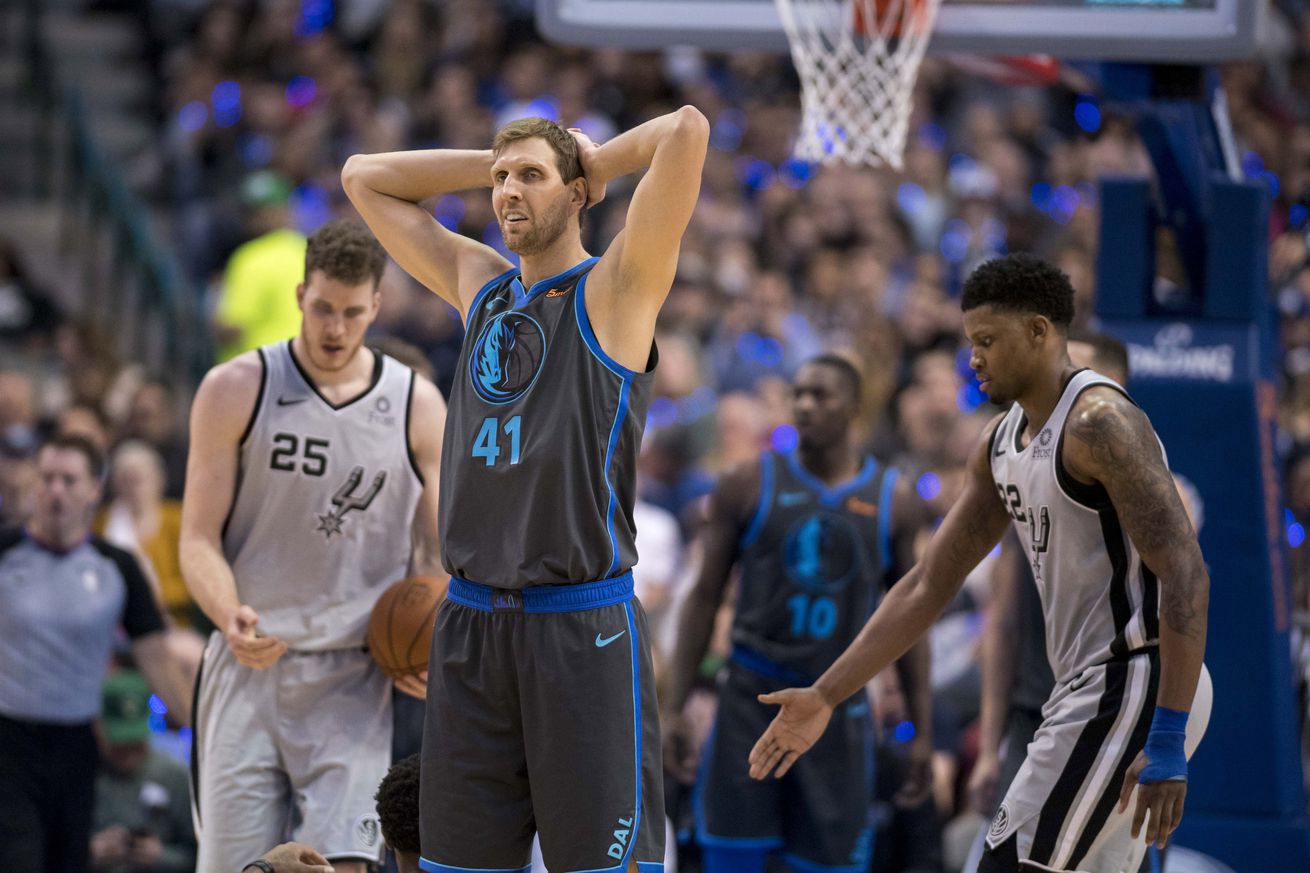 The Spurs will look to end the season strong with their 32nd home win in what may be the final game of an interstate rival and a once-feared opponent.

And just like that, it’s Game 82! What a wild ride this season has turned out to be for the Spurs. First came the quick start, in spite of preseason injuries to Dejounte Murray and Derrick White, that included some dramatic wins over the Lebron-led Lakers, then a tumultuous November that saw a new-look Spurs team playing 9 of its 15 games on the road (with predictable results, in hindsight) and early-season struggles for LaMarcus Aldridge. They had their season saved for the first time with a 6-game homestand that included another win over the Lakers, as well as W’s against the Utah Jazz and LA Clippers, but also included a head-scratching loss to the tanking Chicago Bulls. The home-and-away series at the end of the month with the Nuggets was a possible playoff preview.

January brought about the return of Danny Green and Kawhi Leonard, with DeMar DeRozan getting his career first triple-double against his former team before turning in the worst month of what has been an otherwise extraordinary debut season in Silver & Black. The annual Rodeo Road Trip was a 1-8 dud with a loss to the league-worst New York Knicks that left them at 34-29 and looking nothing like a playoff team.

In need of saving again, they ripped off 9 straight wins (including 5 against playoff teams) and even held the 5th spot in a loaded West for a night. Now sitting in 7th place with a playoff spot secured, San Antonio has one more task left before the postseason begins this weekend: Beat the Dallas Mavericks and Dirk Nowitzki, who announced his retirement after last night’s win against the Suns, for the final time on Fan Appreciation Night and avoid a date with the defending champs in Oakland this weekend.

The Mavericks, who are 32-48, have won just 9 games going back to the beginning of February. They are the 20th ranked offense and 18th ranked defense and they jack a bunch of 3s at a low percentage (4th in the league in attempts, 8th in makes, 26th in percentage). They are on a SEGABABA and their best player, Rookie of the Year candidate Luka Doncic has been dealing with a thigh contusion. Everything is set up for San Antonio to get a win tonight and avoid a repeat of 2015 when they lost to the Pelicans and ended up as the 6th seed rather than the 2nd.

There have been some head scratching losses and near-losses for the Spurs this year. Once, they could be counted upon to take care of business against the lesser teams, but the focus just has not been there at times throughout the year. They have losses to the Suns, Bulls, and Knicks on their resume to go along with multiple losses to the Heat, Hornets, Grizzlies, and Kings, all teams that will finish the year below .500. Some of these teams are among the worst in basketball.

The Spurs have yet to lose to the Mavericks this season, their most recent meeting coming during a 112-105 win in Dallas that saw them in control for most of the game before lackadaisical defense and timely shot-making by Dallas made it closer than it probably should have been. Derrick White, DeRozan, and Aldridge all had huge games that night, combining for 83 of the Spurs’ points.

You can be sure that Gregg Popovich has been preaching appropriate fear for most of the season. Hopefully they continue to show us what they’ve learned tonight.

Much has been made of the future Dirk Nowitzki, who is in the midst of his record-breaking 21st NBA season, and now it is official: this will be the final game of his career. Once one of the most feared scorers in the league, Nowitzki has spent much more time on the bench this year, averaging just 15 minutes a game and contributing just 7 points on 36% shooting, all career lows. He’s appeared in just 49 games, the least he’s played in since his rookie year which also happened to be the lock-out year in 1998-1999. He did, however, break out for a season-high 21 points in the Mavericks’ win over the Warriors at Oracle Arena just 2 weeks ago.

While Dwyane Wade has spent much of his “Last Dance” enjoying the moment and participating in jersey swaps with players on other teams, Nowitzki has, true to his nature, remained very coy until last night, where he announced his retirement to the only home crowd he has known.

Regardless, his teammates are surely aware that tonight will be the curtain call for one of the greatest players in the history of the NBA. While Dirk may not be feared as he once was (we STILL aren’t over, “The Foul”), the possibility of that sort of passion from his teammates is something that San Antonio will have to watch out for. They can’t sleep walk through this game and expect to come out with a win, even though Dallas has just 9 victories in 2 months.

Do your work early, get some rest, and send the fans home happy

Sunday’s blitzkrieg over the Cleveland Cavaliers saw just two Spurs play 30 minutes, DeMar DeRozan and Bryn Forbes. All in all, 13 players saw the floor at some point and only two failed to score a point. With a home game tonight and the playoffs starting on Sunday for the Spurs, they have a chance to spend likely 5 or 6 days in their own beds and getting treatment in their own facilities.

Because they are still trying to avoid the 8th seed, they can’t afford to just play their big guns 20 minutes and then shut them down, in effect “resting” them. That’s why it’s important that they come out tonight with focus and shut Dallas down early. A repeat of the Washington and Cleveland games can only benefit them heading into the weekend against their Round One opponent.