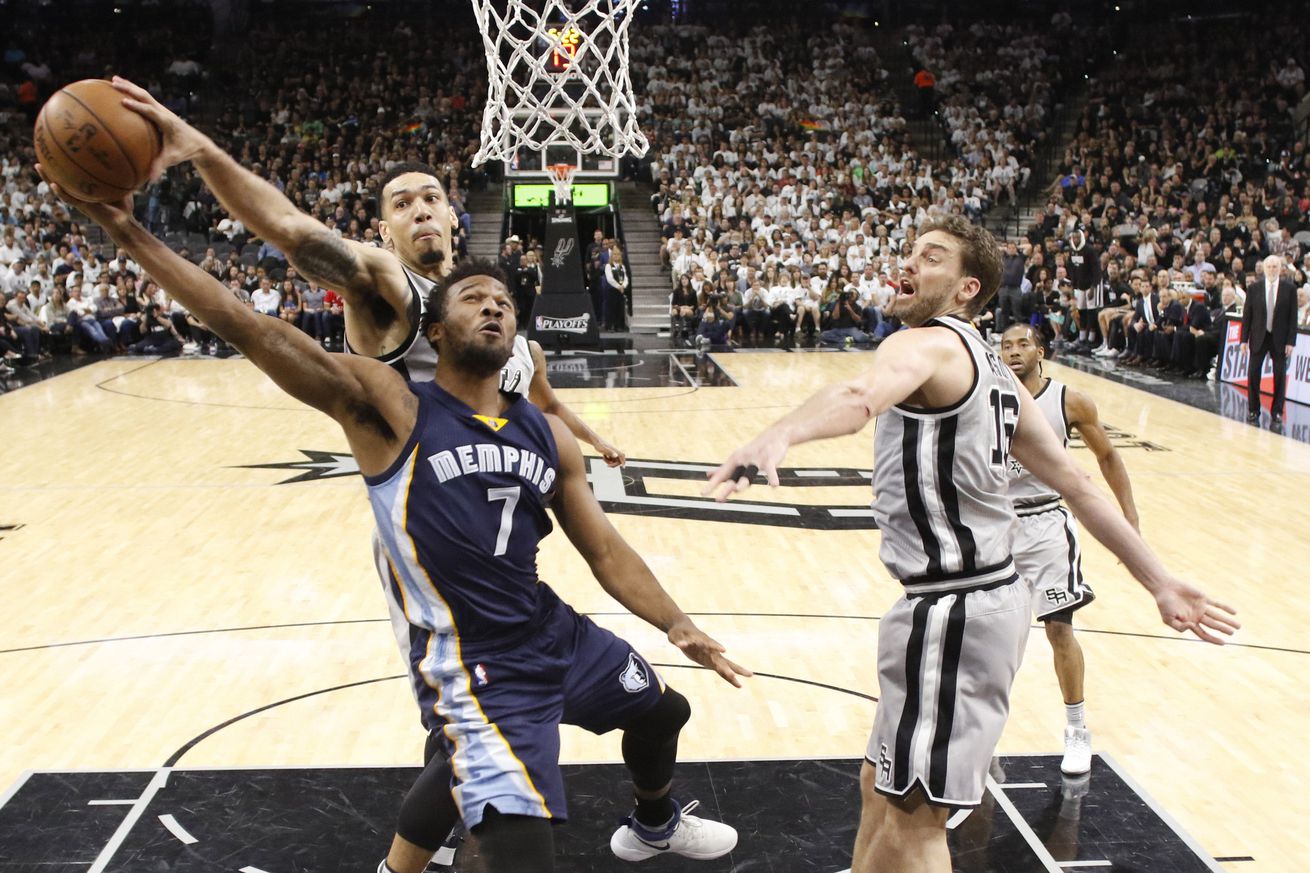 The Spurs will look to take a 2-0 series lead, while the Grizzlies have something to prove after getting blown out in Game 1.

A couple of things occurred to me as the holy triumvirate of Dewayne Dedmon, Jonathon Simmons and Kyle Anderson threw a fourth-quarter block party, swatting away Memphis’ attempts as the San Antonio bench put Game 1 to bed.

The first was that this Spurs team is deep in a way that could make a real difference in these playoffs. Rotations always get shortened in the postseason, and Pop himself can be obstinate with sticking to his veterans, but there are 11 or 12 guys that I can see having moments in the coming weeks or (hopefully) months. And they seem to have their coach’s trust more than teams of years past.

The second was that the Grizzlies would be doing whatever it takes to make sure Game 2 isn’t an encore of Game 1.

I don’t expect that to mean anything more than good-old-fashioned physicality from Memphis, but we have already seen that translate to one blow to Manu Ginobili’s head (courtesy of Zach Randolph, in the second quarter). Hopefully that’s the last extracurricular activity of this series.

Z-Bo may be more an issue for Memphis than San Antonio, though. The 35-year-old big man was a game-worst minus-39 in 26 minutes of action, hitting just 3 of his 13 attempts. The Spurs have often gotten the better of Randolph in the playoffs, but the Grizzlies still need him to provide offense off the bench as their default third option.

Expect the Grizzlies to come out tonight in a similar fashion as they did in Game 1. Even while overmatched from top to bottom, Marc Gasol and Mike Conley are brilliant enough to help them draw first blood. The question is whether or not they can sustain it for 48 minutes against a Spurs team that’s unfairly deep and looking as focused as ever on both ends of the floor.

After getting blown out on Saturday, Conley is mad and motivated (but mostly mad). He started out Game 1 as hot as anyone, hitting his first four shots and helping the Grizzlies build a 13-point lead, but finished 5-of-14. The Spurs, as Coach H adroitly pointed out, made stopping Conley a priority in the final three quarters. We’ll see if Dave Fizdale has a plan to get and keep his star point guard going for the entire game.

The Spurs’ backcourt shined in Game 1

Tony Parker and Danny Green have been lightning rods for (mostly undeserving) criticism for years now, but rabble has never been louder. Both guys answered on Saturday, with Tony dropping 18 efficient points and Danny putting up one of the more impressive defensive performances we’ll probably see in this postseason.

If you thought that Leonard’s points came easier than usual in Game 1, you’re right. The MVP candidate took full advantage of Tony Allen’s absence and settled much less for his usual diet of long twos, finishing a ridiculous 11-of-14 from the field to go with a perfect 9-of-9 from the line. Peep the shot chart below:

The Grizzlies are going to have to find a way to slow Kawhi down, and I think we’ll see them throw more double teams his way tonight.