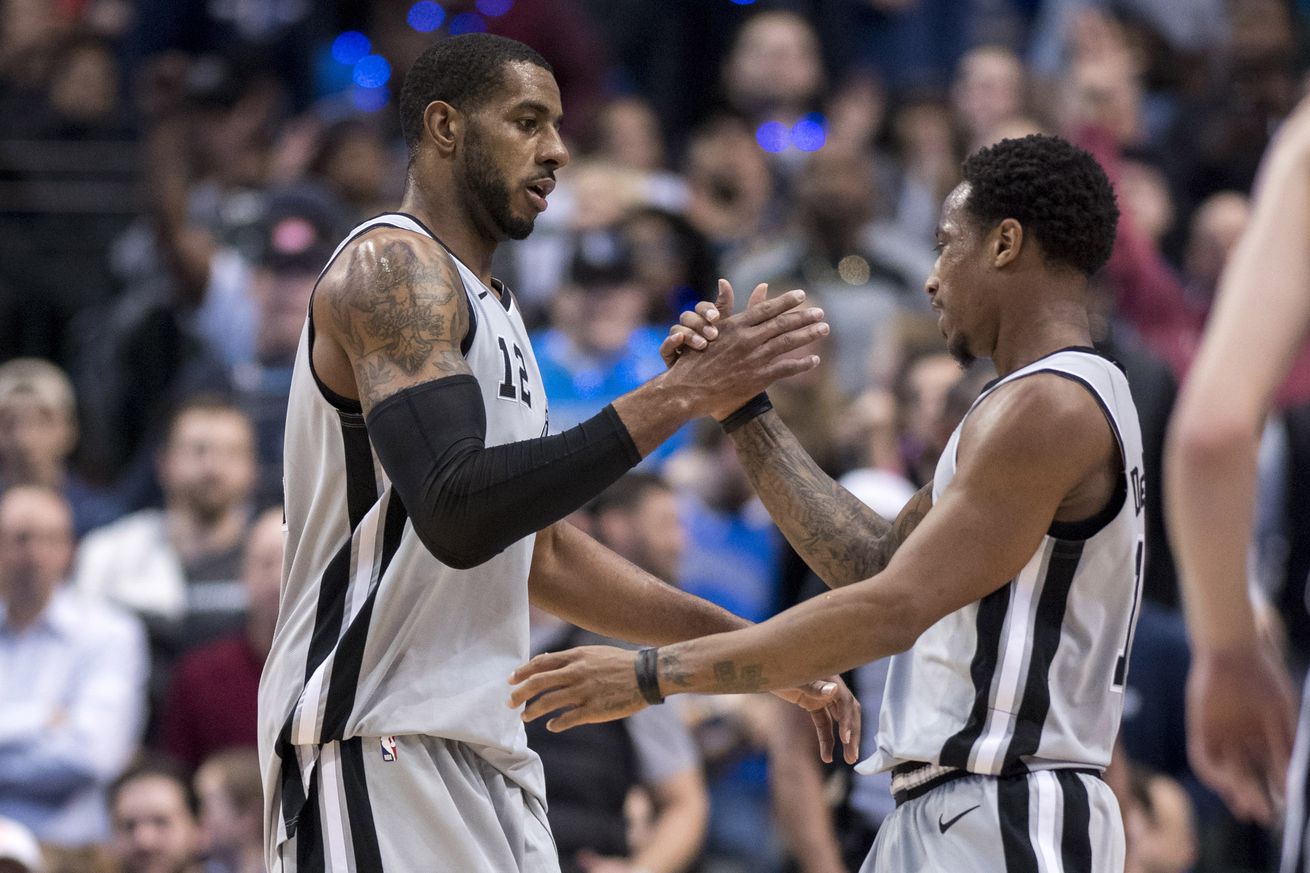 Hey, you can’t always be right…right?

All sports are unpredictable, which is why they represent the best of so-called “reality TV”. Some teams are more unpredictable than others. Just to pick a team at random — how about the 2018-2019 San Antonio Spurs?

The Spurs had more new players going into this season than at any time in recent memory, and even some of the returning players had seen little action last year. All of this is my way of trying to excuse several things about this season’s Spurs that I, and likely many others, got wrong. Here are the five that stand out the most.

1. The Spurs would be woeful on defense.

When Dejounte Murray was lost for the season because of his knee injury, that meant that the Spurs’ three best defensive players (Murray, Danny Green and Kawhi Leonard — each an All-Defensive teamer at some point in the prior two seasons) would not be playing for the Spurs this year. Without shot elite blockers inside and the best perimeter defenders gone, I thought the Spurs would be one of the worst defensive teams in the league. I was wrong.

While much of the credit rightfully goes to Gregg Popovich and his staff, I had forgotten one of the things I learned while coaching: the most important thing about playing defense is caring. When the players care about doing all they can to stop the other team from scoring, good things happen. Watch Spurs players such as Bryn Forbes, Patty Mills and Davis Bertans play defense. Even when over-matched, they compete. And the other players with more physical skills, such as Derrick White, Rudy Gay and LaMarcus Aldridge, also care and compete. Put it all together, and the Spurs defense halfway through the season has improved greatly and become much better than my preseason prediction.

2. DeMar DeRozan would be a one-trick pony.

I thought the Spurs newly acquired star would be someone who could really score, but would not add much else. I was wrong.

He is providing the points, but perhaps more important than anything, he has been an excellent facilitator, better than the star he replaced. I also expected him to live up (or down) to his reputation as a terrible defender. While he has not been as good on defense as the three perimeter defenders the Spurs lost, he has been much better than advertised.

3. The loss of Murray would doom the point guard position.

I assumed that Forbes and Mills would man the spot, which would not be a good thing. It would both take them away from what they do best (shoot the ball) and force them to defend the many outstanding point guards in the league. I was wrong.

I never expected White — who played mostly in Austin last season and could barely get off the bench when he was with the Spurs — to be as good as he has been, both on offense and defense. Many nights, he has been the Spurs’ second or third best player, normally defending the best perimeter player on the opposing team and running the offense smoothly. Another great end-of-the-first-round pick by the boys upstairs.

4. Jakob Poeltl would ride the bench.

I thought “the other player the Spurs acquired in their blockbuster trade” would spend the season on the bench, only playing when Aldridge or Pau Gasol were out with injuries or for rest. I was wrong.

Gasol’s early-season foot injury gave Poetl his chance to play significant minutes, and he made the most of it with outstanding play that has since cemented his role in the rotation and stolen almost all of Gasol’s minutes (when Pop’s preferred starting line-up is healthy). And just as with DeRozan and White, Poetl’s surprisingly strong defense has contributed to the team’s better-than-expected defensive performance.

5. The Beautiful Game would be gone forever.

Finally, I thought the loss of Tony Parker and especially Manu Ginobili, along with the offensive focus shifting to mid-range masters DeRozan and Aldridge, would mean that the Spurs’ Beautiful Game was lost forever. While the starting unit remains a completely different animal than the Beautiful Game Spurs of yore, the second unit plays a style (and foreign flair!) we remember. With Poetl or Gasol playing the post, and Mills, Forbes, Bertans and Marco Belinelli on the floor, the ball flies from side to side, and players constantly move, back-cutting and curling and flaring. Three pointers and back-cuts are abound.

The Beautiful Game still lives, and I am very happy to have been wrong about that.