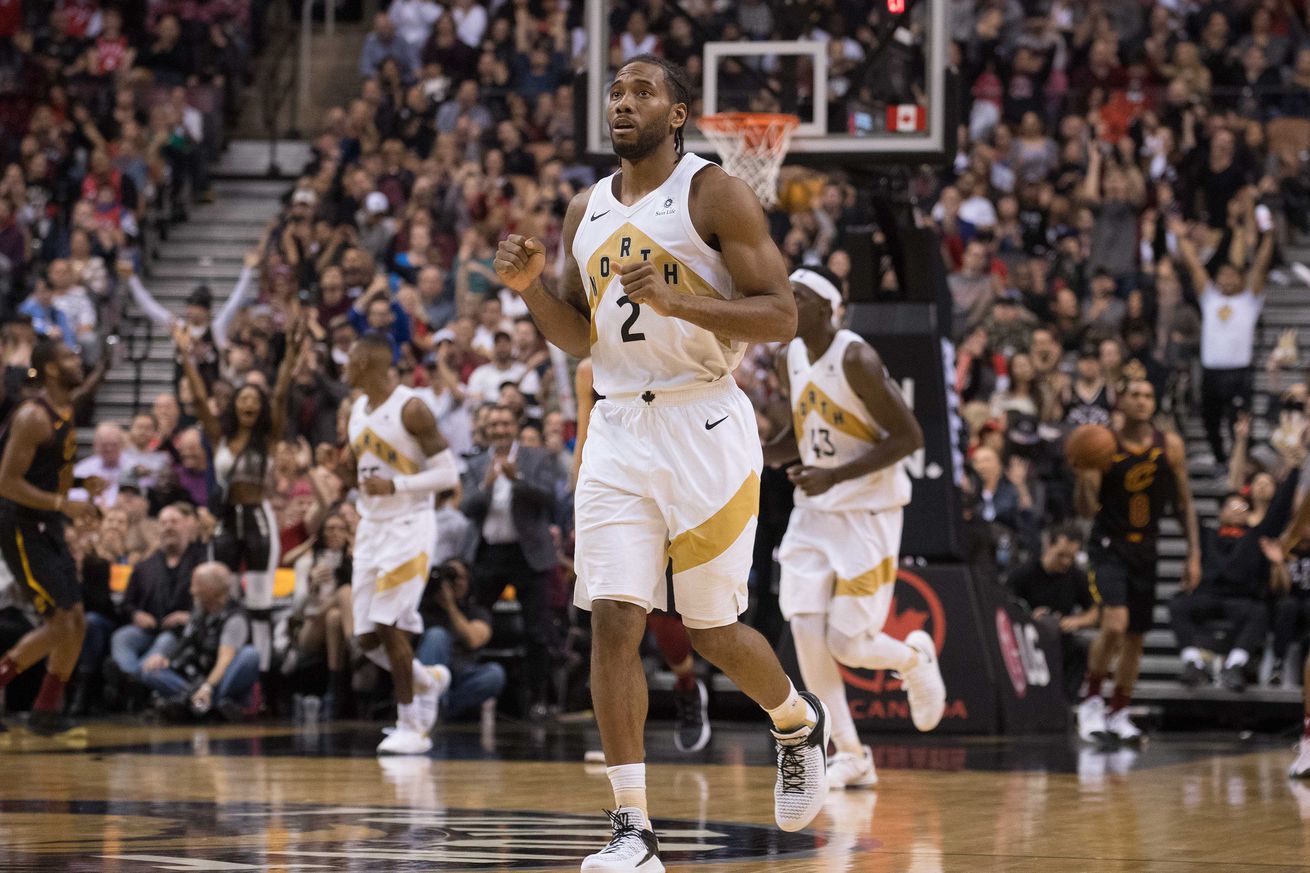 It’s a special edition of the PtR round-table, as the staff takes a deep dive into the return of The Nephew.

Kawhi Leonard returns to San Antonio on Thursday for the first time since demanding a trade this past summer. Danny Green will make his first appearance at the AT&T Center as a member of another team after eight seasons as a Spurs. After the events of the summer, this is one of the most anticipated games of the regular season.

Both Leonard and Gregg Popovich have been nothing but respectful when discussing the situation, both at the time and this week in the lead up to the matchup. The protagonists are trying to play it cool, even if the media and the Spurs’ faithful can be expected to let loose some.

The PtR staff thought it would be a good idea to sound off on some of the most intriguing questions about Leonard’s return in a special edition of our round table discussion, In The Bonus. We invite readers to do the same in the comments.

1 – Did you have this date marked down on your calendar or is it mostly just another game for you?

Marilyn Dubinski: I’d be lying if I said I hadn’t eyed it at the beginning of the season and checked every now and then to confirm when it would take place. That being said, I hope the players treat it like just another game — although I will be shocked DeMar DeRozan doesn’t come out blazing hot and wanting to make a statement to the team he feels betrayed by.

Mark Barrington: It’s an important game for this season and the Spurs. They’re playing the best team in the eastern conference and it’s an important measuring stick to know if they can continue their recent run of solid play against good teams.

Jesus Gomez: I looked for the date of Kawhi’s return when the schedule was released. Then I was always aware of it, because I wanted to brace myself for the coverage it might get. But I have to admit that recently it kind of slipped my mind, likely because the Spurs started to play well.

Bruno Passos: You could say it’s not a coincidence that I made sure to get back from my Christmas trip on Wednesday (Hello from O’Hare, by the way). I wanted to be in the building on the chance Kawhi suited up to see firsthand what his reception will be like.

J.R. Wilco: I didn’t just mark the date down; I bought a calendar specifically for the occasion, cut the date out, framed it, and currently have it hanging over my workspace above my copy of Tim Duncan: Team First Superstar and next to one of my wife’s drawings of Manu Ginobili. In short: no, it’s not just another game.

2 – Have you paid attention at all to how Kawhi Leonard and Danny Green have been doing in Toronto?

Dubinski: Not really. I’ve been so entrenched in keeping track of the ridiculously tight West that I tend to look past East box scores. From what little I’ve heard, Kawhi’s MVP form has returned when he plays, but Raptors fans are somewhat confounded that they have a good record when he doesn’t play (it’s called depth). It also sounds like Danny’s shot is rejuvenated, which is great for him but makes me even sadder that he had to be included in that trade.

Barrington: Somewhat. I’m happy that Danny looks healthy now and he’s having is best season in a couple of years. Kawhi looks like he’s improved his handle and he’s even more dangerous than before.

Passos: Raptors games tip off at a friendly time for me, so I’ve found myself catching their games more often than not, both to check in on the two ex-Spurs and just to watch one of the more entertaining teams in the league. They’re stacked with fun guys, with Pascal Siakam among my favorite watches, but it’s also been interesting to just see Kawhi and Danny do the same thing we’ve seen them to do for years (well, minus last season for one of them) but in different colors.

Wilco: I have. I expected nothing less from Kawhi, and I’m happy for Danny.

3 – What would be the ideal fan response to Kawhi’s return in your eyes? (boos, silence, applause, etc)

Dubinski: It won’t happen, but I’ve always been on either the silence or “courteous” applause bandwagon (but not necessarily standing ovation). He deserves our thanks for extending our championship window and helping get that elusive fifth one here. I also don’t like the idea of booing because it will look petty to outsiders, feed the media’s narrative that Kawhi was right to get away from San Antonio (they have already taken his side of the story anyway), and just give him more fuel for this particular game. Why make him even more motivated to win than he likely already is? If anything, make him feel awkward.

Barrington: I don’t know if it matters what I think, because he’s going to be booed loudly when he’s introduced, and that will drown out all other responses. I think eventually he will just be another superstar player, but Spurs fans aren’t going to forget how he abandoned the team any time soon. If it were me, I’d just politely clap and move on, but most Spurs fans aren’t there yet, as far as I can tell.

Gomez: I don’t really care what the response is, to be honest. I’m assuming fans are going to boo, which is fine by me, I guess. I certainly understand the motivation behind it. Sure, some outsiders will say that they are being ungrateful to a guy that contributed so much to a championship, but no one can really blame the crowd for that reaction after how things ended.

Passos: I’m pretty excited about being there for the reception — whatever it’ll be — although I do think booing typically brings out a worse side of people, and doing so won’t assuage the grudge fans have been harboring against him anyway. An ideal realistic scenario, I guess, would be people jeering their lungs out but without stooping to the absolute lows that fans are sometimes capable of.

Wilco: My ideal reaction would be utter silence, but not just because my father raised me in the “kill ‘em with kindness” mode. First, I don’t want to make it easy for him. Elite athletes are exceptionally good at channeling negative energy into a positive direction, and I’d rather that he have to come up with all of his own momentum for tonight without being able to ride a wave of San Antonio ire. Second, I simply love the idea of an eerie, uncomfortable silence hanging in the air both before and after his introduction, and every time he touches the ball. That simply never happens at sporting events, and it would be wild to have the crowd noise dip to nothing whenever he makes a basket or draws a foul. The way he left was so unusual, that it would be so fitting to have an unusual reception prepared for his return. (That said, he’ll absolutely be booed.)

4 – Do you think we’ll ever find out what actually happened between Kawhi and the Spurs?

Dubinski: Nope. If the Spurs were going to tell-all they would have done it by now considering the media has been trying to drag their reputation through the mud since May. Kawhi will probably never speak of it, and of course Uncle Dennis will never tell the truth. Heck, he exploded when little leaks like his desire to use Kawhi to start a LeBron-style marketing company or the NY hide-and-seek came out despite all the lying he did about the Spurs.

Barrington: Never. Pop will take this to his grave.

Gomez: I hope so. I don’t expect it to happen now, though. I expect everyone to be nice and on script for the first matchup. I’d really like to know exactly what went down at some point, but I’m losing hope that will ever happen.

Passos: I feel like we’ve heard the broad strokes already, between the disagreements over the diagnosis and what was likely a general desire for a change of scenery. The missing ingredient for me is whether one event really pushed him towards that turning point, and my hunch is we’ll not learn what that was.

Wilco: It’s possible that the truth will eventually come out, but not until long after Pop and Kawhi have retired, once Gregg and I have been able to collaborate on his tell-all memoir to be published 21 days (h/t to Timmy) after his death.

5 – Assuming he never returns to the Spurs, should Kawhi have his jersey retired in San Antonio when he calls it a career?

Dubinski: No. He didn’t do enough over seven seasons to warrant it. Finals MVP is great —although while definitely deserved, that championship will always be more remembered for the team effort — but before that he was a role player, and while nearly an MVP three seasons later, nothing significant was accomplished with him as the head honcho before he missed all but nine games last season. For the bow on top, the break-up was too dirty with all the reputation-smearing he did of the franchise, so he will just go quietly into the night as the guy who played a big role in the last championship of the Big 3 era, but he won’t be joining them in the rafters.

Barrington: Nope, when a player gets their jersey retired, it means that they made a pivotal contribution to the franchise over a number of years. He was the best player for a couple of years and contributed greatly to the 2014 championship, but then he flaked out. A couple of years of great work aren’t enough, especially when he displayed the opposite of leadership and teamwork in his final season with the team.

Gomez: I’m leaning towards no. Unless he suffers a career-ending injury Kawhi is going to be one of the best players to ever wear the Silver and Black, clearly more talented that some others who have their jersey hanging from the rafters. At the same time, he’ll likely spend most of his prime elsewhere after having only two MVP-level seasons in San Antonio. It doesn’t feel like enough, but maybe the memories of his troubled exit was are clouding my judgment and in a few years the case for retiring his jersey will be easier for me to make.

Passos: This is presuming this Reddit theory about he and the Spurs actually finessing the entire league is untrue, right? The statistical case for him is absolutely there, especially when you look at the other jerseys hanging up at the AT&T Center. The way I see it, he was a big part of one of the most joyous Spurs seasons ever and that, combined with his other achievements (two DPOYs, two top-three finishes in MVP voting, top-five in a handful of all-time franchise stats, plus the 2014 Finals MVP), makes him worthy, and I wouldn’t mind his Spurs legacy being forged with those many highs in mind.

Wilco: Under no circumstances should his jersey ever grace the AT&T Center if last season’s 9 games were his last played in it.