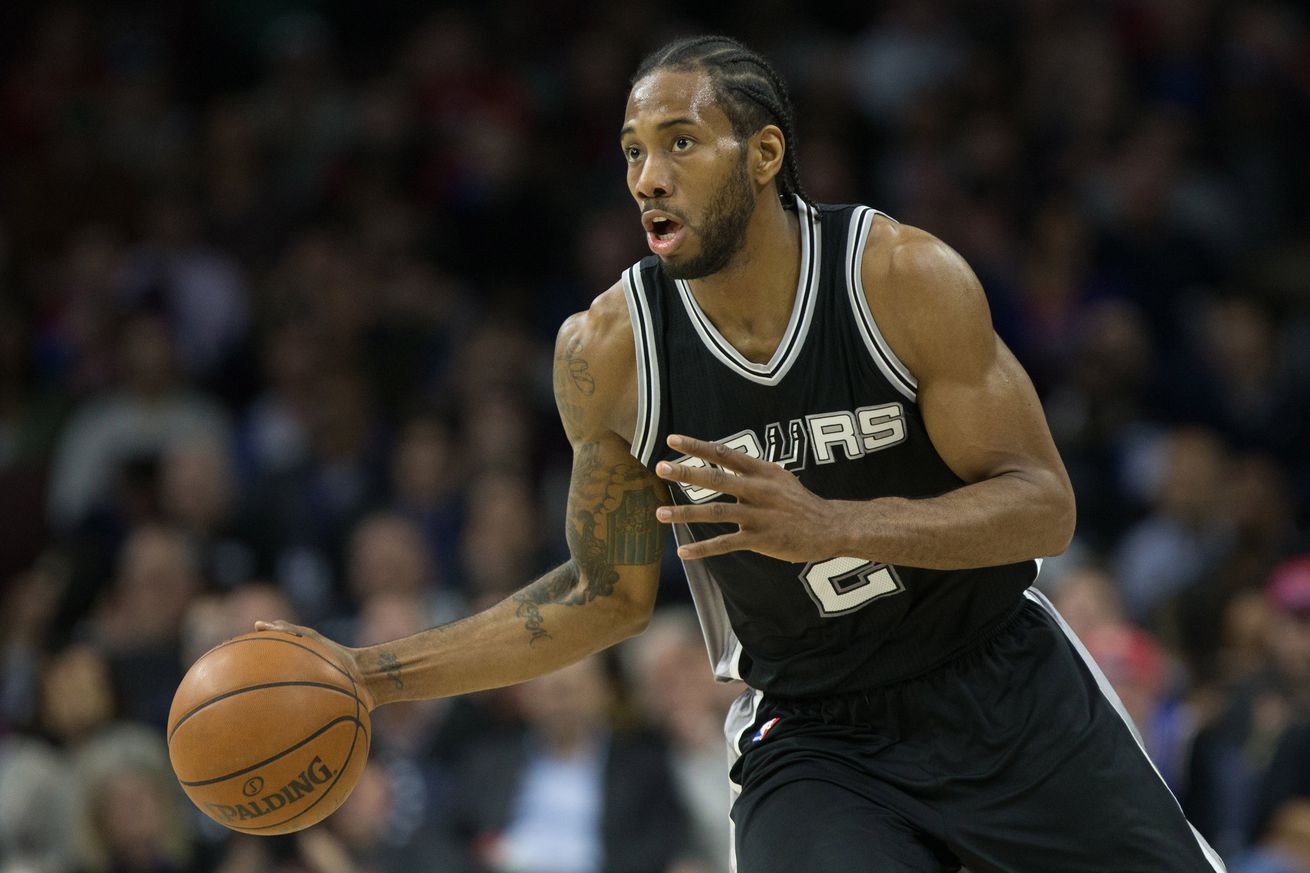 The Spurs rode a hot-shooting first half and another big night from Kawhi Leonard to a win against the shorthanded 76ers.

Just six days ago in San Antonio, the Spurs beat the 76ers without their best player 102-86 in after a dominant second half. Tonight, the Spurs were faced with trying to keep from digging themselves into an 0-2 hole to start the annual Rodeo Road Trip. Like last week, Philadelphia’s star rookie Joel Embiid was out, so Spurs fans will have to wait to go head to head against the player some have compared to a young Tim Duncan. Kawhi Leonard missed Monday’s road trip opener with a thigh contusion, but he was back in the starting lineup tonight for the Spurs.

Starters for both sides were:

This game got off to a sluggish start, which is a familiar feeling lately. It was nice to see Aldridge make his fitst shot (after his 4-19 shooting performance in Monday’s loss to Memphis) even if it was a fadeaway jumper. After a few minutes the game really began to open up and both teams played at a pretty entertaining pace. Tony Parker looked quick and energized in his 6 first quarter minutes, scoring 6 points on 3-3 shooting. Kawhi played 9 minutes before scoring his first points on a nifty baseline jumper and a contested triple two possessions later. San Antonio’s defense forced Philly to miss 10 of their first 13 shots, but the home team kept it close by making four of their last six. 8 different Spurs scored in the opening period en route to a 29-23 lead for the silver and black.

Dewayne with the early dunk in Philly pic.twitter.com/mybjLT6nzv

The up-and-down pace continued into the second quarter, with the ball frequently swishing through the net for both sides. The Sixers were able to keep it fairly close through the first 6:00 with an advantage at the free throw line, a few second chance points, and by winning the turnover battle. But then Leonard decided to take over the game, and he nailed two threes, a jump hook, a dunk, and a couple of free throws. Still, like last week, Philadelphia wouldn’t go away quietly. After the Spurs built a 13 point lead, Nik Stauskas hit a pair of threes late in the half to keep the Sixers in the game for a 58-51 halftime score. The 76ers led 15-0 in points of turnovers for the half.

Notable second quarter stat: Kawhi Leonard scored 12 points in the quarter, giving him 17 for the half.

The second half picked up where the first left off, with both teams knocking down shots. Leonard racked up 7 more points quickly, but the game became sloppy by the midpoint of the quarter. The Sixers were the more aggressive team for the majority of the period, and it showed on the scoreboard as they closed to within four. A huge sequence occurred at the end of the quarter when Manu Ginobili snuck behind Nerlens Noel and ties him up. On the jump ball, Ginobili batted it to Davis Bertans, who nailed a deep three with a second left to extend the Spurs’ lead to 82-75.

Notable third quarter stat: The Spurs allowed only two points off of turnovers in the period, despite turning it over 5 times.

The Spurs’ inability to deliver the knockout punch looked like it might come back to haunt them as the Sixers closed to within 3 on an off-balance prayer of a three from Gerald Henderson. Danny Green had one of the best blocks of the season — by a Spur not named Jonathon Simmons — on Okafor, and the Spurs pulled away on the strength of better defense and Kawhi Leonard’s 32 points on 18 shots (11-11 FTA). The final score was San Antonio 111, Philadelphia 103.

Notable fourth quarter stat: 100%. That’s the Spurs free throw percentage in the final period. A welcome sight after poor performances from the stripe the past few games.

Up next for the Spurs: the Rodeo Road Trip continues in Detroit on Friday, and you all know what that means: BOBAN.