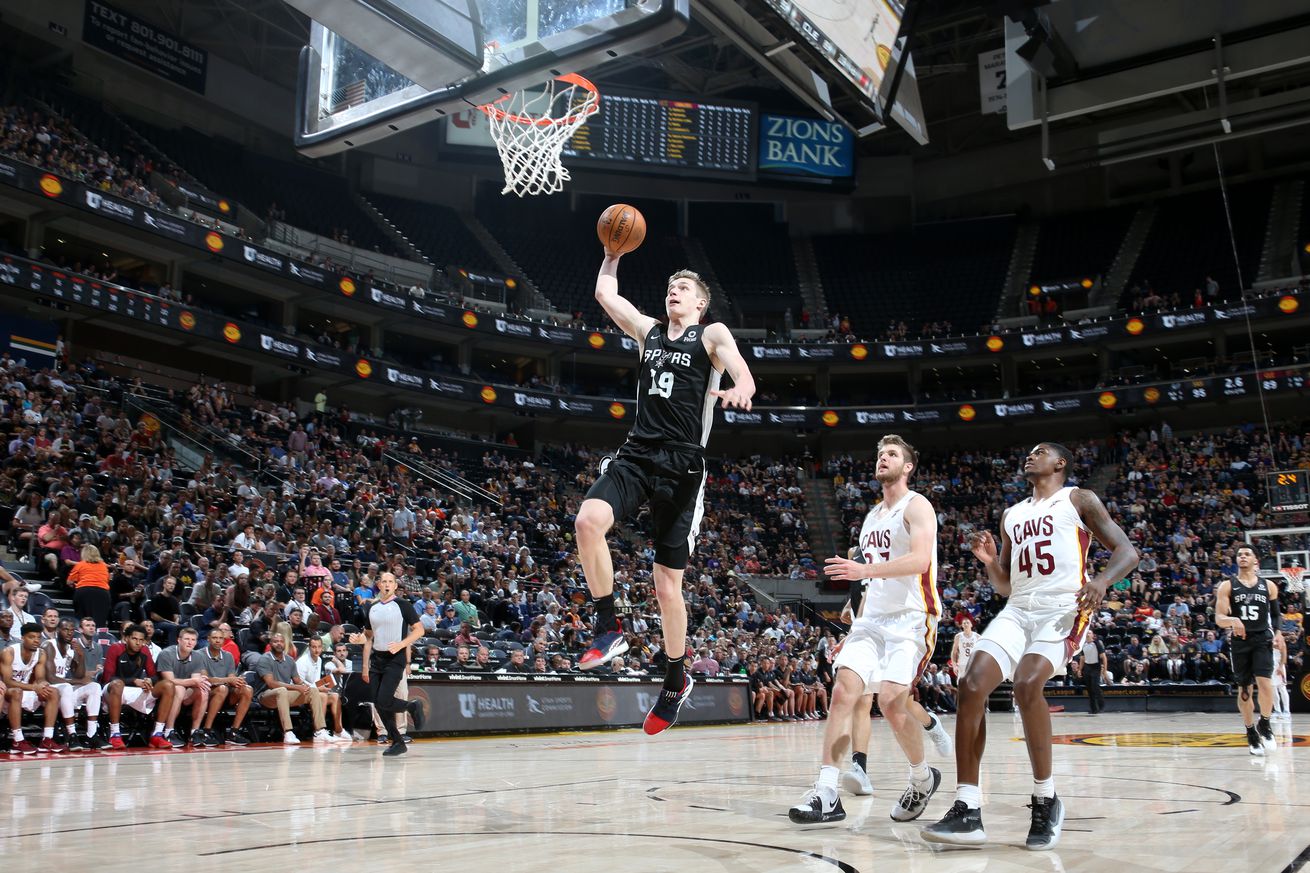 If he can become a solid NBA defender and hone his offensive skills, Luka could be the Spurs’ PF of the future.

The Spurs appear ready to break a 14-year streak of delayed gratification and, all too often, futility with their young Croatian project this season. Luka Samanic will become the team’s first overseas draft pick to suit up for the Silver and Black right away since Beno Udrih in 2004. That streak of draft-and-stashes and missed opportunities includes 10 picks, 4 of which were first rounders and 3 which were immediately traded away.

The legacy of so many errant gambles may seem relevant to the conversation surrounding the youngest Spur, but in truth, he has little in common with most of those players, aside from not coming out of the American collegiate system. Luka is more skilled, with a higher upside at a younger age than any foreign prospect the team has drafted since Tony Parker

At 6’11”, Luka has the physical tools and burgeoning skill sets to answer a question few have ever bothered to consider: what if Jonas Jerebko could run the pick-and-roll? That falls a little short, perhaps, of the visions evoked by referring to him as the Croatian Kevin Durant, but it won’t be the first time a player’s nickname outstripped his abilities (looking at you, Juice).

Still, despite his high potential, Luka has a lot of work ahead of him to even crack a rotation and will likely spend the vast majority of his rookie year playing in Austin, adapting to the rigors of professional basketball at the highest level. He isn’t nearly strong enough to hold up against NBA bigs and hasn’t played anything close to an 82-game season before. This will primarily be a year of adaptation, focusing on foundational aspects of his game, with much of the improvement coming in areas that are hard to quantify.

But he will also play a fair amount of basketball. Lonnie Walker IV, for instance, played a little over 900 minutes spread out over 46 games between the G-League and NBA last year despite missing the first month of the season recovering from a torn meniscus. It’s reasonable to expect a similar workload for Luka, meaning that, for the most part, his development will take place away from the spotlight.

Aside from adopting a more rigorous strength and conditioning program, the most obvious place for the young big man to begin his work is on being an NBA-level big, at least on the defensive end. He got bullied quite a bit in Summer League, but his balance and positioning aren’t bad, and his frame suggests he should be able to put on the muscle he needs to at least hold his own in the post and on the boards.

He’ll also have the good fortune of honing those skills under one of the best to ever do it since Big Fun is back on board. That will be especially important for Luka considering whether he can credibly defend his position is the single biggest question mark about his game, and the answer to that question will go a long way towards determining his ceiling.

His lateral quickness and agility are impressive for his size, meaning he’ll be difficult to target by drawing switches on the perimeter and should develop into an effective defender on both sides of the pick and roll. His wingspan is relatively small at just 6’10.5”, but he has more than enough explosion to impact shots around the rim. He doesn’t yet have the discipline to be a consistently good team defender, but he showed promise as a helper and on double teams. If Luka can survive against teams that play two bigs, he’s going to give the Spurs a lot of match-up flexibility: something they’ve missed the last two years.

That being said, he wasn’t drafted for his defensive chops. The Spurs took him earlier than anyone expected because of how he plays on the other end of the floor. He looks like a wing with the ball in his hands. He’s comfortable on the move in space with defenders all around him and teammates streaking up floor.

There just aren’t a lot of folks his size who have that kind of coordination and skill. His ball handling was especially impressive in Summer League, as he repeatedly created separation in one-on-one situations.

Luka’s passing ability was a pleasant surprise, too. While he didn’t rack up a lot of assists, with 13 in his 120 minutes of playing time, the quality of those assists was eye-opening.

He didn’t present enough of an outside threat to stretch the defense at Summer League, but that part of his game should be coming soon. He’s a confident shooter with good form and no obvious mechanical issues that would prevent him from reaching that point in the near future. He may never be the second coming of Davis Bertans, but with all his other skills, he doesn’t need to be.

While it’s not a good idea to read too much into Summer League play, the fact that Luka very clearly belonged despite being one of the youngest players in attendance is a good sign. There’s no guarantee that the skills he showed will translate to the NBA, but there’s already enough evidence to be optimistic about his ability to continue growing and improving.

Just as important as his potential and upside is the fact that Luka should develop into an excellent complementary piece alongside the rest of the Spurs’ young core. He’ll fit right in playing the 4 next to Jakob Poeltl, giving the Spurs a playmaking big who doesn’t take away from what their Austrian center excels at. As long as we’re imagining things, he’d also look perfectly at home with some combination of Dejounte Murray, Derrick White, Walker, and Keldon Johnson filling out the rest of the lineup.

While none of those players has shown the ability to lead a playoff team yet, much less a contender, there’s reason to hope that with so much young talent, someone will. Derrick is the oldest player in the group at just 25, so if that were to work out, the Spurs could be looking at an unparalleled streak of continuity, even for a franchise long known for valuing stability over almost anything else.

That’s obviously staring a little too deeply into the crystal ball (for now), but it’s an intriguing thought. Luka has a lot of work to do and a long way to go before he can stake his claim as the Spurs’ power forward of the future, but the potential is definitely there.

Examining Luka Samanic’s fit with the Spurs of 2021 and beyond
Source: Pounding The Rock