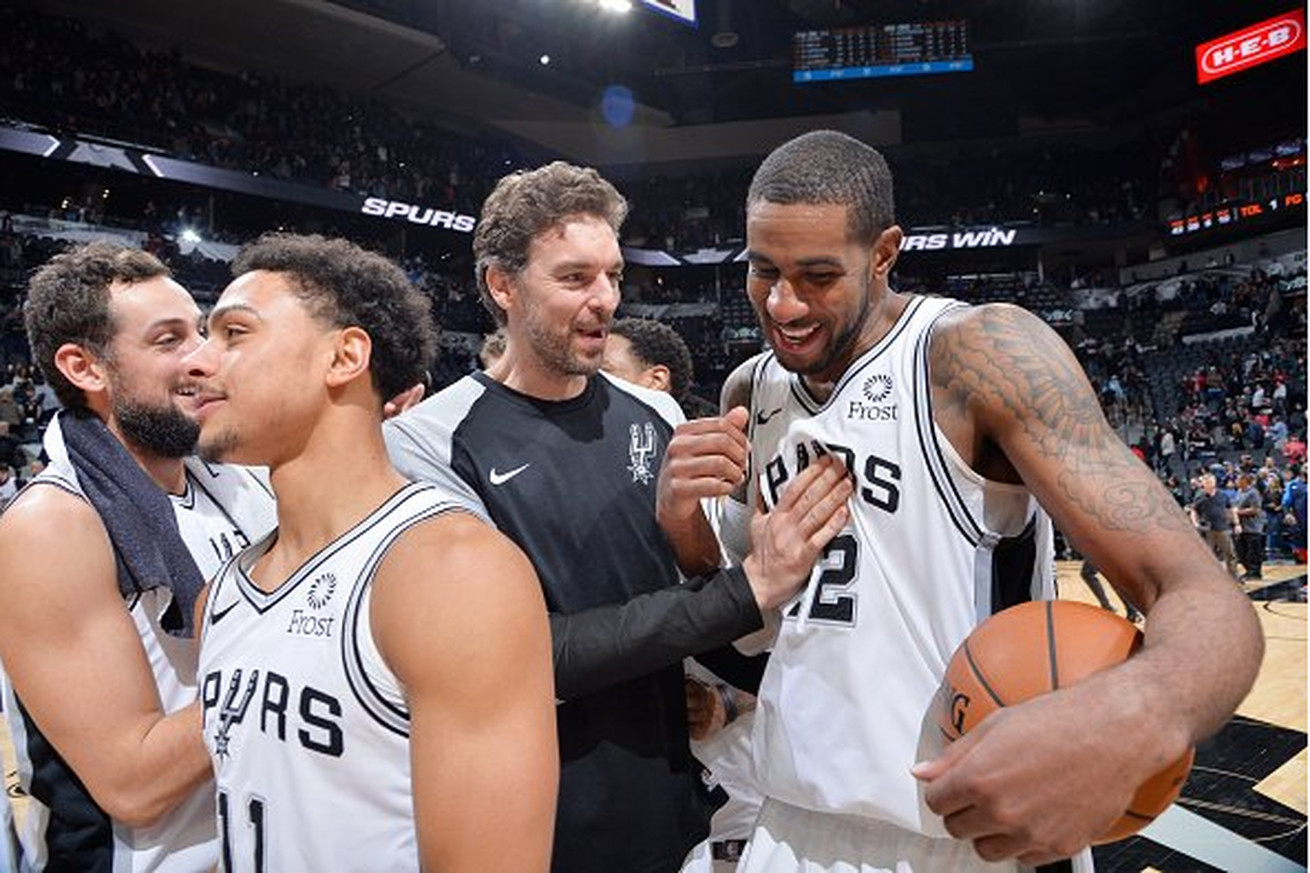 There’s no other way to put it: last’s night’s flamethrower of a game — a 154-147 2OT win by the San Antonio Spurs over the Oklahoma City Thunder — was insane. It was nearly impossible to keep up with the game itself, let alone all the wild stats being posted. Thanks to ESPN and Jordan Howenstine, we have a helpful list explaining every milestone that was accomplished last night.

Before last night, no Spur had scored more than 55 points since Tony Parker in 2008 against the Timberwolves. Aldridge scored a career-high 56, good for third in Spurs history behind David Robinon’s 71 and Gerorge Gervin’s 63. However:

The difference between those games and Aldridge’s performance? In both Robinson’s and Gervin’s cases, their teammates were trying to get them as many points as possible on the final day of the season to secure the scoring title — and in both cases, the Spurs succeeded. Aldridge’s 56 points, while taking two overtimes to get to, came in the normal flow of San Antonio’s offense.

Aldridge is the ninth player in the NBA to score 50 points this season. Also, the only player to score 50 at an older age than Aldridge (33) was Kobe Bryant, who posted 60 points in his career finale in 2016 at age 37. Finally, Aldridge was the first player to score at least 56 points without attempting a three since Shaquille O’Neal scored 61 in 2000.

‘ * ’= The best in the NBA “in the last 20 years” per Elias Sports Bureau. It is unclear if they are true NBA records, but it appears that before 20 years ago, the proper stats were not recorded to keep track. (Maybe play-by-play?)

For the Spurs, the 154 points were their most in a game since dropping 161 against the Paul Westhead-coached Denver Nuggets in 1990. You don’t have to go nearly that far back to find the last time OKC scored 147. The Thunder lit up the LeBron James-led Cleveland Cavaliers for 148 in regulation last January.

Did we mentioned the Spurs did all this against the league’s best defense despite getting relatively little from their leading scorer in DeMar DeRozan (16 points on 7-22 shooting, albeit with 11 assists)?

We can’t keep going without acknowledging the grit and toughness the Thunder displayed last night in the face of everything the Spurs were doing. That three-point barrage by the bench in the first half and the hyped-up crowd would have sent many teams packing. Not the Thunder, and per usual in no small part thanks to their MVP.

Although Westbrook has been averaging a triple-double for over two seasons now, last night’s was especially memorable. His 24 points, 13 rebounds, 24 assist-performance was a first by any player. The only other player to come close to posting those numbers was Isiah Thomas with 24-10-24 for the Detroit Pistosns back in 1985.

Brodie had his “Westbrook-gonna-Westbrook” moments last night with some poor decisions to shoot threes, especially in OT, but the positives for him far outweighed the negatives, and 99.9% of the time his performance would have led OKC to a win.

There might be even more out there, so if you find some other milestones from last night feel free to post them in the comments below. It was certainly a night none of us will forget anytime soon, so enjoy the moment, and pray that the Thunder don’t have revenge on their minds on Saturday. (This is the problem with home-and-away series in the regular season…)