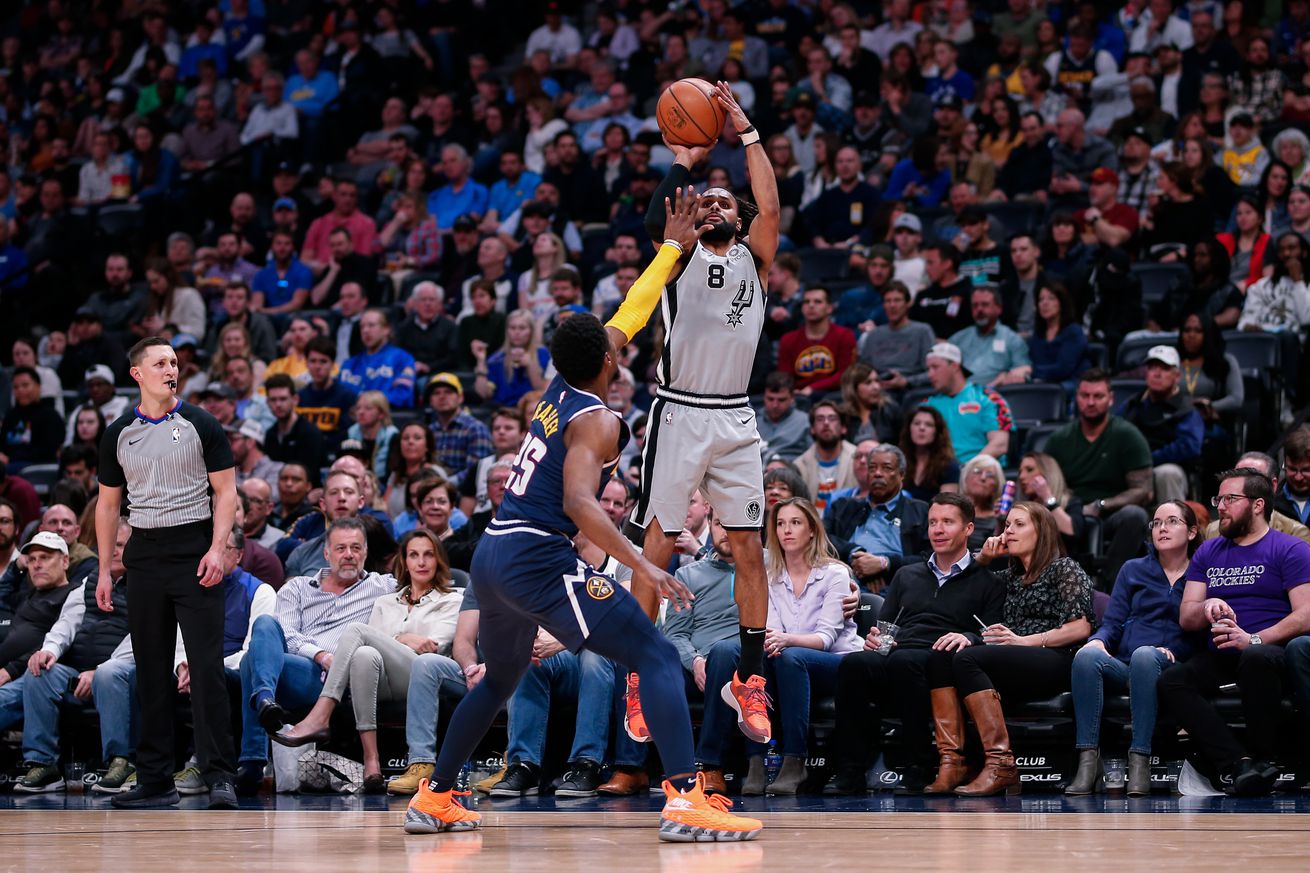 It was just one of those nights.

The Spurs left the Pepsi Center as proud owners of a shiny new whoopin’ on Wednesday night. The Nuggets, coming in on a back-to-back of their own, took control from the tip and never relented. The Spurs have any number of excuses for the way the game played out, from the mundane (didn’t have their legs, altitude) to the obvious (on the road, Nuggets are the 2nd best team in the West, 5/27 from three, have no idea how to play defense) to the absurd (Coach Popovich set an unofficial record for the fastest ejection).

Whether any of those are really relevant, or the game just reflects yet another rough patch in the team’s roller coaster season is hard to tell. Yet, despite all of that oddity, or maybe because of it, the Spurs broke out a couple of interesting offensive sets in the first half.

The first, a variation on their cross elevator set, used Davis Bertans in the post as the crux of a play designed to generate an open three. The Spurs used this setup twice, with the first coming late in the 1st quarter.

Marco Belinelli handles the ball up top with Rudy Gay at the top of the key, Jakob Poeltl on the right side of the free throw line, and Patty Mills and Davis on either side of the lane. Rudy runs out to the left wing to receive the ball, triggering a cross screen from Patty on Malik Beasley. Davis uses the screen to get position on the left block, and Rudy enters the ball to him.

This is an…interesting choice. With Rudy on the floor, it would make much more sense for him to be in the post. Before this game, Davis had posted up twice this season, a total he has now doubled. Were a bigger player guarding Rudy, this might make more sense, as that defender would likely have more difficulty dealing with the next part of the play, but here, with Torrey Craig on him, it’s an odd decision.

But Rudy does an excellent job of acting out his part of the subterfuge, moving towards the foul line like he’s clearing out to let Davis go to work. What he’s doing instead is setting up alongside Jakob for an elevator screen. As soon as Davis puts the ball on the floor, Patty shoots between the two, and they close the gap, momentarily stopping Monte Morris. Patty has a wide open look from the left wing, but like everyone else in the silver and black on this night, he couldn’t find the bottom of the net.

The Spurs broke it out again in the 2nd quarter, with some small changes.

This time, instead of an elevator screen, the Spurs have chosen to use consecutive screening actions to create space. The setup is similar, though Derrick White, in Marco’s role, starts out in the right corner rather than make the initial pass before clearing out. DeMar DeRozan tosses the ball over to LaMarcus Aldridge on the left wing, triggering the cross screen, and Davis takes up residence on the left block just like before.

Rather than wait for Davis to dribble, Bryn Forbes immediately runs up to set a back screen for DeMar, who (weakly) feigns a cut down the right side of the lane. Bryn slips out of the pick and runs out to the left wing. LaMarcus doesn’t quite land his screen and Bryn curls too far down the arc, allowing Gary Harris to contest the shot.

The result is the same, but the quality of the shot is much worse, though that is likely due more to sloppy execution than play design. DeMar needs to sell that cut, forcing Harris to consider helping, at least for an instant, and LaMarcus has to land his screen. For his part, Bryn needs to do a little better job reading the floor and knowing where to pull up. Had he stopped even a foot or two higher on the arc, it would’ve been much more difficult for Harris to get to him.

In that same stretch, the Spurs turned to a play that has tormented them on the other side of the court at times this year, the Spain pick and roll.

White handles the ball up top, while Davis loops down into the paint and Jakob runs up for what looks like a traditional pick and roll. The trick is that Davis is coming to set a back screen on Nikola Jokic, which should upend whatever coverage the Nuggets are trying to run.

To put it mildly, that’s not what happens. Jamal Murray easily slides under Jakob’s screen which should cause Derrick to either pull up from three or reverse course for a rescreen. But he does neither, instead continuing on to his right. With Murray in position on the ball handler, Jokic and Beasley just have to navigate the back screen, which they do with little difficulty, leaving the Spurs with no advantage.

Derrick picks the ball up as he looks for a pass, though given how well the Nuggets have played the action, he should know there’s nothing available. Fortunately, DeMar is there to bail him out, taking a dribble hand off and curling into the lane, where he manages to draw a pair of free throws.

At this point in the season, it’s clear the Spurs will only go as far as their offense takes them, and making plays like this a good indicator of how their night will go. They should be able to score on plays like these very efficiently. When they can’t, they likely stand no chance, as was the case in this game.