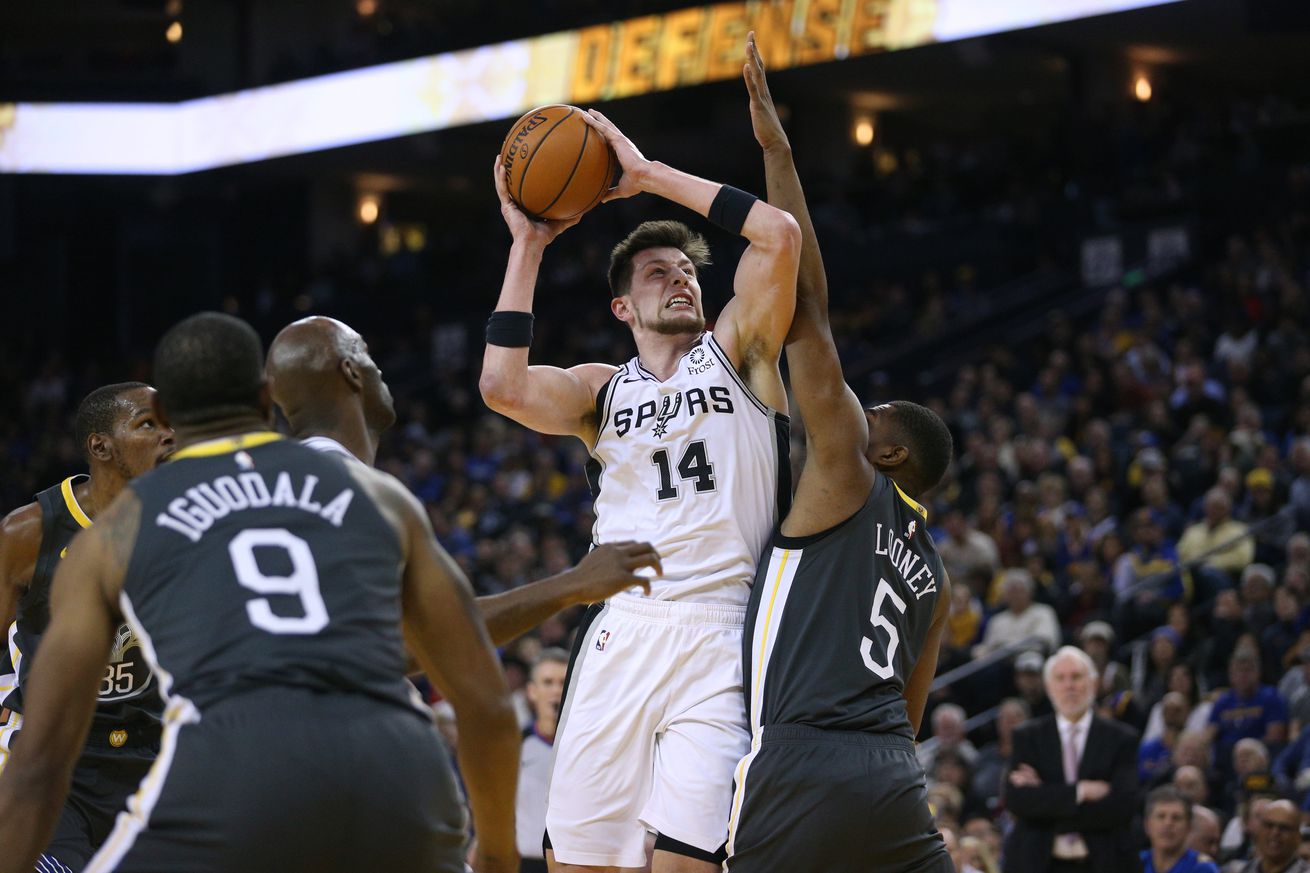 What to make of Drew Eubank’s recent emergence.

For a team that hasn’t drafted in the lottery in over 20 years, the Spurs have an awful lot of young talent. Their backcourt appears set for years come, with Dejounte Murray (22) and Derrick White (24) already poised to form a potentially devastating combo and rookie Lonnie Walker IV (20) seemingly well on his way to joining them.

On the other end of the roster, the team has Jakob Poeltl (23) grabbing starts in two-big lineups in the right match-ups, while rookie Chimezie Metu (21) polishes his game in Austin. The Spurs drafted each of those players, except Jakob, who they received in a summertime trade. As if that 3-year streak of success was not enough, the Spurs’ are hitting on their undrafted signings, too.

Drew Eubanks, a 22 year old, 6’10” rookie/two-way signee out of Oregon, is getting NBA minutes now, and flashing more potential than almost anyone expected.

There was some appropriate concern over what the Spurs would do if an injury hit Jakob or LaMarcus Aldridge when the team bought out Pau Gasol’s contract. The move appeared to limit the team’s flexibility with it’s lineups, too, possibly constraining their ability to use the twin-tower back line they prefer.

But Drew may be the answer to both of those questions. After having played before the 4th quarter just once in the team’s first 64 games — the Warriors game that LaMarcus Aldridge, DeMar DeRozan and Derrick White all missed — Drew has gotten 1st half minutes in both of the Spurs’ last two games.

In the first game, against the Nuggets, the Spurs’ started Jakob alongside LaMarcus, and Drew played 4 minutes bridging the 1st and 2nd quarters. Jakob missed the game against the Hawks, so Drew got 10 minutes as he spelled LaMarcus for 2 short stints.

That’s not a lot of playing time, but per Cleaning the Glass, those 14 minutes represent over a third of the non-garbage time minutes he’s played this season. With so little meaningful action, it’s difficult to use any type of statistics to make or refute the case that Drew might be a serviceable rotation player, but at least over the last week, he’s looked like he belongs.

In assessing him after his freshman season at Oregon State, Draft Express attributed most of his strengths to his athleticism. They also noted that Drew didn’t start playing basketball until he was 14, which helped explain his lack of feel for the game on the offensive end and some of his defensive shortcomings. It’s a great breakdown that is still very relevant.

That he’s only been playing the game for 8 years indicates that he might have more growth left in front of him than the typical 22 year old. On the other hand, that his strengths and weaknesses haven’t changed much in the two-and-a-half years since that assessment was written could be an indictment of his potential for improvement.

On the offensive end, he still hunts for dunks. That sounds like a good thing, but he frequently rushes the “pick” part of the pick and roll, slipping out on a sprint for the rim too early, leaving the ball handler covered and having generated no advantage.

He’ll learn that hanging in just a half a beat longer gives the ball handler more room and is thus more likely to generate a switch or create a passing lane. Screening is an art, and learning the nuance of how the angle and timing of each pick fits within the flow of the offense and with the style and abilities of each of the team’s ball handlers will take time.

Drew’s size and athleticism should make him a good roll man, but until he gets that down, his offensive utility will be limited because he doesn’t really bring much else to the table. . . yet. He doesn’t shoot particularly well. Even in the G League, just 12 of his 265 two point field goals have come outside 14 feet, and he’s made 5 of those. He’s not much of a force on the boards, either. The Spurs grab far fewer offensive rebounds with him on the court.

His contributions on defense are less limited. He’s already shown the ability to defend in space, and he’s got a decent feel for guarding the pick and roll.

He’s at his best with weakside help responsibility.

Although he struggles at times with awareness, getting caught by screens, and missing other help responsibilities, like with the rest of his skills this should come with more time and reps.

He has a troubling tendency to bite on fakes and draw bad fouls going for blocks, but at least he isn’t giving up and-ones.

All in all, Drew is a far more interesting prospect than most undrafted players turn out to be. He has NBA-level size and athleticism, and if he can improve as the roll man in the pick and roll, he should be able to replicate at least some of Jakob’s success with the Spurs’ shooting-heavy 2nd unit. In order to go any farther than that, he’ll need to dramatically improve his rebounding on that end of the floor, or develop some heretofore unseen vision and passing ability.

On the other end of the court, at 6’10” with a 6’11” wingspan, he’s unlikely to ever become a defensive anchor, but he’s serviceable against the pick and roll, and light enough on his feet to survive most switches. Again, against predominantly reserve-heavy lineups, Drew should be just fine right now. Whether he can do any more than that will likely depend on how well he’s able to catch up to the speed of the game and learn to anticipate what’s coming next.

He’s got a lot of work to do to actually crack the rotation, but as a third big capable of soaking up a few minutes as needed or fill in for Jakob in a pinch, Drew is more than ready. Now, he just needs a good nickname.