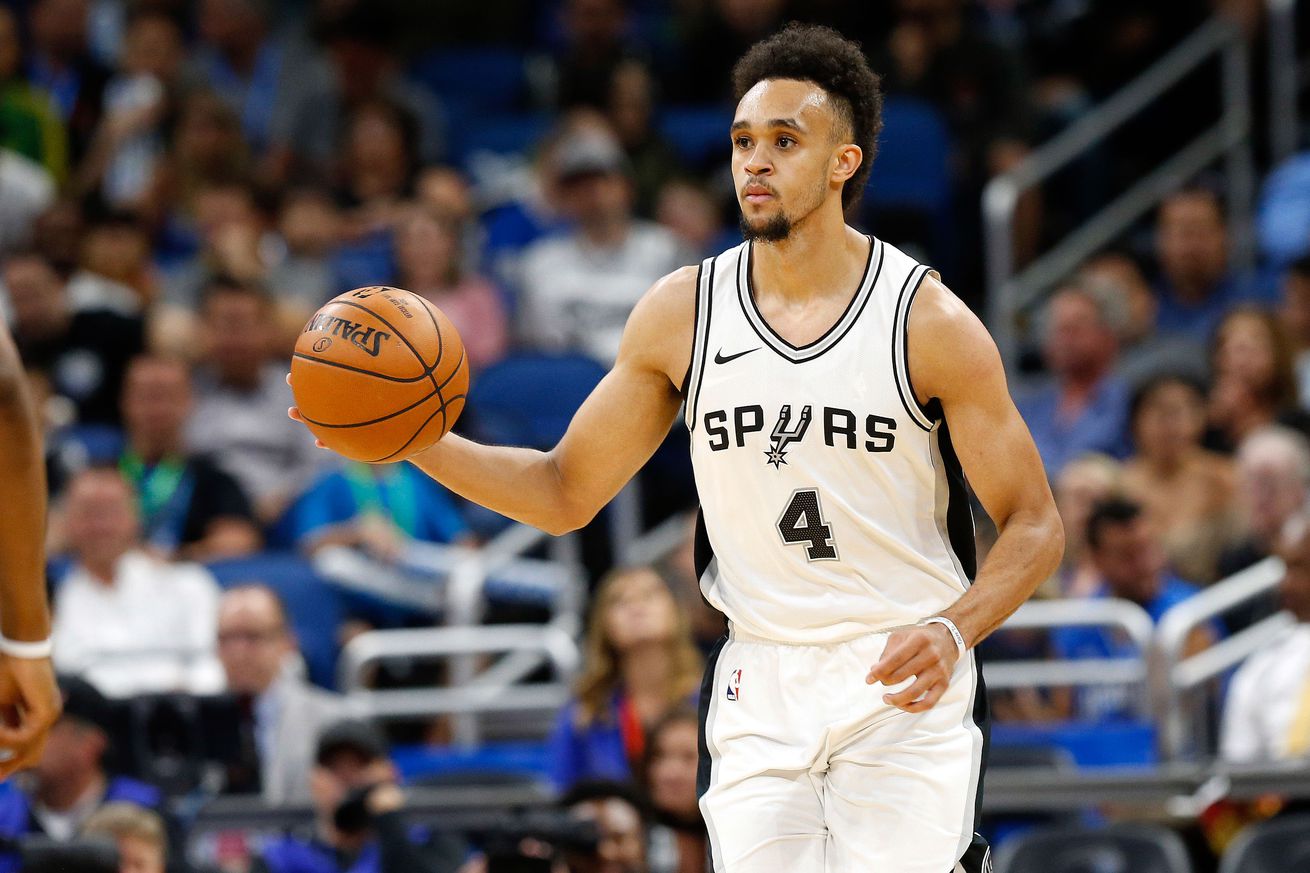 White can do a little bit of everything, which sets him apart in a roster filled with specialists.

Derrick White’s breakout performance in Summer League was one of the brightest parts of this offseason. After a rookie season spent mostly in Austin, White looked ready for a role with the big club at a time in which a player of his characteristics is needed.

On a roster filled with one-way and one-skill guards, White could be the glue guy whose well-rounded game makes lineups work. If he can really take a leap into becoming a rotation player, the Spurs would be a much better team for it.

His performance in Austin and Summer League suggests he could. While it’s hard to give too much weight to how a prospect does in those settings, even if it was against fringe NBA guys White stood out. He averaged 20 points, five rebounds and over three assists in G-League play, dominating like an older rookie should. Then this offseason, he went off on the Utah Summer league competition, showing off more shot creation and maturity as a ball handler. It really seems like White took advantage of what was essentially a red-shirt rookie year to improve his game.

As mentioned, success in those lesser arenas doesn’t always portend a future as an NBA rotation player. But the way White got his numbers is encouraging. He didn’t have to dominate the ball to get points, and he looked comfortable as a spot-up shooter in his opportunities. He shared the court with other ball handlers and seemed to be fine with deferring when needed. His release looks good and it was consistent, even when he faced aggressive closeouts. White should be able to do well in a floor-spacing role next to a ball-dominant primary creator like DeRozan. He has that in common with most guards on the Spurs’ roster.

Yet unlike other backups, White also has a budding off-the-bounce game. In his time in Austin last season and in Utah this summer, he was asked to create for himself and others. His ability to do so is what makes him such an intriguing prospect, despite a lack of elite athleticism and an advanced age for a two-year man. White was able to hit pull-up three-pointers and get to the rim, a combination of skills the Spurs have had a hard time finding in their guards. His numbers were impressive, especially in Utah, but the comfort he showed in a featured role was even more encouraging. His work on the pick and roll was nothing short of masterful.

With DeRozan in tow and Dejounte Murray likely taking a more active role on offense, White won’t be asked to be the Spurs’ primary creator. Yet his ability to make something happen could come in handy when the defense shuts down the primary options or when he shares the court with off ball threats like Patty Mills or Marco Belinelli. Plays stopped last season when the ball reached a shooter that was covered. White has the tools to attack a closeout or ask for a screen and keep the offense going after receiving a pass. Some of the Spurs’ back court pieces lack versatility. White has it in spades, which should help Gregg Popovich find combinations that work.

Defensively, there are more questions about how adaptable White can be. At 6’5”, with a just a decent wingspan and a stringy frame, he doesn’t seem equipped to guard big wings. He might have to, if he’s going to get minutes in a crowded back court. It will be a challenge. He might similarly struggle against the quickest point guards, but he luckily won’t have to take those assignments often since the Spurs have Dejounte Murray and Patty Mills to handle them. Against similarly sized players, White can hold his own, showing effort and awareness. His ability to get steals and even some blocks should also give some lineups the defensive playmaking they would otherwise lack.

It’s that ability to adjust his game to fit the needs of the team that could make White a reasonable Manu Ginobili facsimile. For years Manu scored when needed, assisted when needed and made plays on defense when needed. White could do that, albeit at a lower level and in a smaller role, if what he showed in G-League and Summer League play translates to the next level. The Spurs could use someone who can just come in for 15 or 20 minutes a game and bring balance to lineups that are lacking in one area or another. White has the potential to be that piece. His versatility could be huge on a roster filled with limited players.

Whether he’ll get to play that crucial role is unclear. The return of Forbes and the signing of Belinelli suggest the Spurs might prioritize off ball shooting from their bench guards — and maybe that they are not ready to trust White yet. Dejounte Murray and Patty Mills will get most if not all point guard minutes, so there’s no room there. Even if DeRozan, Belinelli and Manu Ginobili, if he returns, spend some time at small forward, the back court is still crowded. There are not enough minutes for everyone, barring injuries. White will have to beat Forbes and Walker to get playing time and might need to siphon some of Manu’s and Belinelli’s minutes to have an actual opportunity to make an impact.

He’ll get his chance at earning those minutes in training camp. White might have less upside than some of the other guards and not an elite skill like others, but he appears to be the most well-rounded of San Antonio’s young guards. At a time in which versatility is at a premium, that has tremendous value.

After a terrific summer, now White will have to prove that his all-around game can translate to the highest level. If it does, he could be exactly the type of player this new iteration of the Spurs needs off the bench.