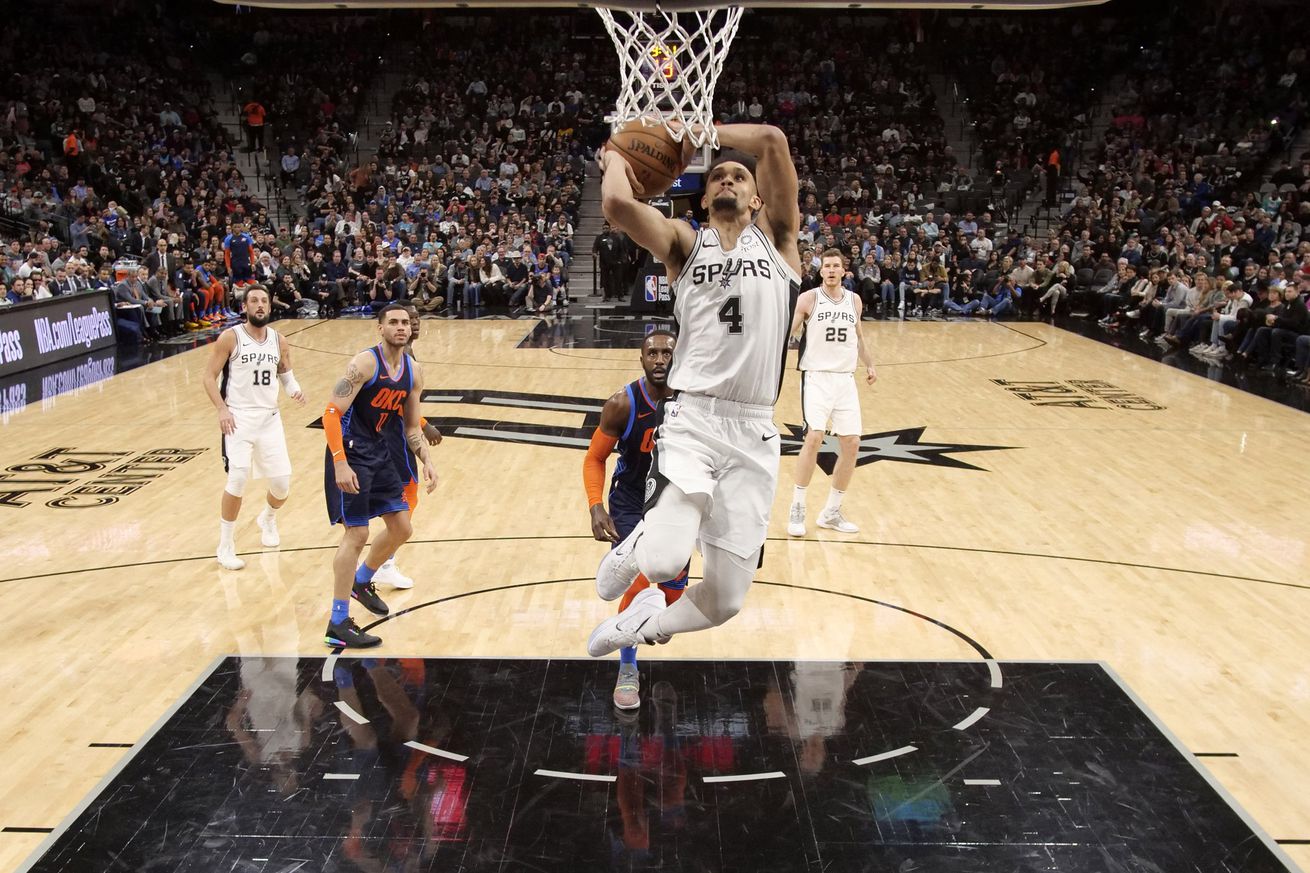 The versatile guard is putting together a breakout sophomore season that few people, including his coach, saw coming.

The starting point-guard spot in San Antonio has found new stewardship this season in the most Spurs way possible, with one promising 29th overall pick stepping up after a major injury to another. Over the last dozen games, second-year guard Derrick White has averaged 15.1 points, 4.3 rebounds and 3.5 assists, 63.5% from the field and 50% from three, playing a pivotal role in the franchise’s stubborn cling to relevancy after totaling just 139 NBA minutes his rookie season.

While White’s production will raise some interesting questions about the long-term job when the roster’s back to full strength next season, it can only be seen as a boon for the time being. In him, Gregg Popovich has a reliable playmaker who can set the table for teammates, play off the ball, shoot the three and make things happen on the defensive end after losing his four best defenders in the summer and preseason.

“Derrick, you know, he’s rising to the challenge,” Pop said after White’s 19-point, 4-assist performance in the Spurs’ win over Toronto earlier this month. “He wasn’t expected to be in this position this season. He’s grown by leaps and bounds every week. With every game he seems to be more confident, making great decisions, and his demeanor is wonderful. The guys trust him out there so I’m really happy for him. He’s doing a fine job.”

Only DeMar DeRozan has assisted LaMarcus Aldridge more this season than White, who consistently looks to set the big man up with high-percentage looks around the basket. There are a handful of reasons behind Aldridge’s sustained hot shooting since Thanksgiving, but having another player who can throw pinpoint entry passes has been a part of it.

The learning curve isn’t the same for all young players, and White’s maturity — he’ll turn 25 this summer — makes him something of an atypical NBA sophomore, one who can more readily make reads, adjust, and pick when to defer or when to be aggressive with few plays drawn up for him. Almost 46% of his attempts are coming around the rim, where he’s hitting well above the league average at 62.8%.

Older prospects are sometimes defined by their polish or basketball IQ rather than athletic upside, but White’s arc might be different, considering the late-bloomer hit his major growth spurt when he was in college. He’s already shown a number of physical gifts that shine even on the NBA level, from his size and length as a ball-handler to his speed, which was among the best in his rookie class. Consider the possession below, in which White pushes the ball up the floor while leaving multiple Thunder players in his wake, then stays under control enough to let the sole defender ahead of him go past before finishing at the rim.

White’s measurables also translate to the defensive end, where Pop’s given him the most important assignments on the perimeter on a nightly basis since reinserting him into the starting lineup in early December. On this play, he absorbs the contact initiated by Russell Westbrook and sends his shot back.

He’s also been a willing weakside defender, the type of contribution teams seldom see from the point-guard spot.

The idea of a defensive backcourt of White and a rehabilitated Murray should make Spurs fans giddy, especially when that youth movement also includes 23-year-old Jakob Poeltl, rookie Lonnie Walker IV, and younger pieces like Davis Bertans (26) and Bryn Forbes (25). And that’s not factoring in what PATFO decide to do with what should be two first-round picks in the 2019 draft.

Other questions will inevitably coincide with Murray’s — namely, Who should be this team’s point guard? and its navel-gazing spinoffs like, Does the Spurs’ system technically need a point guard? and How will Murray, White, and Derozan all share the floor? Fortunately, White’s versatility should make all the calculus easier. That begins with a knack to move and score off the ball. His role this season hasn’t led to too many play calls like the below, but his ability to come off screens and shoot on the move would certainly help a change in role, if necessary.

Whatever comes next, White is looking like the latest testament to the Spurs’ development “apparatus”, as former staffer Kirk Goldsberry called it in a recent appearance on The Hoop Collective, as well as a reason for fans to cool it with the pleas to see Lonnie Walker in San Antonio. Everyone from Goldsberry to White himself has attributed at least a part of his readiness to the type of role he was given in Austin, and it’s hard to find fault with the organization’s patient approach. As a result, the Spurs’ present and future, both panned not long ago, feel that much brighter.