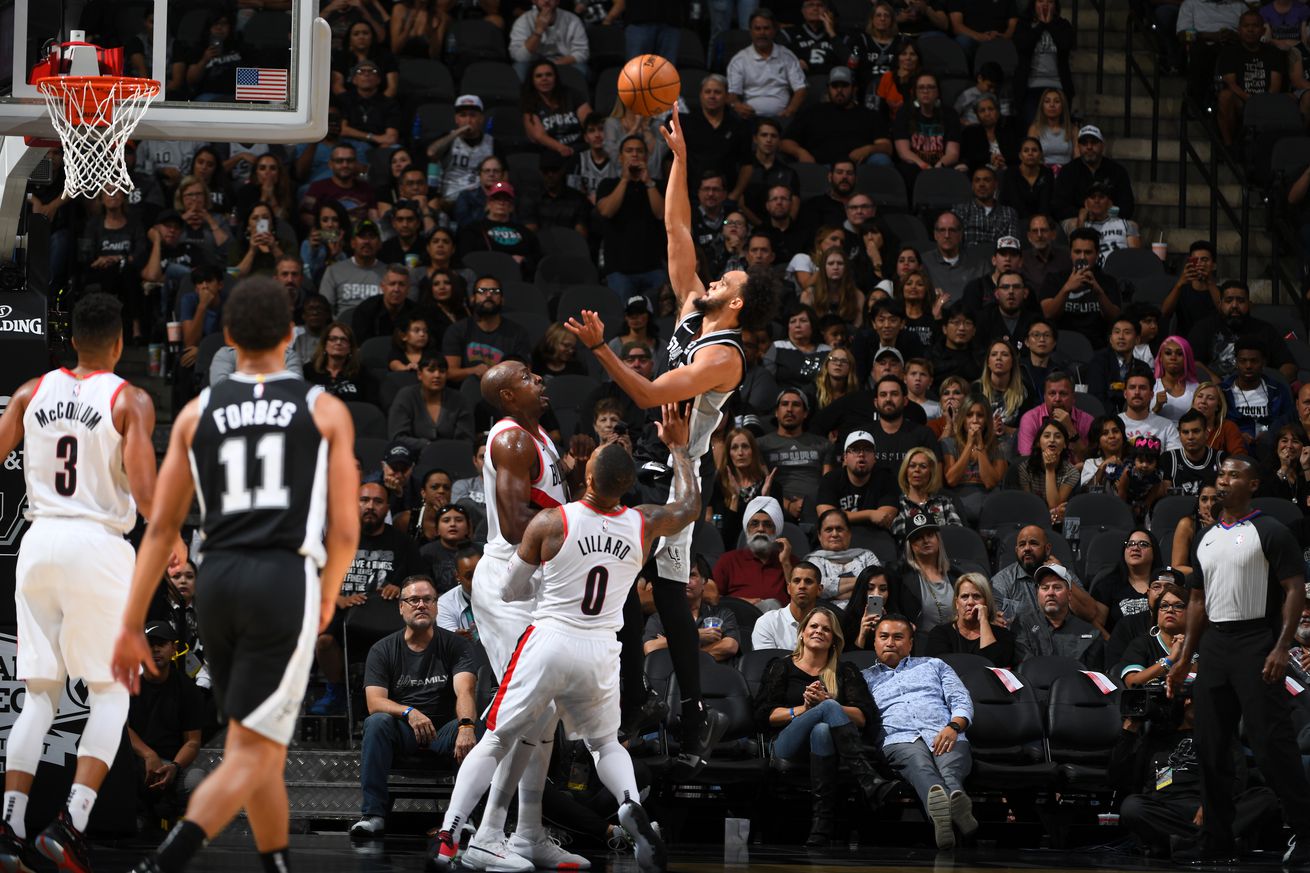 On a night when Murray had a relatively quiet game, White stepped up and filled the void in a huge way.

Most of the headlines coming out of San Antonio has been centered around the return of Dejounte Murray, and rightfully so. After missing the entire 2018-2019 season due to an ACL tear in his right knee, Murray teased Spurs nation throughout the summer with videos of his progress. Since signing an extension right before the first game of the regular season, he has not disappointed, averaging 14.7 points, 8.3 rebounds, 6 assists, and 2 steals while on a serious minutes restriction. Beyond the numbers, he almost single-handedly willed the Spurs to their first two wins of the season with energy and aggressiveness.

All this focus on him has taken some of the early spotlight off Derrick White. It’s important not to forget how incredible White was for the Spurs last season. The Spurs were under .500 before he returned from injury and became a mainstay in the starting lineup. He immediately improved the Spurs’ horrendous defense, and although it took some time for him to find his footing, he eventually proved himself to be an offensive threat. He was one of the best players for the Spurs in the playoffs, pushing the more talented Denver Nuggets to the brink of elimination in the first round.

White’s play was so strong last season that many of us Pounders spent the summer discussing how the return of Murray would impact White’s spot in the rotation. Though I felt it would be difficult for Gregg Popovich to justify moving White to the bench, he has made White’s role crystal clear early in the season. If Murray is on the court, White is on the bench, and vice versa. Those two have only shared the court on one play, which was the final play of the Spurs’ narrow victory against the Washington Wizards.

So far White has said all the right things, embracing his role off the bench:

“Whatever coach wants me to do, I do. I’ve been enjoying it. Whatever I can do to help the team win games. Patty, Belli, Rudy, Lonnie — just running around finding the shooters out there. The floor is open. It’s been fun. It’s been cool.”

In a vacuum, Pop’s decision makes sense. Murray and Bryn Forbes fit well together on offense, as does White and Patty Mills. Even so, something has to give. Murray’s minutes restriction will eventually be lifted, and when that happens, I expect Murray to average over 30 minutes a game. I only minored in math during college, but I believe an increase in minutes for Murray means either less minutes for White, or Murray and White will be required to share the court together.

Even with both Murray and White being strong perimeter defenders, opposing guards have had their way with the Spurs early in the season. Much of this has to do with teams attacking Forbes, Mills, and Marco Belinelli on defense. Having both White and Murray on the court at the same time would make it much more challenging on opposing guards. As we saw with Damian Lillard, it’s impossible to stop some of the elite guards in the NBA when they are on a roll. If that happens, it happens. As a defender you simply tip your proverbial cap to them and move on to the next play. Watching that happen is much more palatable to watching teams constantly attacking Forbes, Mills, and Belinelli without much resistance.

White’s coming out party unquestionably occurred last season, so let’s just say that his performance against the Blazers was his “coming out from behind Murray’s shadow” game. It was a nice reminder to both fans and opposing teams that White is fully capable of taking over a game. The way in which he does so may not be as flashy as Murray, but it’s every bit as effective. In his postgame presser, Pop said it best:

“Derrick had a great game. He looks like himself now. He was super in a lot of different ways.”

The Spurs were down 21-4 midway through the first quarter before White entered the game. In his first stint on the court, he scored 10 points while dishing off 2 assists and grabbing 2 rebounds. He was a big reason the Spurs were able to cut their deficit down from 19 to a more manageable 11, providing energy to a team that came out listless. I caution comparing anybody to the great Manu Ginobili, but with him embracing the 6th man role early in the season, the comparison isn’t completely ridiculous. How many times over the years did we watch the starting unit falter early in the game, only to watch Ginobili come into the game and completely flip the script? The Spurs would maintain the momentum the rest of the half, cutting the deficit to 6 going into the locker room.

White was quiet in the third quarter but the Spurs continued putting their foot down against a Blazers team on a SEGABABA. With less than six minutes to go in the game, the Spurs had opened up a 19-point lead, and the crowd was chanting “Lonnie, Lonnie”. The Spurs were about to go 3-0, making a statement against a fellow Western Conference playoff contender.

Maybe Lilliard thought the crowd was chanting “Lilliard, Lilliard,” because the final four minutes of the game was Dame Time. He scored 18 of his 28 points during that time, and the Spurs ended up having to dodge some serious bullets from in in the final seconds of the game to squeak out a surprising barn burner.

White and others tried to contain Lilliard, but he was unconscious down the stretch. On offense, LaMarcus Aldridge, Mills, Forbes, and Belinelli all took turns missing shots. With the Spurs’ lead dwindled to just 4 with 2 minutes to go, White put the team on his back once again and scored their next 6 points. It wasn’t enough to temper the Lillard explosion, but it proved to be just enough to get the Spurs their third win in as many tries.

Although Mills has been just fine doing what Mills does and Forbes has been nothing short of a revelation, White and Murray are the keys that make each their respective units go. It will require patience as we wait for Murray’s minutes restriction to be lifted, but expect to see their minutes together increase as the season progresses.