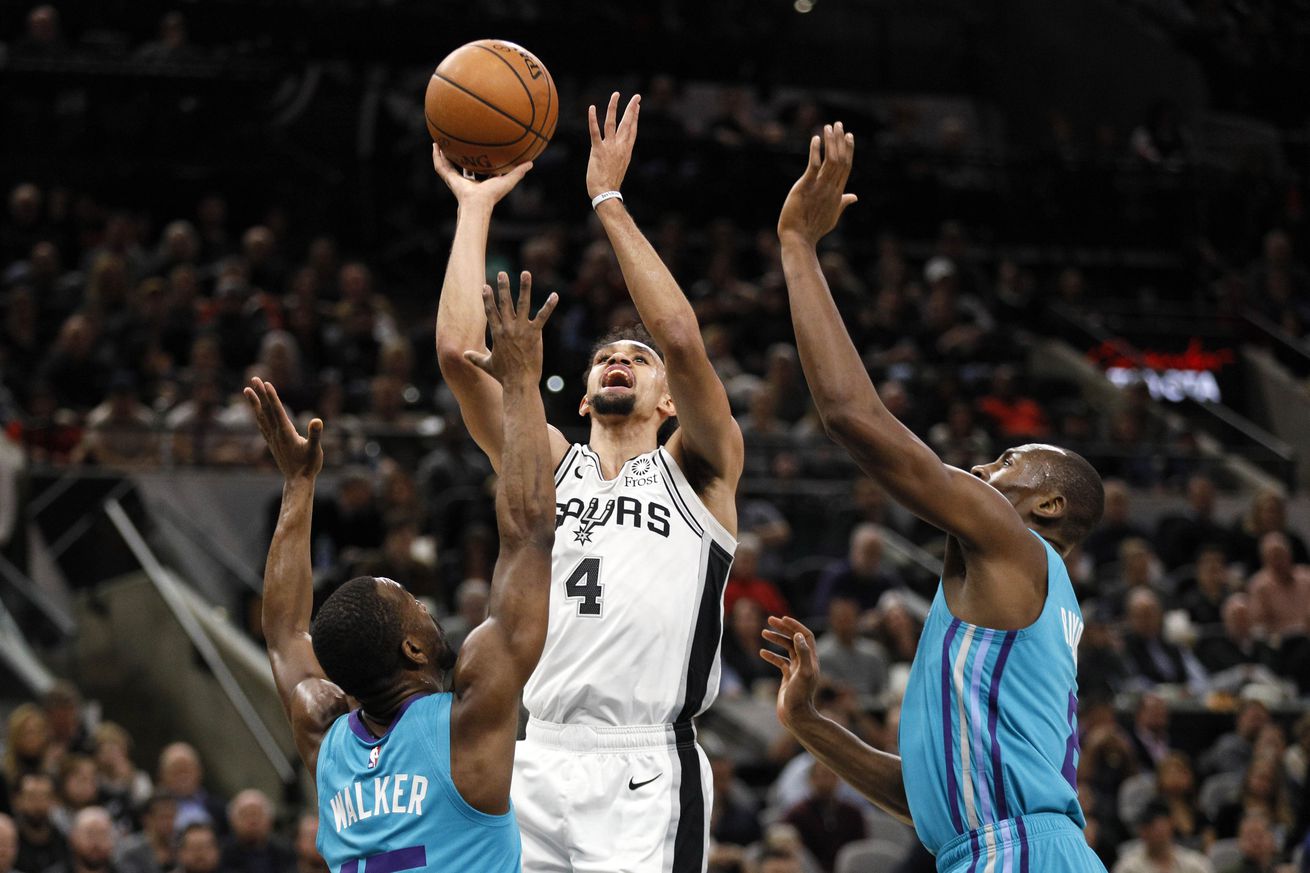 The Spurs’ offense looks a little broken right now. Over their last four games, the Spurs are scoring just 107.2 points per 100 possessions, far below their season average of 113.5, and that’s including their offensive explosion against the Thunder. Without Rudy Gay over that period, and with DeMar DeRozan in a slump, the team has struggled to score.

In the three of those games that didn’t include outright dominance from LaMarcus Aldridge and what may have been the best team-wide three point shooting night in NBA history, the Spurs scored 98.6 points per 100 possessions, which would be last in the league. Two of the team’s least efficient scoring games of the season occurred in that span: Wednesday night’s contest against the Grizzlies was their worst and Monday night’s game against the Hornets was their 5th worst.

While spacing issues and an aggressive defense were mostly to blame for last Wednesday’s performance, the Spurs very clearly missed the offensive punch that both Rudy and Marco Belinelli typically provide against the Hornets. In terms of both shot-making and the ability to compromise a defense, the Spurs were left to find offense where they could. On a night where DeMar had more turnovers than assists, the Spurs really only had two good options for creating offense. They could toss it in to LaMarcus on the block, which they did 18 times, or leave the ball in the hands of Derrick White.

Derrick led the team in touches for the 3rd game in a row, and finished with a tidy 18 points on 12 shots and 1 shooting foul drawn, 7 assists, and no turnovers. He orchestrated the offense beautifully at times, and a 1 minute stretch early in the 2nd quarter showed some of his best qualities.

After a solid block by Jakob Poeltl in transition, the Spurs get a chance to run, a rarity in this game. Derrick makes the most of it by deftly manipulating the Hornets defensive matchups with a slight hesitation and drive to the middle. As he brings the ball up the floor, the Hornets are cross-matched, but not terribly so.

Willy Hernangomez is matched up with Jakob and our beloved Tony Parker is heading out to pick Quincy Pondexter. Devonte’ Graham is on Dante Cunningham, Miles Bridges has Derrick, and Malik Monk is trailing Davis Bertans. Monk is much smaller than Davis, but the Spurs aren’t likely to start calling Four Down for him anytime soon.

Davis’ cut through to the wing, combined with Derrick’s hesitation and move towards the key is enough to confuse those matchups.

Instead of following Davis through the paint, Monk swipes at the ball as Derrick drives by. Bridges stays with Derrick, too, leaving Davis wide open on the wing.

Just a minute later, Derrick manipulated his way into another easy assist.

The Spurs’ initial action here is a pick and roll between Derrick and Jakob. Hernangomez drops deep in the paint and Bridges helps farther off the strong-side corner than you’ll ever see again, so Derrick snakes back to the center of the floor. Hernangomez plays the space very well, leaving no room for a lob over the top to Jakob, and buying time for Graham to recover to Derrick. Once he does, Derrick pulls up and tosses the ball out to Bryn Forbes.

Bryn’s abbreviated attempt at an attack goes nowhere and he gives it right back to Derrick with just 10 on the shot clock. Jakob runs up for another pick and roll in the exact same set up as before. This time, though, Hernangomez shows hard. This is a common tactic when the shot clock gets low, but there’s a little too much time left here, and there’s some confusion or miscommunication on the Hornets’ side.

With Hernangomez now out above the three point line and Graham going under the screen, there’s an opening back towards the center of the floor into the space just vacated by Graham. Jakob takes Graham with him into the paint, forcing Hernangomez to respond to Derrick’s incredibly deft shot fake.

Derrick’s footwork and eyeline do most of the work here, as he appears to be looking at the rim and settling into his shooting motion, but he also drops his left hand just a little extra like he’s gathering the ball. That’s all it takes to get Hernangomez off his feet and generate just enough of an advantage for Derrick to exploit.

Meanwhile, on the weakside, Quincy slips out of a backscreen on Jeremy Lamb and dives to the basket with Tony behind him. Graham steps up to stop Derrick once he gets by Hernangomez, leaving a tiny sliver of an opening to Jakob on the roll. Derrick threads the needle and Quincy clears out of the way as Jakob lays it in.

Derrick’s ability to create offense has been a luxury on most nights. When DeMar, Rudy, and LaMarcus all have it going, the points just sort of happen. But until Rudy returns, and especially if whatever’s going on with DeMar continues, Derrick will likely have to do this every night for the team to have a chance.