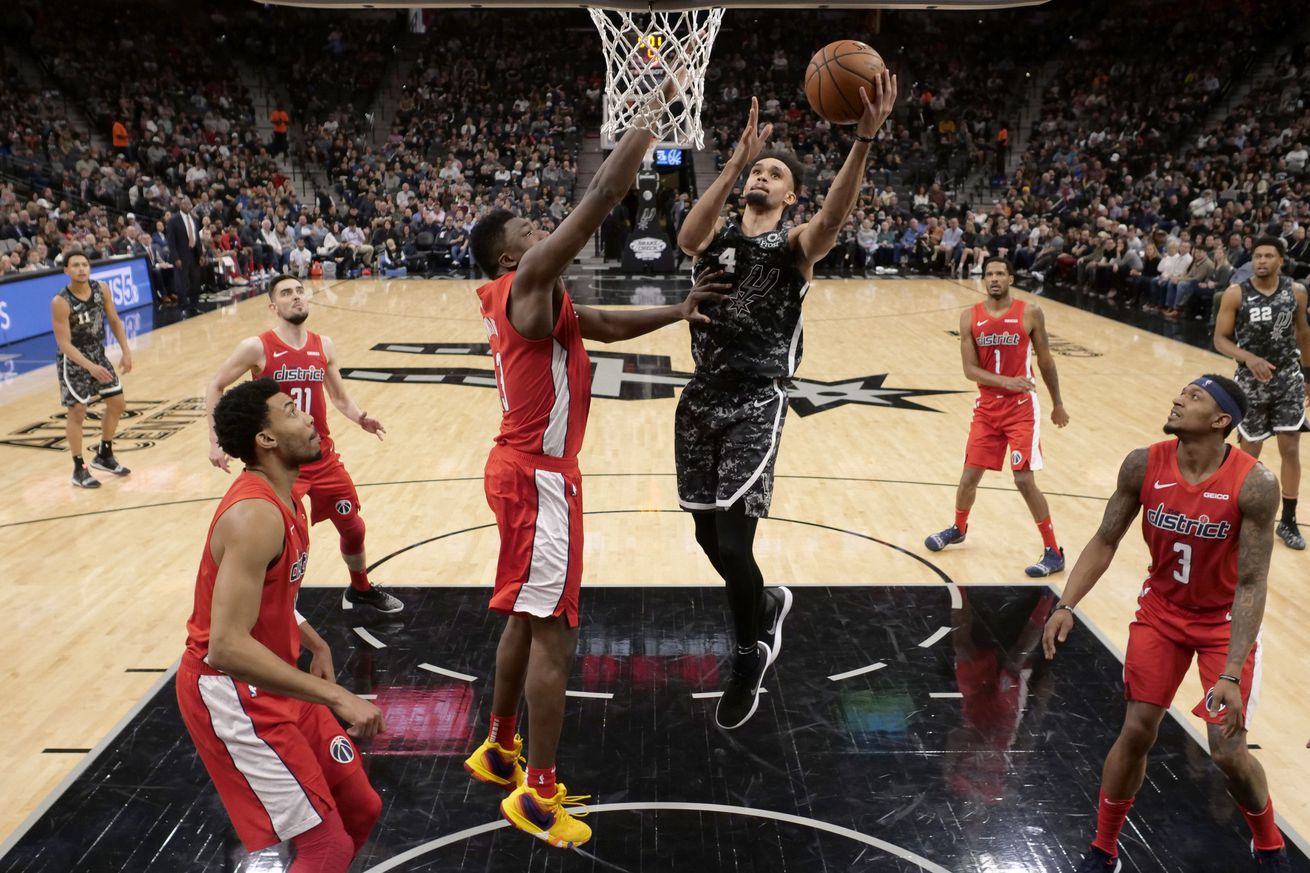 Few guards are more efficient in the paint than Derrick White.

The Spurs put together another solid performance in their Sunday night victory over the Wizards. LaMarcus Aldridge led the way (again) with 30 points, and six other Spurs chipped in double digit contributions, including Davis Bertans with a new season-high of 21 and Bryn Forbes with 16. Derrick White put up 16, too, but unlike every other Spur who made more than 2 shots, Derrick got his without taking a single three.

That he still only took 9 shooting possessions to get those points, without taking a three, is rare for a guard, even on a team whose coach famously hates 3 pointers. But that type of efficiency seems to be White’s hallmark. After a less than ideal return from injury, Derrick hit his stride right along with the rest of the team in early December. Since returning to the starting lineup on December 9th, he’s shooting 56% from the floor, with a TS% of 64.3, which is the 6th best mark for a guard over that time.

He’s shot well from three, at 39.6% since then, and he’s hitting 77.6% of his free throws, but both are on relatively low attempts. He’s only taking 2.1 threes and 2.3 free throws per game. Instead, his ridiculous efficiency has been driven by a very un-guard-like shot profile. Per Cleaning the Glass (CTG), only 8 guards shoot more often at the rim than White and, of them, only Eric Bledsoe shoots more accurately within 4 feet.

The heat map of his made field goals since December 9th makes it very clear where he does the most damage.

If we zoom in a little closer, it gets even more impressive. Since December 29th, White has made 75% of his attempts in the restricted area, but this game was a bit of an outlier, even for him. He took 5 shots at the rim and made all of them. He also got fouled on 2 more attempts at the rim, and made all 4 of his free throws.

The only two rotation players on the team who shoot a higher percentage of their shots at the rim are Jakob Poeltl and Pau Gasol. In that respect, he’s bears a lot of similarity to a guy who used to play point for the Spurs.

White drives, cuts, and finishes incredibly well, which makes him a ruthlessly efficient role player. Efficiency seems to be a common theme on this team, but he’s unique in that despite his relatively low usage rate, he doesn’t have to rely on other players to penetrate the defense. His cuts benefit from the attention the Spurs’ stars draw in the post, but he can and does get to the rim on his own.

Put aside for a second Lonnie Walker IV’s between the legs hand off to himself before passing the ball to White and appreciate just how much of an individual play this is. The Spurs appear to be looking for a post up for Rudy Gay on the left block, but with Tomas Satoransky guarding him on the left wing, Derrick sees a tiny opening.

Satoransky is not in great position. His left foot is just slightly forward but he’s not shifted enough to the middle of the floor to deny the driving lane. He’s probably thinking about the entry pass and how effective LMA and Gay had been out of the post up to this point, but he’s obviously underestimated Derrick’s quickness.

White blows by him so quickly that Troy Brown can’t help stop penetration and Trevor Ariza has no chance to stop the two-handed slam without fouling.

Ariza has been a very good defender for a very long time, but he underestimates White’s acceleration. He just can’t slide quickly enough to keep up. Of course, he’s in a difficult position with Aldridge rolling on his back, but Derrick deserves a lot of credit for creating this seam and then manipulating the defense to keep it open long enough for an easy lefty layup.

With Jeff Green on the high side and nobody down low, both Aldridge and White read this play the same way. LaMarcus isn’t quite able to land a screen on Bradley Beal, but he keeps Green up high, which is good enough. Derrick doesn’t blow by Beal, but he has enough of an advantage to draw the foul, and if Satoransky hadn’t helped in time, likely finish the layup.

White’s ability to create and convert these attempts at such a high rate indicates the Spurs might be well-served to increase his usage rate. So far this season, he uses just 17.4% of the team’s possessions, which is in the 11th percentile for point guards, per CTG.

Handing him even a couple more possessions per game in the pick-and-roll or in plays designed to generate penetration would likely help the offense become even better. That may sound a lot like picking nits when the team has the 6th best offense in the league, but that doesn’t make it any less true.