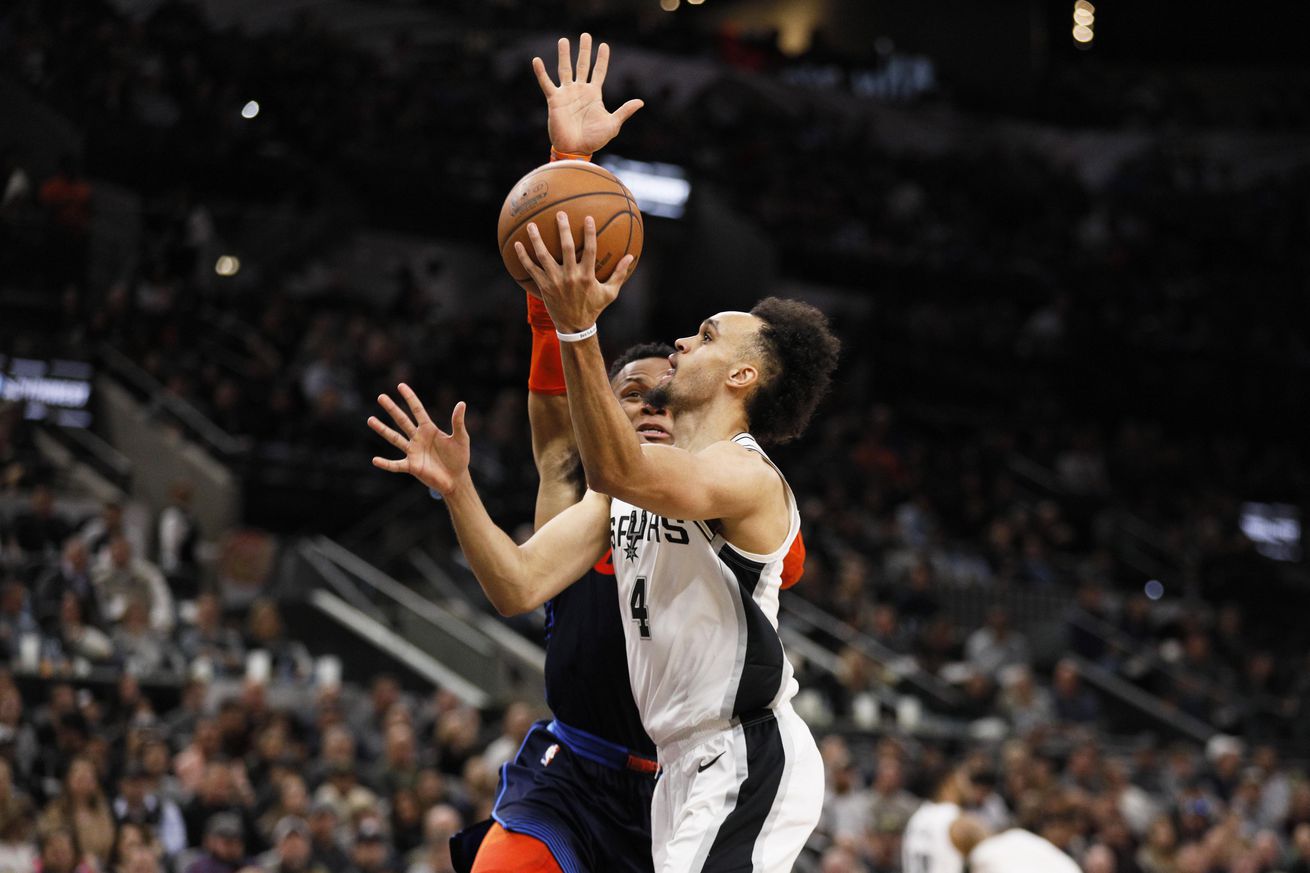 We didn’t see it coming, but maybe we should have.

One of the key talents of the San Antonio Spurs organization is the ability to identify players, bring them out of relative obscurity, and turn them into solid rotational pieces on winning teams. Whether searching oversees, among NBA castoffs, or even from G-League tryouts, the Spurs have signed and transformed players from seemingly everywhere.

For those who follow the Spurs, their success at finding these players shouldn’t come as a surprise. The Spurs typically look to add high-character players, or as Coach Gregg Popovich likes to call them, “players who have gotten over themselves.” It can be easy to overlook character when constructing a roster, especially if the player can leap out of the arena or pull up from thirty, but character is every bit as important as the player’s basketball skills. Don’t get me wrong, the Spurs are great at finding talent, but they are even better at maximizing it.

This is the foundation behind the entire Spurs’ system. Players listen, develop, and understand their role within the system. Some may see this as pigeonholing players, but I don’t believe that to be the case. A player’s role within the system is not static. Once a player gains the trust of the coaching staff, his role expands and the system gets adjusted to account for this change.

This leads me to Derrick White, who seems to be following a familiar path. His only college recruit came at the hands of Colorado-Colorado Springs, a Division II culinary school that doesn’t even offer basketball scholarships. After playing three seasons there, White sat out a season before becoming eligible to play his senior year at the University of Colorado. Playing for a Division I school in the Pac-12 Conference finally gave him an opportunity to showcase his eclectic skill set. In his lone season for Colorado, White averaged 18 points on 51/40/82 percent shooting to go with 5.5 rebounds, 4 assists, 1.5 steals and 1.5 blocks.

The Spurs ended up drafting White 29th in the 2017 NBA draft. Though his skills could not be ignored, White’s age brought into question his ceiling. Nevertheless, the pundits did what they do every draft and immediately declared White a steal for the Spurs. I can’t blame the media and experts for falling into this trap, as the Spurs do get extreme value out of their selections, but I feel they typically ignore the process behind the success.

Last season White was mostly relegated to the G-League Spurs, though he did show flashes of his potential in his short stints in the NBA. White had a fantastic season in the G-League, leading his team to the championship. In the finals, White was able to show off his entire arsenal.

Dejounte Murray’s development received the majority of the attention during the offseason, but White had the attention of the coaches. Back in June, Spurs assistant coach Will Hardy was asked about White’s development, to which he had this to say:

“Derrick’s growth from this time last year to now has been off the charts,” Hardy said. “His time spent in Austin last year was really good for his development. We are really excited about Derrick’s future.”

Unfortunately for White and the rest of Spurs Nation, our chance to see White’s development was put on hold when he tore his left plantar fascia during a preseason game. When White did eventually return to the court, his role had yet to be defined. His first month back was filled with inconsistent minutes and inconsistent play.

A month ago Pop inserted White into the starting lineup on a permanent basis. This turned out to be a fantastic decision for both White individually and the team overall, as the Spurs have gone 13-4 since Pop made this move. Even though White’s offense took a while to come together, his place in the starting lineup had an immediate and resounding impact on the defense. In the first eight games after placing White in the starting lineup, the Spurs held each opponent to under 100 points, the longest such streak in the NBA this season.

Then, seemingly out of nowhere, White’s offense hit a new and unexpected gear, and he quickly became a legitimate two-way player. He’s scored double-digit points in each of his last eight games, averaging 17 points on 67/53/83 percent shooting to go with with 4 rebounds, 3.2 assists, 1.6 steals and 0.5 blocks. In addition to putting up these numbers, he’s been tasked with guarding the opposing team’s best perimeter player. During this eight game stretch he’s had to guard the likes of Jamal Murray, Kyrie Irving, Mike Conley, Kawhi Leonard, and Russell Westbrook.

One of White’s knocks coming out of college was his lack of burst or shiftiness, which was expected to make it difficult for him get to the rim or stay in front of opponents at the NBA level. He’s definitely more athletic than advertised, as evidenced by some of his emphatic dunks and blocks. As far as staying in front of opponents is concerned, he has good lateral movement and excellent instincts, which helps to overcome any of his other limitations.

Here White is able to get past a series of screens and stay in front of Kyrie Irving. He doesn’t give Irving any space to get off a shot, resulting in a last ditch attempt at a three-pointer by Jayson Tatum. I’ve seen several examples over the past few games of opposing point guards making a move to the basket off a screen, only to have White fight over the screen and use his lateral quickness to stop the play in its tracks.

White also has quick hands, which allows him to poke balls away from opponents or cut off passing lanes. He’s also mastered the Kyle Anderson special, which is to let an opponent get past him, only to reach around the opponent to knock the ball away. Below is his six-steal night from a couple weeks ago against the Denver Nuggets.

.@Dwhite921 set a new career-high with 6️⃣ steals tonight in front of his hometown crowd.#GoSpursGo pic.twitter.com/EL6bFp4Ov2

The final steal in the clip above shows another prime example of White’s ability to move laterally and keep the opponent from getting into the painted area. This time, he not only stopped Murray, but he took the ball away from him as well.

White may never reach Danny Green’s elite level of blocking shots at the guard position, but he’s going to be above-average in this regard. He had an excellent block on Irving during an isolation play against the Celtics, and even more impressive was White’s block on Jerami Grant in double overtime of the Thunder game. It was a thing of beauty, and sealed the victory for the Spurs. It’s definitely worth watching again. And again. And again.

Derrick White (@Dwhite921) sacrificing the body for the block for the @spurs .. in DOUBLE OT!@austin_spurs | #GLeagueAlum pic.twitter.com/bOvDAZgpCJ

It should be noted that for better or worse, White has an almost Manu-esque style about his game. Namely, he is more-than-willing to sacrifice his body for the betterment of the team.

Offensively, White continues to show us more with each passing game. Off the dribble he has a knack for getting past his initial defender, though earlier in the season he was settling for floaters in the paint far too often. He’s now taken the next step (literally) and has turned these floaters into much more efficient layups. He’s crafty around the rim, contorting his body in a number of ways in order to score.

If the lane is not open, he has the ability to knock down the mid-range jumper, even off the dribble after being chased off the line. The final piece to his scoring puzzle is the three-point shot. He’s shooting a respectable 33% this season, and his accuracy from deep has been improving as the season has progressed. More importantly, his form looks good and his launch angle is consistent. I’m trying not to get ahead of myself, but White could turn into a scoring threat from all three levels of the court in the not-so-distance future.

White is a great passer out of the pick-and-roll. His passes out of such plays have resulted in a Points Per Possession (PPP) of 1.2, which is inside the top 10% of all players in the NBA. He also has great vision inside the painted area, and is oftentimes able to find a teammate for a layup or an open shot on the perimeter. He’s great at getting the ball to LaMarcus Aldridge in the post, and he’s been improving his high low passing to Aldridge. Once he’s mastered that technique, I hope I can finally get my wish of Pau Gasol only playing in garbage time.

White has been playing great basketball for a while now. His net rating since becoming a starter is +16, which is good for 2nd on the team behind the advanced metrics guru himself: Davis Bertans. Though White has been able to stay under the radar up to this point, after that double-overtime win against the Oklahoma City Thunder on national television, the rest of the basketball world will be on notice. Aldridge wasn’t the only Spurs’ player who had a career night in points scored. White scored a career-high 23 points on another efficient night, including some key buckets down the stretch.

Although the Spurs’ developmental system cannot be ignored, White has all the intangibles that coaches look for in a player. I’m constantly amazed with his poise on the court, no matter the situation. He never seems to be in a hurry and never tries forcing something that isn’t there. His shots are high-percentage, and his passes are accurate. White also seems to have ice-water in his veins, as he’s shown no hesitancy in taking (and making) huge shots towards the ends of games. His fearlessness is remarkable given where he is in his career. His basketball IQ is off the charts, which allows him to almost always make the right decision on the court. He has an excellent feel for the game and plays the game the right way, which are things that cannot be taught.

It’s no small feat that he’s closing out games in his first true season in the NBA. Even more impressive is that Pop has entrusted White with running the offense during important moments of a game, and he’s done an excellent job in this role. It’s difficult to gauge exactly how good White can be, but he certainly has my attention.