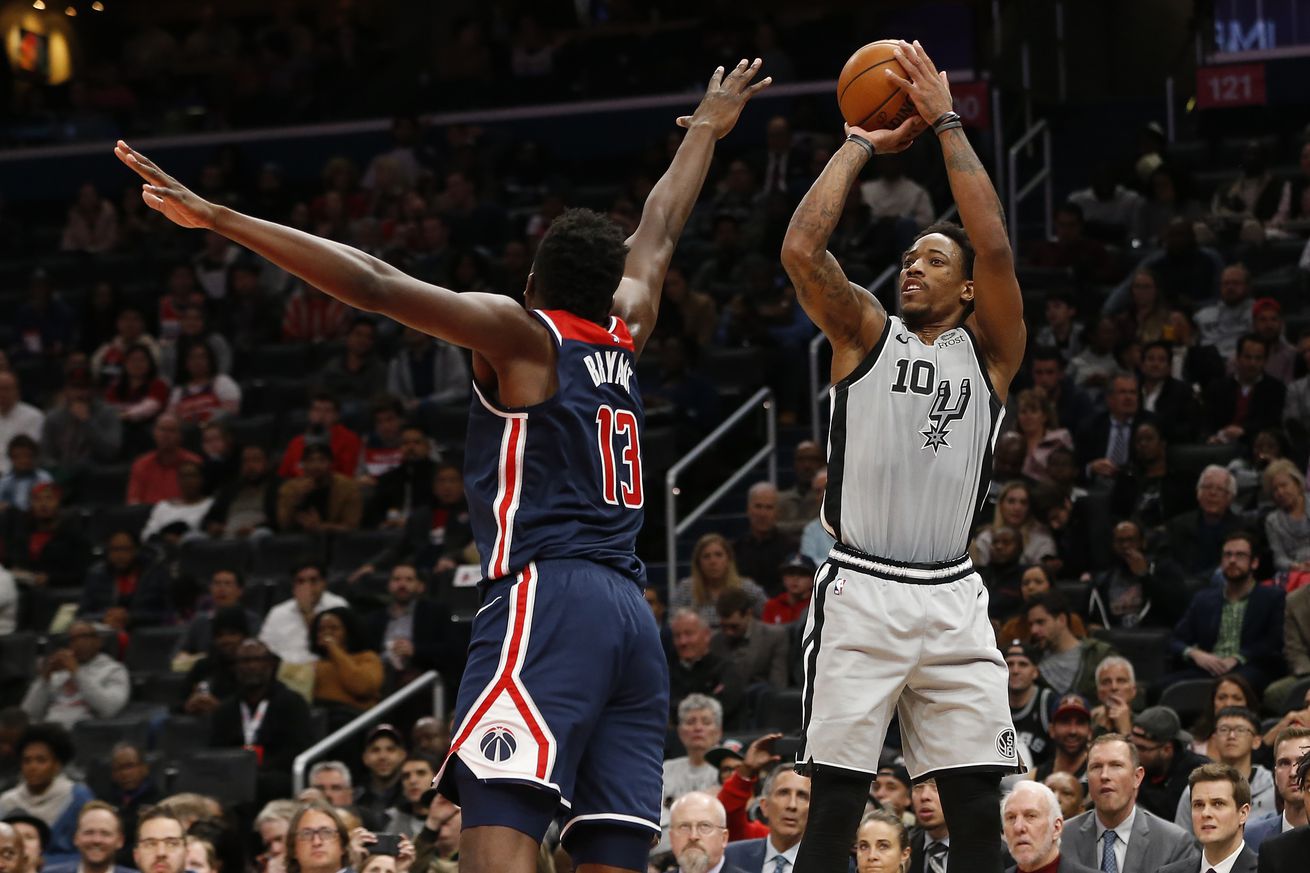 DeRozan continues to lead to the Spurs to one of the best offenses in the league. Let’s not talk about the defense.

DeMar DeRozan has scored 67 points on only 33 shots over the past two games. He’s also grabbed 12 rebounds and 9 assists to only 2 turnovers during that span. What’s more impressive (though some might say frustrating) is he has been able to score that many points on that few of shots without attempting a single three-pointer.

DeRozan’s recent surge has upped his season stats to almost 22 points a game on 52.8 percent shooting. His True Shooting % of 59% would be nearly 4 percentage points higher than the next highest mark of his career. The San Antonio Spurs have the fourth best offense in terms of offensive efficiency, largely due to the play of DeRozan.

And yet the Spurs can’t win a game.

I’m not oblivious to what advanced stats say about DeRozan’s impact on the court. I realize he’s had some rough endings to games this season, but how am I supposed to criticize a guy putting up these kinds of offensive numbers when nobody else outside of Patty Mills has played up to their potential this season?

We knew what we were getting when DeRozan was traded to the Spurs, yet that didn’t keep the Spurs from finding a way to win games and make the playoffs last season. I just can’t get on board with any narrative that suggests DeRozan is in some way responsible for the Spurs’ 5-10 start to the season. It’s roughly the same team from last season — plus Dejounte Murray and minus Davis Bertans — so with DeRozan playing even better this season, the Spurs should be winning more game not less.

But alas, here we are. A bottom dweller in a stacked Western Conference. Maybe the West just got better and the Spurs haven’t taken a similar leap. Maybe the loss of Bertans is having an even bigger impact on the team than we had initially thought (advanced stats love Bertans). Maybe the Spurs simply overachieved last season and everybody is crashing back down to early. Or maybe Pop just hasn’t found the right rotations and eventually it will all come together for the Spurs.

DeRozan’s night against the Washington Wizards has to be put into context. The Spurs are very bad at defense. The Wizards are extremely bad at defense. I’d say these two teams play G-League level defense but that would be a disservice to those playing in the G-League. But at least DeRozan went out there and took advantage. He carved up the Wizards’ “defense” all night, ending up with a season-high 17 free throw attempts (it was actually the second most free throw attempts he’s had in a Spurs’ uniform).

DeRozan is doing what he needs to do to get the Spurs back to their usual winning ways. Hopefully the rest of the team follows soon.