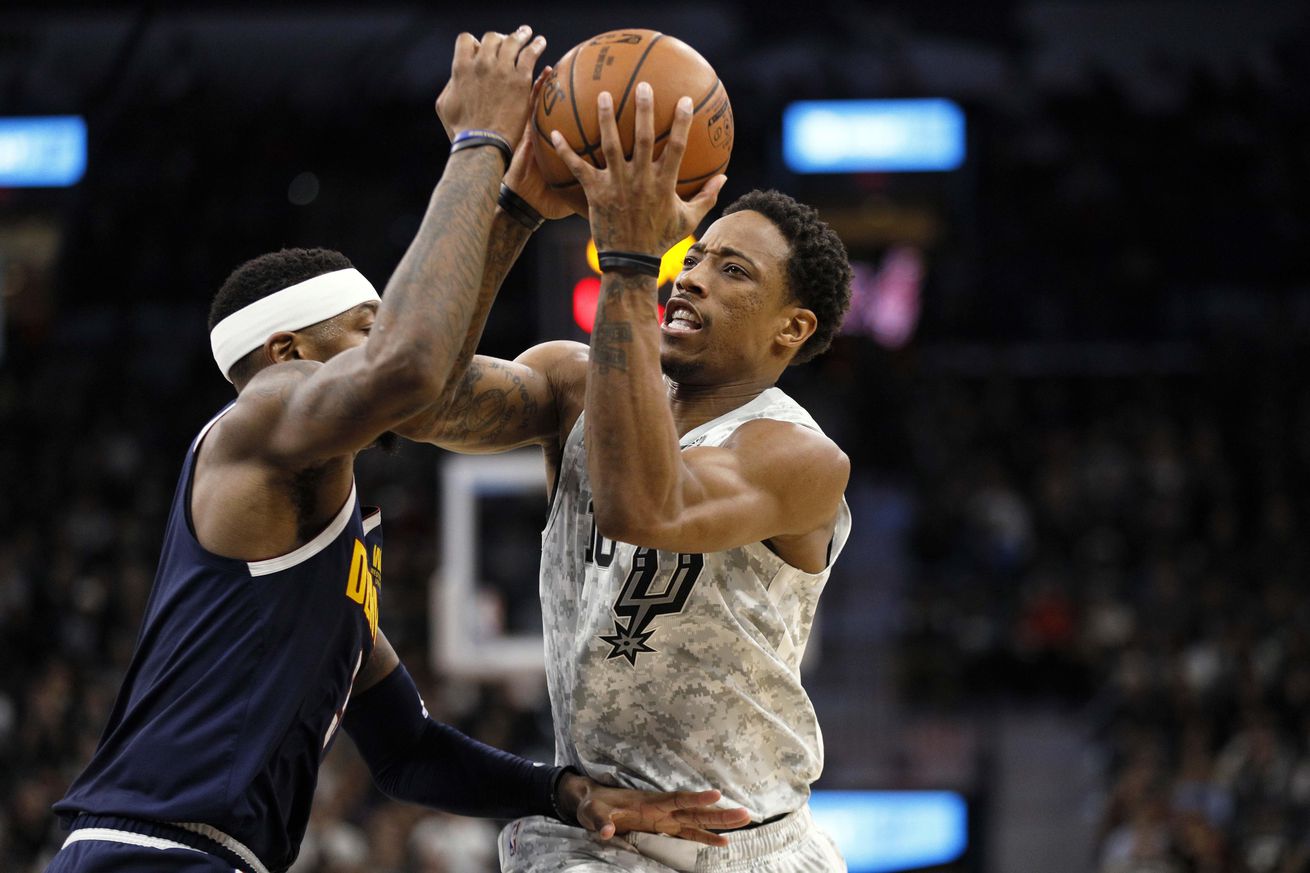 The Spurs only really played well for two quarters, but that was enough to get the win at home.

The Spurs continue to look like world beaters at home. Despite only playing well for two quarters they convincingly beat the shorthanded Nuggets 111-103 on Wednesday behind great performances by their stars, DeMar DeRozan and LaMarcus Aldridge.

It was a bit of an up-and-down game in which the Spurs showed both their best and worst facets. In the first period we saw the good version of the team, the one that has allowed them to win eight of their last 10 and made the AT&T Center one of the toughest arenas to visit in the league. They established LaMarcus Aldridge as a threat early on and played with discipline on both ends. Then when the bench checked in the offense received the boost it usually gets from the subs. With Davis Bertans and Marco Belinelli hitting some shots and the defense holding steady, the Spurs managed to get some separation by closing strong. Another blowout win wasn’t out of the question at that point.

Alas, the next two quarters saw the Spurs prove that they are still a work in progress. With Rudy Gay looking uncharacteristically inept on both ends and the Nuggets playing two centers at the same time, Gregg Popovich strayed from his normal rotations by playing Jakob Poeltl and Aldridge together, with Bertans at small forward. The offense cratered and the defense went away from the quickness that has defined it in recent weeks. Denver closed the half better and made up for the ground it had lost in the opening frame.

In the third quarter the Spurs did a better job of preventing the easy turnovers that mired them earlier but couldn’t find the burst the offense needed to go on a run. The defense kept Nikola Jokic under control but wasn’t as sharp when it came to covering the role players. Neither team could really impose its will, which makes the completely bland 22-each score for the frame especially apt. It was a close game going into the final period, with the Spurs up two but not looking particularly good.

Fortunately things changed in the fourth quarter. It was as if the entire team and coaching staff remembered at the same time what makes this team tough to beat at home. Pop quickly went small with four guards around Jakob Poeltl. The perimeter players flew around on their own end and spaced the floor for Jakob to puncture the defense on dives to the basket on offense. Before the Nuggets knew what had hit them, the Spurs had gone on a 14-0 run. Denver couldn’t respond and with three minutes to go and San Antonio up 15, Coach Michael Malone emptied his bench. The subs made an attempt at a comeback that gave Pop a scare, but would ultimately fall short.

Two good quarters were enough for the Spurs against a Nuggets team missing three key players in Paul Millsap, Gary Harris and Will Barton. They likely won’t be enough against tougher opponents, especially away from San Antonio. The lack of consistency and the sheer quickness with which the team can fall back into bad habits is still a little concerning.

Yet the fact that this group can put together dominant quarters with ease in the first place represents progress from earlier in the year. The Spurs have made a huge leap as a team and are establishing their identity at the right time, despite some still too common lapses. Wins like the one against the Nuggets serve as proof that, while they still have work to do, they are on the right track.

Up next: @ Nuggets on Friday

The Spurs and Nuggets will complete the home-and-home set in Denver on Friday. The Nuggets will still be shorthanded but Nikola Jokic will surely have a better game than he did in San Antonio. The Spurs are also just 5-11 on the road, so it’s going to be a tough one.