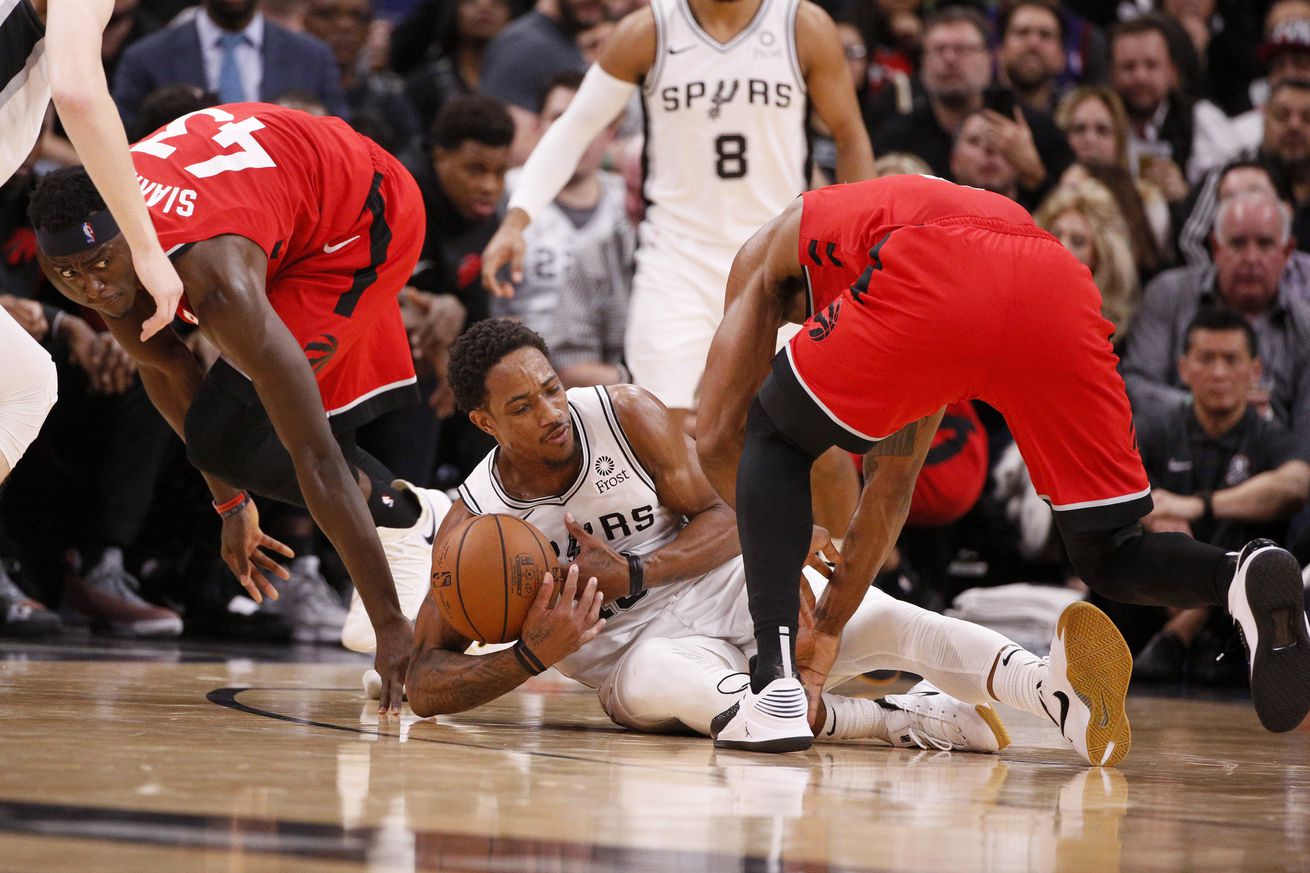 He may be exciting his slump, but the way his numbers dropped is illuminating.

DeMar DeRozan has had a rough January. After kicking the new year off with the first triple double of his career in the Spurs’ runaway victory over the Raptors, the rest of the month has been a bumpy road. He’s had two other good performances, with a pair of 26 point outings against the Pistons and 76ers, but they were separated by a 6 game stretch where he averaged just over 13 points per game.

But he’s not worried, and there’s not really any reason to expect that he has suddenly forgetten how to score. He’s shooting just 41.8% from the floor in January, much worse than he had in October – December. But this is right in line with his career averages. During his time in the league, he’s started off hot, cooled off in January and February then surged in March and April.

But shooting hasn’t been the only place he’s struggled. DeMar’s free throw attempts have fallen dramatically as well. After averaging 6.3 free throws per game through the end of 2018, DeMar has taken just 3.6 per game in the 10 games he’s played in January. At least some of that has to do with being less aggressive.

Despite little change to his playing time or touches, his drives are down, from 19 per game to 17.6, and he’s shooting less often out of those opportunities, further decreasing the likelihood of getting to the line. Whether that’s a result of fatigue, good defense, or some other issue is hard to say, but the result is that he’s turning the ball over far more often.

It’s not just on drives, either. DeMar’s postups have dropped from 2.6 per game through December to 1.9 per game in January, but his turnover percentage on postups has skyrocketed from just 4% to 21.1%.

There are some sample size issues here, as we’re only talking about 10 games. Their schedule has been tough, especially for DeMar. Three games against Kawhi Leonard and Paul George could make anyone look suspect. But the difference in DeMar’s incredible December and forgettable January is clear. He managed to shoot less and pass more out of high leverage situations in December without getting fouled much less often or turning the ball over any more often.

January has not been so kind. Maybe December was an outlier, and this is just regression’s cold and inevitable embrace, but it’s not likely to continue at this rate. DeMar has never been a high turnover player – he hasn’t had a turnover rate this high since he was 22 – so the market correction, if that’s what it is, should end soon.

A deeper look at his turnover numbers doesn’t expose anything particularly troublesome. Despite turning it over much more often, there isn’t an obvious cause, other than maybe pressing a little because he isn’t shooting well. There’s no major change to the distribution of his turnovers by type.

A couple of percentage points here or there when comparing in season samples is nothing to be concerned about. We’re still only talking about 130 total turnovers, not nearly enough to draw sweeping conclusions. Watching the tape, though, shows why he’s turning the ball over more often and reveals some opportunities for improvement in his passing.

Disciplined defensive teams have caught on to DeMar’s desire to create shots for others, especially his willingness and ability to get into the air looking to pass. The Grizzlies, Thunder, Hornets and 76ers all did a great job of only collapsing when necessary, but then immediately recovering into passing lanes and back to the Spurs’ shooters as soon as he left the ground.

One of the key issues on these plays is that despite DeMar getting to valuable real estate and forcing help, the defense isn’t compromised. With his shooters covered, DeMar has to choose between trying to throw someone open or dropping it off to his big. He’s got a tiny window open to LaMarcus Aldridge and Jakob Poeltl, respectively, but that pass has a high degree of difficulty, too.

He’s thrown a couple of bad entry passes, too.

Both of these passes are poor, which is an issue, but more importantly, he probably shouldn’t have thrown them in the first place. That’s more of a decision-making issue, something that has been a problem at other times as well.

There’s nothing wrong with trying to make a play. DeMar’s instincts, his ability to see and execute difficult plays, are a huge part of what has made him so good this year, but these are incredibly costly mistakes. There’s no worse outcome on offense than a live ball turnover. Given their defensive struggles, that’s doubly true for this team.

DeMar will likely get this back under control in the near future. He hasn’t had this much playmaking responsibility before and he was bound to have some hiccups. His poor shooting of late compounds the issue, too, as his drives and post ups aren’t nearly as threatening when he can’t get a bucket or draw a foul.

All of that should be temporary, though. DeMar’s shooting will come back around, and with it, most likely, a return to form on his forays to the basket. Once he’s scoring efficiently on those opportunities again, the passing lanes should open back up and his turnovers should go back down, which will go a long way toward getting the team back on track on both sides of the ball.