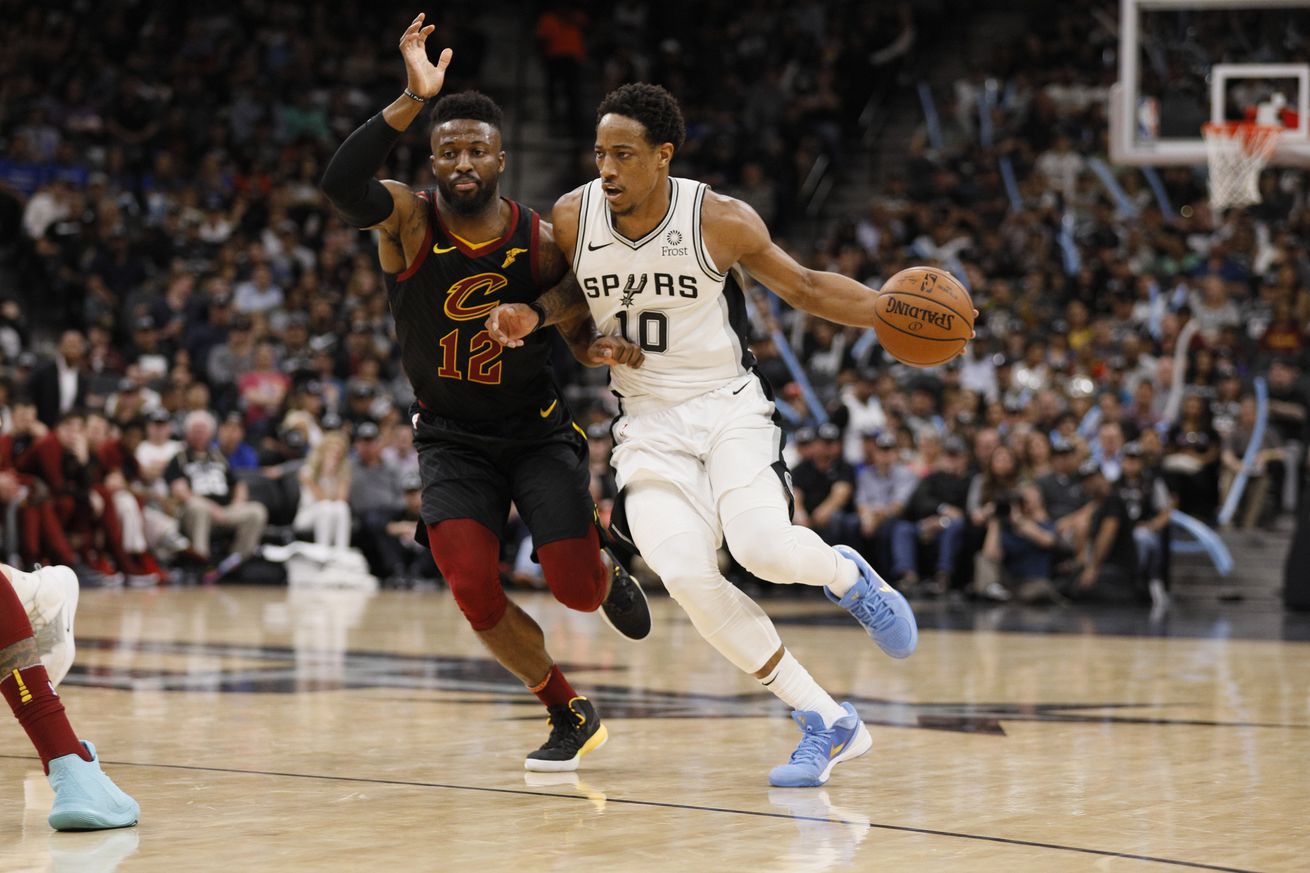 The Spurs needed a huge second half from their star wing to get past the pesky Cavaliers on Manu’s big night.

For a game that was supposed to be more prelude than main event, the matchup between the Spurs and the Cavaliers sure was plenty dramatic. The Silver and Black managed to come back to get a 116-110 win on Manu Ginobili’s big night, but they had to fight for it down to the last seconds.

From the start it was clear that something was off about the Spurs. Maybe the players were still feeling the effects of the long minutes they logged in the painful loss to the Hornets on Tuesday or maybe they too were convinced that the event that mattered was coming after the actual game, but the energy was lacking. LaMarcus Aldridge and DeMar DeRozan simply weren’t assertive on offense while the entire team looked a step too slow on defense. Through most of the fist half the Spurs were happy to take the shots the Cavaliers were forcing them into instead of attacking, and in the rare opportunities in which they did, they made lazy passes when facing help that were picked off. The Cavaliers, meanwhile, were playing loose and aggressive. With Collin Sexton in attack mode and a sharp Kevin Love, they were carving the Spurs up. San Antonio trailed by nine at the half, but the deficit could have been larger.

Changes were needed, and Gregg Popovich made a big one. Rudy Gay started the second half for Jakob Poeltl in a move likely geared to unclogging the paint. It worked. A suddenly dynamic DeRozan carried the team to a quick run to delete the Cavaliers’ lead at the start of the third quarter. The Spurs seemed to had figured things out, as the bench also started to play better. Their big pushes got them a six-point lead of their own in the third quarter and then a nine-point one in the fourth. Unfortunately the Cavs never went away, like everyone in the arena were surely hoping they would. They just kept capitalizing on mistakes and attacking a defense that remained passive for most of the night. Love faded in the second half, as his teammates inexplicably didn’t find him more, but Larry Nance Jr. and Brandon Knight picked up the slack. The teams traded buckets for a while, as neither could string together enough stops to create separation.

It was fitting that in Manu’s night, two of his biggest friends on the team would end up playing huge roles in giving the Spurs the win in the final minutes. After Love cut the lead to one with under two minutes to go, Marco Belinelli hit a jumper to keep San Antonio ahead by three. Following a pretty Nance bucket and a couple of misses by Gay and Cedi Osman, Patty Mills hit a corner three of a gorgeous DeRozan feed to put the Spurs up four with just 14 seconds to go and essentially seal the game.

The eruption from the Big Three in the stands after that clutch bucket made an otherwise frustrating performance by the Spurs worth it. I’m sure we all wanted a relaxing blowout that allowed for nostalgia to fully take over, but watching the AT&T Center rocking in a close game while Tim Duncan, Manu Ginobili and Tony Parker celebrate from the stands was an even better ending to the basketball portion of the night, without a doubt.

Up next: Vs. the Kings on Sunday

The Spurs will have the chance to punch their ticket to the playoffs with a win over Sacramento on March 31 at 6:00 pm.