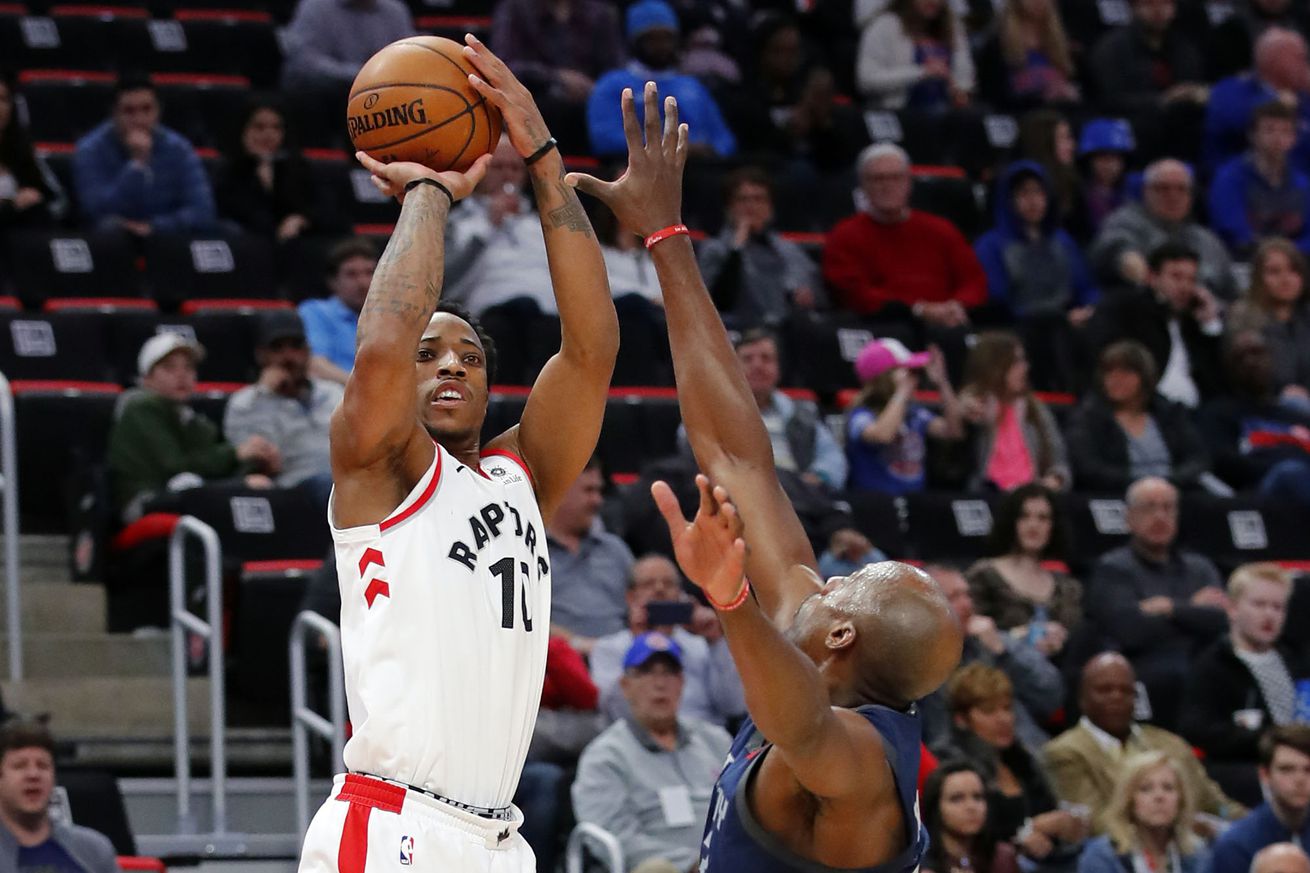 A fact that the Spurs are certain to exploit this season.

The conventional wisdom that DeMar DeRozan isn’t a great shooter from distance comes up time and again when discussing the Spurs upcoming season. Even LaMarcus Aldridge got in on the conversation, posting this on his Instagram.

Good thing I’ve been working on that 3ball

First, that’s pretty funny. LaMarcus definitely has the ability to take and make more threes, though it’ll be interesting to see whether and how Coach Pop works it into the offense. Aside from that, there’s a chance that all these concerns are a little overblown, at least when it comes to one of the most valuable shots in basketball.

Here’s a look a DeMar’s shotchart from each season of his career.

There’s an awful lot of blue outside the arc, but you can see that DeMar has both increased his attempts from three and shown the ability to hit at or above league average from several areas, albeit on a pretty low number of attempts. Still, at just 28.8%, his career percentage from three is not good.

If we focus in on the corners, though, the numbers get a lot better. He’s made 160 out of 441 corner threes in his career, or 36.3%. If we exclude his first few years in the league, when he shot less than 40 per year, his average increases to 37.3%, having hit 131/352 attempts over the last four seasons. That’s actually above league average, which was 36.2% last year.

The bad news is that he shot far worse than that last year, hitting just 28.9% from the corner, making it difficult to believe he’s made real progress — but it’s not quite as bad as it seems. I took the time to watch virtually every single one of his 287 three point attempts from last year (video for a handful of them isn’t available), and it’s clear there are several reasons for his dip in accuracy.

His shot profile was significantly different last year in several respects. He took far more off-the-dribble, pull-up, stepback, and turnaround threes than ever before, and went 8/31 on those shots in the corner. That easily surpassed his previous high for unassisted threes from that location, having never made more than 3 in a year before. He took more late clock threes too, hitting just 8/42 overall with 3 seconds or less left on the shot clock or in the quarter, and went 2/8 in those situations from the corner.

His shot selection looks pretty bad, but part of the reason is that DeMar appears to be wholly unconcerned about his field goal percentage. He was the bail-out plan for Toronto’s offense last year, and he embraced the role. He would frequently get the ball at the end of a broken play with the defense set and ready. It’s a testament to his handle, footwork, and release that he was able to even get a look in those situations.

Here are a couple of examples.

He also takes end-of-quarter heaves just before time expires, though he wasn’t particularly good at them, going 0/10 from 30 feet or farther as time expired.

Product of the system

The other problem with assessing his shot selection is that it seems like Toronto wanted him to shoot threes. He had a green light to shoot anytime the defender went under a screen, and pulled up early in the shot clock far more than you’d expect a career 29% 3-pt shooter to do.

The team also ran plays specifically designed to get DeMar an open look from three. Some of that may have been dependent on the situation, as Toronto was a very good offensive rebounding team, especially when Jonas Valanciunas was on the floor.

In watching all that film, DeMar’s awareness of spacing stood out to me. He consistently found open spots along the perimeter whenever he wasn’t actively involved in a play, and often served as an outlet valve for penetration that couldn’t quite get to the basket. That led to him shooting against an aggressive close-out quite often. He could have benefited from employing his outstanding shot fake more in those situations and either side-stepping for an open look or attacking a compromised defense.

He also appears to actively seek out two-for-one opportunities. He took 25 threes last year with between 28 and 40 seconds remaining in the quarter (1 of 6 from the corner), and watching those plays, it looks intentional. It’s pretty likely that will continue with the Spurs.

His shot selection should improve, as the Spurs tend to prefer running second and third actions as opposed to settling for the first good shot they find. DeMar will probably split bail-out duty with LaMarcus and Rudy, which should help both the offense and DeMar’s numbers quite a bit. It’s also to be expected that the Spurs will have a different approach to how and when he shoots pull-up threes, though he may need to continue shooting some to make other teams at least consider going over picks.

Individually, there are a few things DeMar could work on to improve his three point shooting. He has excellent footwork, in that he can get a relatively good look against very good defense using just about every trick in the book. He’s got step backs going both direction, side steps and hops, turnarounds, and more, but he’s often slightly off balance as he goes into his shooting motion and fading away from the basket or to the side. He’s not a good enough shooter for those to be high-value looks unless he can reduce that extra movement.

He also needs to figure out which footwork he prefers to get into his catch and shoot motion. He uses both the hop and the 1-2 step, and just a rhythm dip sometimes when the pass is on target. He was far less accurate using the hop last year. He had 56 catch and shoot attempts from the corner, and went 2 of 15 using the hop, and 16 of 41 using the other two.

If you watch Spurs shooters, you’ll see they almost always use the footwork that puts them in position to shoot with the least amount of motion, meaning they frequently won’t move their feet at all if the pass is on target. It may not happen this year, but expect the team to help DeMar simplify his motion on catch and shoot attempts.

All in all, there’s a lot more to like about DeMar’s three-point shooting than his raw numbers would suggest, and he still has plenty of room for improvement. He’ll never be Steph Curry, but he doesn’t need to be. Given everything else he brings to the table on offense, if he can just knock down the corner three, that should be good enough for the Spurs.